Thanksgiving Day through midnight Sunday (Nov. 27–30) we are having our annual SKEPTIC FRIDAY sale (pace the national “Black Friday” supersale that always follows Thanksgiving at retail outlets around the country), that includes *25% off any and all items in our catalogue including: books, DVDs, CDs, videos, T-shirts, pins, and back issues of Skeptic magazine, and $10 off subscriptions and gift subscriptions.

NOTE: To get the discount you must write in “Skeptic Friday” in the
“Customer Comments” box in the online order form at Shop Skeptic.

*25% discount not applicable to subscriptions.
Discounts won’t show up on the invoice,
but will be applied before your credit card is charged.
Sale ends at midnight PST, Nov. 30, 2008)

In this week’s SkepticBlog, Michael Shermer proposes a challenge to his readers: find a passage from any ancient text, not just the Bible (although you can use that as well), that appears to match a scientific principle, law, fact, or discovery and then submit your entry as a comment to this week’s SkepticBlog post.

Best would be to comb through any ancient myth or tale or story that predates the scientific concept. This will “prove” that the selected text is supernaturally inspired (how else would ancient authors know about the scientific discovery?). For example, in the biblical Book of Job, two passages read as follows:

9:7 Which commandeth the sun, and it riseth not; and sealeth up the stars.

9:8 Which alone spreadeth out the heavens, and treadeth upon the waves of the sea.

Some believers think that 9:8 means the expanding universe. If so, wouldn’t 9:7 represent a collapsing universe?

But, this challenge is not restricted to the Bible; using any literary source, find passages that seem to match scientific discoveries. READ on to find out how this challenge came about and then… 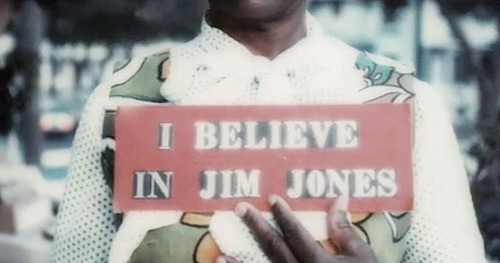 film still from Jonestown: The Life and Death of Peoples Temple

From Jonestown to tribalism to presidential politics, individuals seek the like-minded. On this day 30 years ago in the jungles of Guyana, Jim Jones, leader of the Peoples Temple cult, ordered the mass suicide or murder of more than 900 of his own followers by inducing them to imbibe cyanide-laced punch or by lethal injection. He had controlled nearly all information coming into the group and warned them daily that “they” (the government, imperialists, greedy capitalists, etc.) were the enemy. So when Rep. Leo Ryan and his investigative team showed up in Guyana, Jones’ followers were primed to believe that “they” were coming to destroy them and had to be stopped. After the congressman and others in his party were killed, Jones told cult members that “they” would now really come down on them, and their only choice was to move on to the next stage of life… READ the full Op Ed >