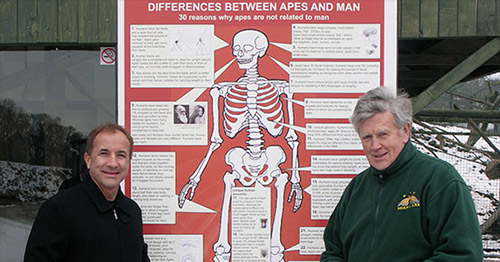 Michael Shermer and Mr. Anthony Bush, the curator and administrator of Noah’s Ark Zoo Farm, discuss the differences between apes and humans.

A Skeptic Goes Inside Noah’s Ark

Michael Shermer goes into the belly of the beast for creationists — Noah’s Ark — during his lecture tour of England during the Darwin celebrations the first two weeks of February, taking in Noah’s Ark Zoo Farm, a zoo dedicated to teaching the school children of England that the biblical story of creation is supported by science, or at least the science according to the zoo’s curator.

Dr. Joel Smith has been added to the
Darwin Celebration at Caltech

Dr. Joel Smith is a post-doctoral scholar in the biology department at Caltech, specializing in bio logical information processing, stem cell and cancer biology, and the evolution of development (evo-devo). Dr. Smith’s talk is on:

Darwin in the Age of Systems Biology

Consider the numbers involved in evolution: four billion years of evolving life forms, millions of years to create new species, 100 trillion cells in the human body, 3.3 billion genetic “letters” in the human genome, along with the uncounted number of species and uncountable number of chemical reactions per second in each cell. This is the subject of systems biology, which allows us to deal with the complexity of individual organisms through the construction of Regulatory Networks, detailed logic maps of the “circuitry” of living organisms. By comparing Regulatory Networks from different species we can see how the program has changed over the course of evolution, and we can identify the precise changes in DNA sequences that have created those changes.

the Spring Season of Lectures at Caltech

Mark your calendar! The Skeptics Society is pleased to announce its Spring 2009 season of the Skeptics Distinguished Lecture Series at Caltech. This continues the fifteen-year-long series, presenting over 200 lectures by some of the most distinguished experts in the world.

All of the following lectures are on a Sunday at 2 pm at Baxter Lecture Hall. Tickets are sold on a first come first served basis at the door. Sorry, no advance ticket sales. Seating is limited. $8 Skeptics Society members & Caltech/JPL Community; $10 General Public