One of the most difficult problems in the social sciences is understanding why some people intentionally inflict emotional and physical pain on others. Such intentional pain occurs not only on a local level — within families, with “friends,” or in work situations, but also on a national and international scale — Hitler’s Holocaust, Stalin’s purges, and Chairman Mao’s slaughter of millions. Neuroscience is providing the potential for a revolution in our understanding of why “bad” people do what they do…

In this week’s eSkeptic, in the midst of the gay marriage controversy sweeping across the nation (as individual states are changing their constitutional minds about what constitutes marriage), we present an interesting article by Barrett Brown that demolishes the silly notion proffered by some conservatives that gay marriage decreases straight marriage rates.

Barrett Brown is the author of Flock of Dodos: Behind Modern Creationism, Intelligent Design, and the Easter Bunny and serves as director of communications for Enlighten the Vote, a political action committee dedicated to promoting the Establishment Clause of the First Amendment. His work has appeared in dozens of publications including National Lampoon, The Onion A.V. Club, McSweeney’s, American Atheist, and The Fortean Times. 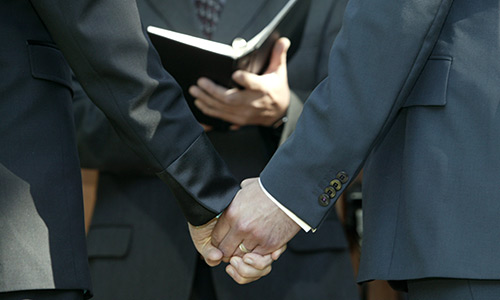 Adventures in Math & Marriage
or, Why Gay Marriage Does Not
Decrease Straight Marriage

Does the legalization of gay marriage contribute to the decline of heterosexual marriage? A good portion of our fair republic’s cultural conservatives seem to believe that it does. Evangelical kingpin James Dobson, head of Focus on the Family, told a typically credulous Larry King in November of 2006:

If what Dobson says is true, New Jersey is going to be in huge trouble, and Massachusetts, which legalized gay marriage in 2004, must already be. Of course, Dobson is wrong. Here’s why.

First, let’s think about this problem mathematically and prepare our variables. X is any country “where they have tried to define marriage [to include gay couples],” in Dobson’s description. Y is the marriage rate among heterosexuals before country X has “tried to define marriage [to include gay couples],” and Z is the allegedly decreasing heterosexual marriage rate that exists after ten years of gay civil unions. The Dobson Theorem, as we shall call it, states that “if X, then Y must be greater than Z.” Or, translating math into English, “if a nation allows for civil unions, the marriage rate among heterosexuals at the time that this occurs will be higher than it is ten years later.”

Let us now test the Dobson Theorem. Like most things with variables, the Dobson Theorem requires that X be substituted for various things that meet the parameters of X—in this case, northern European countries. Luckily, Dr. Dobson himself has provided us with some data. During the Larry King interview, Dobson mentioned Norway and “other Scandinavian countries” as fitting the description. We’ll also need values to punch in for Y and Z. These may be obtained from all of the countries in question, which have famously nosy governments. Conveniently enough, these numbers may also be obtained from the October 26, 2008 edition of the Wall Street Journal op-ed page, where William N. Eskridge, Jr., the John A. Garver professor of jurisprudence at Yale University, and Darren Spedale, a New York investment banker, penned an editorial based on their new book entitled Gay Marriage: For Better or For Worse? What We’ve Learned From the Evidence.

The culprit may be the Weekly Standard and National Review gadfly Stanley Kurtz, who took issue with Garver and Eskridge’s preliminary findings back in 2004, before they were published. Confronted with statistics indicating that marriage in Scandinavia is in fine shape, Kurtz instead proclaimed that “Scandinavian marriage is now so weak that statistics on marriage and divorce no longer mean what they used to.” Brushing aside numbers showing that Danish marriage was up ten percent from 1990 to 1996, Kurtz countered that “just-released marriage rates for 2001 show declines in Sweden and Denmark.” He failed to note that they were down in 2001 for quite a few places, including the United States, which of course had no civil unions anywhere in 2001. And having not yet had access to the figures, he couldn’t have known that both American and Scandinavian rates went back up in 2002. As for Norway, he says, the higher marriage rate “has more to do with the institution’s decline than with any renaissance. Much of the increase in Norway’s marriage rate is driven by older couples ‘catching up.’” It’s unclear exactly how old these “older couples” may be, but at any rate, Kurtz thinks their marriages simply don’t count. But even if we arbitrarily strike such nuptials from the record, we’re still left with an increase in Norway’s marriage rate, as Kurtz himself acknowledges that these oldster nuptials only constitute “much” of the increase, not all of it or even most of it. So Kurtz’s position is that Norwegian marriage is in decline because not only are younger couples getting married at a higher rate, but older couples are as well.

Kurtz applies a similar level of statistical acumen to divorce rates. “It’s true that in Denmark, as elsewhere in Scandinavia, divorce numbers looked better in the nineties,” he wrote. “But that’s because the pool of married people has been shrinking for some time. You can’t divorce without first getting married.” This is true. It’s also true that Denmark has a much lower divorce rate than the United States as a percentage of married couples, a method of calculation that makes the size of the married people pool irrelevant. Denmark’s percentage is 44.5, while the United States is at 54.8 percent. Incidentally, those numbers come from the Heritage Foundation, which also sponsors reports on the danger that gay marriage poses to the heterosexual marriage rate.

Still, Kurtz is upset that many Scandinavian children are born out of wedlock. “About 60 percent of first-born children in Denmark now have unmarried parents,” he says. He doesn’t give us the percentage of second-born children who have unmarried parents, because that percentage is lower and would thus indicate that Scandinavian parents often marry after having their first child, as Kurtz himself later notes in the course of predicting that this will no longer be the case as gay civil unions continue to take their non-existent toll on Scandinavian marriage.

Since the rate by which Scandinavian couples have children before getting married has been rising for decades, it’s hard to see what this has to do with the more recent advent of gay marriage—unless, of course, you happen to be Stanley Kurtz. “Scandinavia’s out-of-wedlock birthrates may have risen more rapidly in the seventies, when marriage began its slide. But the push of that rate past the 50 percent mark during the nineties was in many ways more disturbing.” Of course it was more disturbing to Kurtz. By the mid-1990s, the Scandinavians had all instituted civil unions, and thus even the clear, long-established trajectory of such a trend as premature baby-bearing can be laid at the feet of the gays simply by establishing some arbitrary numerical benchmark that was probably going to be reached anyway, calling this milestone “in many ways more disturbing,” and hinting that all of this is somehow the fault of the gays.

By the same token, I can prove that the establishment of the Weekly Standard in 1995 has contributed to rampant world population growth. Sure, that population growth has been increasing steadily for decades, but the push of that number past the 6 billion mark in 2000 was “in many ways more disturbing” to me for some weird reason that I can’t quite pin down. Of course, this is faulty reasoning. One could just as reasonably argue that by virtue of its unparalleled support for the invasion of Iraq, the Weekly Standard has actually done its part to keep world population down. 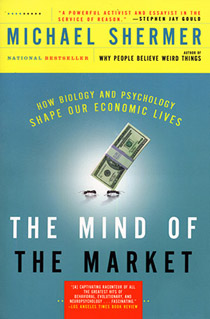 Shermer explains how evolution shaped the modern economy and why people are so irrational about money. How did we make the leap from ancient hunter-gatherers to modern consumers and traders? Why do people get so emotional and irrational about bottom-line financial and business decisions? Is the capitalist marketplace a sort of Darwinian organism, evolved through natural selection as the fittest way to satisfy our needs? In this eye-opening exploration, Shermer uncovers the evolutionary roots of our economic behavior. Drawing on the new field of neuroeconomics, Shermer investigates what brain scans reveal about bargaining, snap purchases, and establishing trust in business…

To request a signed copy, simply add a note in the ‘comments’ field during the checkout process. Please specify what you’d like the personalized autograph to say.

The Other ‘L’ Word: Why I am a Libertarian

Although the Skeptics Society is apolitical, Michael Shermer sometimes explores political and economic issues in his blog posts. In this week’s SkepticBlog, Shermer addresses critics by explaining why he is a Libertarian and what the ‘L’ word really means.