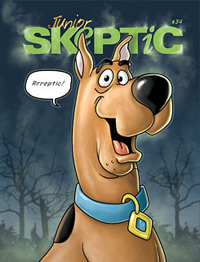 Junior Skeptic: Everything I Needed to Know about Skepticism, I Learned from Scooby-Doo!

How did one of history’s purest skeptical TV shows become one of the most beloved fictional creations of all time? And, what important lessons does this kids’ cartoon hold for skeptics today? Celebrate 40 years of Scooby-Doo!

This issue is based on the original, all-skeptical Scooby-Doo, Where Are You? series, and the equally skeptical recent revival, What’s New, Scooby-Doo?

These series are available in DVD collections from Amazon.com. Follow these links to the Amazon listings, and we will receive a referral commission on any purchase you happen to make.

Well, we were going to tell you about just one of the latest Mr. Deity episodes (from the amazing Brian Dalton) to hit the interwebs, but, they’re all so darn great…

In an episode inspired by Richard Dawkin’s The God Delusion, Mr. Deity returns from Vegas where he has become convinced that Penn & Teller are magical beings.
WATCH this episode
WATCH previous episodes

Larry asks Mr. Deity about the Baptism of Fire.
WATCH this episode

Mr. Deity explains why Jesus rode into Jerusalem on a Donkey.
WATCH this episode

Larry/Deity is a weekly series of one-to-two minute questions and answers. In the next episode, Larry asks Mr. Deity, “Did you really say, ‘An eye for an eye and a tooth for a tooth’?”

In this week’s eSkeptic, Andrew Shaindlin reviews Linked: How Everything Is Connected to Everything Else and What It Means for Business, Science, and Everyday Life by Albert-Laszlo Barabasi.

Andrew Shaindlin is the Executive Director of the Caltech Alumni Association and Acting Assistant Vice President for Development at the California Institute of Technology in Pasadena, CA. He holds a bachelor’s degree from Brown University and is completing his master’s in education at Claremont Graduate University. He is the author of numerous articles and book chapters on technology in fundraising and alumni relations and regularly speaks on that topic to fellow education professionals. He is also the author of Alumni Futures, a blog for higher education professionals. 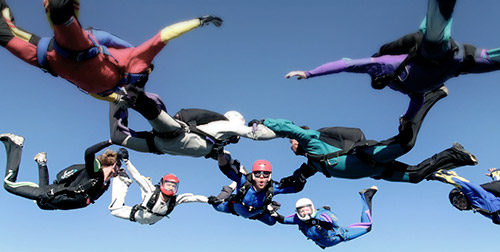 Linked: How Everything is Connected

a book review by Andrew Shaindlin

Here in Los Angeles celebrity sightings are a dime a dozen, but add the dimension of time and you get a combined parlor game and history lesson. The parlor game is the famous “six degrees of separation” (AKA in Tinsletown “six degrees of Kevin Bacon”): name a famous individual and trace the shortest possible line of personal connection to that person.

The “six degrees of separation” moniker was popularized by John Guare’s play of the same name, but has a longer pedigree. In the 1960s social psychologist Stanley Milgram attempted to measure the connectedness of individuals who are widely separated in social time and space. His experiment, the methodology of which has since been scrutinized, appeared to show that in some sense we live in a “small world,” where people of different social status and separated by thousands of miles, may well be more closely connected to each other than we might assume. 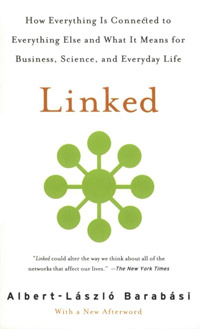 In the last several years, a spate of popular works has examined the so-called new science of networks, and using mathematics and logic theory, has sharply defined just how connected to each other we all are, and how an understanding of these networks’ shapes can improve business effectiveness, professional networking, and even personal relationships.

But let’s back up for a minute. Did we say six degrees of separation? Never mind six degrees. Six degrees is for wimps. To wit, I’m two degrees from Adolf Hitler. When I was 11, my father took me backstage after a performance led by illustrious Austrian conductor Karl Boehm, then 81 years old. Boehm had known and supported Adolf Hitler during his ascent to the leadership of the National Socialist Party. The hand I shook had warmly clasped the Fuhrer’s hand many decades before.

Of course, if you’re not a history buff, Hitler may not impress you. Maybe you’re into sports. Here I’m two degrees from Babe Ruth. As a little girl in the Bronx, my mother’s best childhood friend, Hedda, played hooky from school and sometimes encountered the Bambino in her neighborhood. He sat on a stoop and bounced young Hedda on his knee. I’ve known Hedda since my childhood, but only recently did I learn that, thanks to her, The Sultan of Swat was part of my social network.

But what does it matter how connected we are to someone? After all, we often hear that it’s not what you know, it’s who you know. But whom do you have to know for a specific purpose? To take my personal anecdotes, if I wanted to get Yankee tickets, knowing someone who could phone up Hitler wouldn’t do me any good. But the issue isn’t really who your connections are; it’s being able to identify them as connections in the first place. This is where Albert-Laszlo Barabasi’s work comes in. 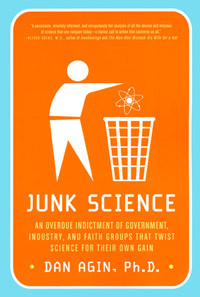 In this provocative, wide-ranging, and hard-hitting book, University of Chicago biology professor Dan Agin argues from the center that we will pay a heavy price for the follies of people who consciously twist the public’s understanding of the real world. ORDER the book

Linked breaks the six degrees mythos into its constituent parts, explains early efforts to measure just how connected total strangers really are, and brings the reader a simple explanation of the mathematical concepts underlying the “new science of networks.” It succeeds admirably in two ways: first, in balancing the technical background of network science with its popular relevance, and second, in illuminating the connections among seemingly disparate fields where network science is hard at work today. This genre is becoming more crowded all the time. Duncan Watts tackled it with his book Six Degrees: The Science of a Connected Age (W.W. Norton, 2003). And Watts combined forces with Barabasi and Mark Newman to produce The Structure and Dynamics of Networks (Princeton University, 2006), a more technical treatment of the math these researchers use to unravel the secrets of network behavior. Other recent, similar works use title words like “sync,” “nexus,” and “emergence” to treat related themes.

Where Barabasi (a professor of theoretical condensed matter physics at Northeastern University) beats his competition — and his collaborators — is in making the science accessible. Drawing on lessons and examples from sociology, medicine, law enforcement, and economics, he shows the practical value of understanding how networks behave. Perhaps the most prominent example is the effect of network structures on something as fundamental as circles of friends. Barabasi takes a well-known social construct — the strength of weak ties — and demonstrates its potential quantitative value. In the 1970s, sociologist Mark Granovetter posited that your close circle of friends and colleagues isn’t as valuable as you assume it to be when it’s time to network for something like a new job. Rather, it’s your friends’ and colleagues’ acquaintances, who you actually don’t know well, who add the greatest value to your network. Why?

This is simply because the people who are closest to you socially know most of the same people who you already know, and therefore cannot provide much information you don’t already have. But more remote acquaintances (such as friends of friends, or your own former co-workers) can provide new contacts that may reveal opportunities you won’t know about if you only talk to your immediate family, current co-workers and next-door neighbors.

The growth of Internet social networks like LinkedIn and Facebook makes this field of research timely and relevant. Using these services, it’s easy to visualize not only who our second- and third-degree acquaintances are, but also how we are connected to them. When we want to reach out to a potential business partner, it’s nice to know that we have the choice of asking a professional colleague or a family member for an introduction (and if we’re desperate, or lack confidence, we can ask both!). 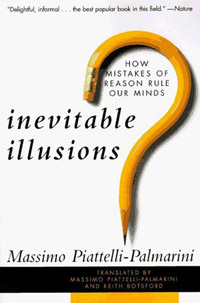 The seven deadly mental sins: cognitive traps that everyone (even you!) will inevitably fall into-plus how to avoid these “mental tunnels.”
ORDER the book

Another important arena that Barabasi explores effectively is the role of network science in financial markets. A better understanding of the links among firms and financial interests is more important than ever, now that credit default swaps and multi-billion dollar ponzi schemes are the order of the day. Describing the market as a “directed network” where not only the connections, but the direction of information flow among network members (or “nodes”) is clear, Barabasi provides the everyday reader with important tools for understanding why — and to what degree — it matters what happens in banking, investment and credit markets.

Creeping in around the edges of the seemingly cut and dried math behind network science is a whisper of social engineering. British anthropologist/biologist Robin Dunbar has written about the relationship between neocortex size and social network scale, lifting ever so slightly the lid on the question of whether social network scale is somehow hardwired into humans as an evolutionary variable (see for example, his chapter “Brains on Two Legs: Group Size and the Evolution of Intelligence” in Tree of Origin: What Primate Behavior Can Tell Us about Human Social Evolution (Harvard, 2001). In much the same way that Milgram’s six degrees construct caught the popular imagination, we can expect a spate of books in the near future that posit how many people we should have in our networks, in order to function optimally on the social networking scene. Indeed, popular business titles such as The Power of Who: You Already Know Everyone You Need to Know (Center Street, 2009) with its “100/40 principle” already claim to deliver specific ratios to maintain when building (or culling) one’s connections.

There is a cognitive risk in this kind of scorekeeping. We should not become so caught up in the quantitative aspects of network science that we lose sight of its fundamentally human character. Back in the Bronx in 1927, knowing a thousand people who lived on River Avenue wouldn’t have given you as good a chance for Yankee tickets as knowing which one of them was connected to the Maharajah of Mash himself, the one and only Babe Ruth.

As Barabasi vividly shows, finding the right needle in the social network haystack is as important as ever. But his research and others’ makes it easier for us not only to find the needle, but to use it to deploy the power of our networks.

Although the Skeptics Society is apolitical, Michael Shermer sometimes explores political and economic issues in his blog posts. In this week’s Skepticblog post, Michael Shermer discusses the issue of the collective versus the individual, a heated debate that arose among the three main speakers from the conference on evolutionary economics in Santiago, Chile: Ullrich Witt (a liberal economist from the Max Planck Institute in Jena, Germany), Kevin McCabe (a conservative economist from George Mason University, known for its unique free market leanings), and Michael Shermer (a “radical for liberty”).