Free Audio Download
of a Chapter from Why Darwin Matters 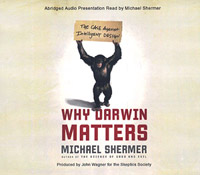 In the opening chapter of Why Darwin Matters, Michael Shermer recounts his voyage to and research in the Galapagos islands with Frank Sulloway as they retraced Darwin’s footsteps to better understand how the British naturalist discovered natural selection; Shermer then explains what evolution is, and how he began college as a creationist and how, in time, he came to realize that evolutionary theory was true and one of the greatest explanatory theories in the history of science. Listen to this chapter on your computer, iPod/iPhone, or MP3 player, and if you like it you can purchase the entire book for a modest price (compared to the normal price of audio books).

In this week’s eSkeptic, James N. Gardner reviews Complexity: A Guided Tour by Melanie Mitchell. James N. Gardner is an Oregon attorney and the author, most recently, of The Intelligent Universe: AI, ET, and the Emerging Mind of the Cosmos.

The best popular science books are those that give the reader the sense of looking over the shoulder of a leading researcher doing cutting-edge work at the frontier of scientific inquiry. Walter Isaacson’s recent biography of Einstein belongs in this category. So too does Melanie Mitchell’s comprehensive new book chronicling the latest advances in the sciences of complexity. 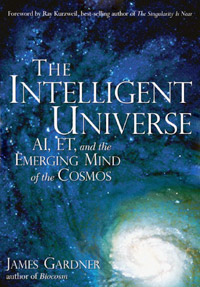 Mitchell, a professor of computer science at Portland State University and an External Professor at the famous Santa Fe Institute that specializes in the study of complexity, is one of the world’s leading experts in the field of genetic algorithm research. This is a special kind of computer science that has the audacious goal of coaxing software to evolve on its own through a process of natural selection that resembles Darwinian evolution.

Research into genetic algorithms is representative of the broad portfolio of disciplines comprising the sciences of complexity because it relies on a fusion of seemingly disparate scientific fields —computer science and evolutionary biology —to produce a hybrid possessing (in complexity lingo) emergent properties. For instance, evolutionary computation can yield solutions to seemingly intractable engineering challenges that no human designer could have imagined.

The pervasiveness, power and sheer intricacy of evolutionary forces is a unifying theme of Mitchell’s book and of the scientific breakthroughs she describes. Some of her best discussion focuses on the seething debate, largely shrouded from the eyes of laypersons, regarding the deficiencies of the so-called Modern Synthesis, which united Darwin’s theory of natural selection with Gregor Mendel’s path-breaking work in genetics. 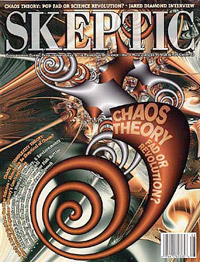 Check out Skeptic magazine Volume 8, Number 3: Chaos & Complexity. To see all of our products on this topic, go to skeptic.com/shop and enter the word complexity into the store search. ORDER this issue

Current research, made possible by new DNA sequencing technologies, is revealing that some of the fundamental tenets of the Modern Synthesis may be wrong or least seriously incomplete. For instance, the synthesis asserts that natural selection is the major mechanism of evolutionary change and adaptation; that evolution is an inherently gradual process reliant exclusively on small random variations in individuals; and that the origin of new species can be satisfactorily explained by the microscopic process of gene variation and natural selection.

As Mitchell demonstrates lucidly, these conclusions are being seriously undermined by researchers who are starting to view the phenomenon of evolution through the prism of the sciences of complexity. Here are just a few of the startling insights that have emerged:

The late physicist Heinz Pagels once wrote that he was “convinced that the nations and people who master the new sciences of complexity will become the economic, cultural, and political superpowers of the next century.” When you read Complexity: A Guided Tour, you will get a good sense of why Pagels reached that conclusion.

Derek recounts his many adventures as a TAM7 attendee, including his interviews and discussions with TAM Guests including Ray Hyman, Jennifer Oullette and MythBuster Adam Savage. Looking at this epic convention in a new way, Swoopy shares her impressions of following the conference from home via social networking websites such as Twitter, Facebook and uStream.

In this week’s Skepticblog post, Michael Shermer tells us about The Amazing Meeting 7 and Freedom Fest, both held this past weekend in Las Vegas.