a Chapter from Science Friction 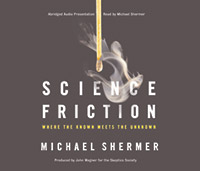 In a collection of essays, Dr. Michael Shermer explores the difference between the known and the unknown, and between science and pseudoscience, covering a wide range of topics with the common theme of how we know anything is true. In this free audio download from Chapter 1 of Science Friction, Dr. Shermer recounts his experiences as a psychic for a day, in which he pretended to be a psychic, astrologer, palm reader, and tarot card reader for a television show. He convinced a number of people that he could actually talk to their dead loved ones, read their astrological chart or palms, and divine their future through tarot cards. Dr. Shermer explains the process of cold reading, in which through tried-and-true techniques you can convince almost anyone that you have genuine psychic powers.
DOWNLOAD the sample MP3 (29MB) 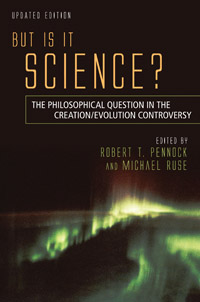 In this week’s eSkeptic, Glenn Branch reviews But Is It Science? The Philosophical Question in the Creation/Evolution Controversy. (Updated edition, edited by Robert T. Pennock and Michael Ruse).

Glenn Branch is deputy director of the National Center for Science Education, a non-profit organization that works to defend the teaching of evolution in the public schools. With Eugenie C. Scott he edited Not in Our Classrooms: Why Intelligent Design is Wrong for Our Schools. 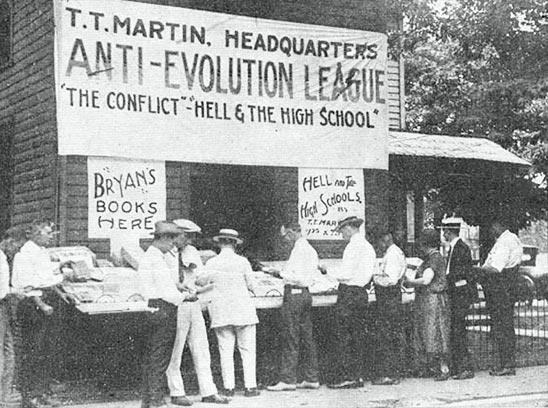 a book review by Glenn Branch

“Philosophy,” according to H. L. Mencken, “consists very largely of one philosopher arguing that all others are jackasses. He usually proves it, and I should add that he also usually proves that he is one himself.” At the Scopes trial, which Mencken covered for the Baltimore Sun, there were no philosophers testifying. It was not for want of trying. George Rappleyea, the impresario of the event, unsuccessfully attempted to recruit John Dewey to testify in defense of Scopes. In 1922, Dewey decried William Jennings Bryan’s “efforts to hold back biological inquiry and teaching,” which inspired Tennessee’s Butler Act, under which Scopes was prosecuted. But Rappleyea’s interest in the philosopher was probably just on account of his celebrity: earlier he had proposed to Scopes, “Why not bring a lot of doctors and preachers here? Let’s get H. G. Wells and a lot of big fellows.” The defense team eventually recruited a dozen expert witnesses, including neither Dewey nor Wells, but to no avail. On July 17, 1925, the judge ruled that the court would not hear expert testimony on either evolution or its consistency with Genesis. Mencken, writing, “All that remains of the great cause of the State of Tennessee against the infidel Scopes is the final business of bumping off the defendant,” promptly departed for Baltimore, thus managing to miss Clarence Darrow’s demolition of Bryan on the stand.

How would Mencken have reacted to the fact that in a 1982 sequel to the Scopes trial, McLean v. Arkansas, the court’s decision finding Arkansas’s Balanced Treatment for Creation-Science and Evolution-Science Act to be unconstitutional was heavily indebted to the expert testimony of a philosopher, Michael Ruse? Or to the fact that in a 2005 sequel to McLean — Kitzmiller v. Dover Area School District — no fewer than six people with doctoral degrees in philosophy were originally slated to testify as expert witnesses? Or to the fact that in Kitzmiller, four of the six were witnesses for the defense, and thus expected to testify in support of the Dover Area School District’s policy that “students will be made aware of gaps/problems in Darwin’s Theory and of other theories of evolution including, but not limited to, intelligent design”? Mencken surely would have been mordantly amused by the fate of those four. William A. Dembski and Stephen C. Meyer withdrew from the case, owing to a dispute between the Thomas More Law Center, which represented the district, and the Discovery Institute, the de facto institutional home of intelligent design creationism, and Warren Nord was never called to the stand. Only Steve Fuller, a philosopher-turned-sociologist, actually testified — so hyperkinetically that when a recess was called, the judge advised Fuller on his choice of refreshment: “Water or decaf only.” 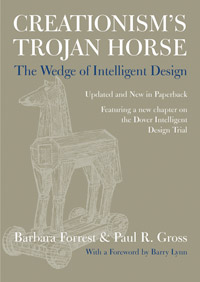 Two philosophers testified for the plaintiffs: Robert T. Pennock, whose Tower of Babel was the first, and is still a highly important, philosophical assessment of intelligent design creationism, and Barbara Forrest, who chronicled the activity of the intelligent design movement in her Creationism’s Trojan Horse (coauthored with Paul R. Gross). Forrest relentlessly exposed the creationist antecedents of intelligent design — even discovering the exemplary transitional form “cdesign proponentsists,” mistakenly formed when the authors of the intelligent design textbook Of Pandas and People incompletely cut-and-pasted “creationists” with “design proponents”. Pennock, for his part, concentrated on the philosophical issues. (As a result, he was dubbed “a serious, serious brainiac” by the York Daily Record’s Mike Argento, the H. L. Mencken of the Kitzmiller trial.) Like Ruse before him, Pennock explained the nature of science, arguing that creationism failed to qualify as a bona fide scientific endeavor, leading the court to conclude that, despite the claims of its proponents, creationism is not a credible scientific alternative to evolution and thus, as a religious view, cannot constitutionally be taught as such in the public schools. It is difficult to imagine a better coeditor for the updated edition of Ruse’s anthology But Is It Science? (published originally in 1988) than Robert Pennock.

The 1988 edition of But Is It Science? contained four sections, devoted respectively to

In the 2009 edition, there are three sections. The first, corresponding to (1) and (2), presents the religious, scientific, and philosophical background; a useful addition is a selection from Charles Hodge’s 1874 What Is Darwinism? that reveals the fundamentalist roots of creationism. The second, corresponding to (3) and (4), presents the McLean case and its philosophical aftermath; a useful addition is Barry R. Gross’s 1983 defense of Ruse’s testimony. Although a few articles from the 1988 edition have not been retained in the 2009 edition, the only regrettable omission is Ruse’s prefatory essay “A Philosopher’s Day in Court,” a personal statement about his involvement with the McLean case. 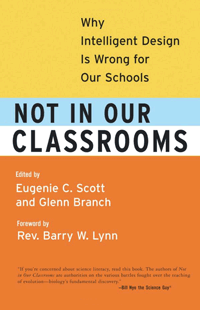 It is the third section of the 2009 edition of But Is It Science? — on intelligent design creationism and the Kitzmiller case — that warrants the update. Especially noteworthy are the selections written especially for the book, Nick Matzke’s “But Isn’t It Creationism?” and Pennock’s “Can’t Philosophers Tell the Difference between Science and Religion?” Matzke, who as a staff member at the National Center for Science Education (where I work) assisted the plaintiffs in the Kitzmiller trial, examined the prehistory of the intelligent design movement in detail while preparing for the case. The assumption that intelligent design is a product of the 1990s is common, thanks in part to the writings of the godfather of intelligent design, Phillip Johnson, throughout the decade. (He is here represented by the 1993 article “What is Darwinism?” — which answers its eponymous question in much the same way as did Hodge’s book of the same title.) Matzke, however, convincingly argues that intelligent design was assembled in all but name “between 1982 and 1984: salvaged from the ruins of the creation scientists’ spectacular collapse in the McLean trial, and retooled in preparation” for the next case, Edwards v. Aguillard, which reached the Supreme Court in 1987. The history of the intelligent design movement is still not completely understood, since the main players have no incentive to be candid about the events, but no further work on it will be complete without reckoning with Matzke’s findings.

Having the monitory example of the philosophical controversy over Ruse’s testimony in McLean before him, Pennock doubtless realized that his testimony would be criticized as well. Here he articulates the “simple ballpark approach” he took in his testimony, arguing that, for methodological reasons inherent in the nature of empirical evidence, science is not capable of appealing to the supernatural in its explanations of phenomena in the natural world, and defending his approach against a number of his philosophical colleagues. He concludes, “[T]he rational conclusion here is that creationism does not even belong in the stadium, that it is playing a different game entirely — Sudoku, perhaps.” (Should that be Pseudoku?) Among the colleagues he responds to is Fuller, who defended his Kitzmiller testimony in his Science v. Religion? (2007; reviewed by Norman Levitt in Skeptic 14:1) as well as in “A Step toward the Legalization of Science Studies,” reprinted here. Fuller’s essay teems with errors that often suspiciously verge on the tendentious. For example, he describes the expert witnesses for the plaintiffs in Kitzmiller as “seasoned veterans of related trials involving creationism,” for example, presumably so as to portray himself as a waiflike innocent in comparison. In fact, only one of the six, Kenneth R. Miller, had ever testified in such a trial before. It is perhaps a minor weakness of the book that Fuller is the only critic of Pennock’s testimony represented, but philosophers are bound to be discussing the case for years to come.

For more books and video resources on evolution and creationism:

SEE our selection of books
on these topics

SEE our selection of lectures
on these topics

But Is It Science? is evidently intended as a sourcebook for university classes in philosophy, the history of science, science and religion, and so forth, and as such it succeeds admirably. But it is, or ought to be, appealing to the general public at large. The creationism/evolution controversy is a perennial feature of life in the United States, with attempts to remove, balance, or compromise the teaching of evolution recurring from the Scopes era to the present day. Even if public interest in intelligent design dwindles after Kitzmiller, as public interest in creation science dwindled after McLean and Edwards, the profound yet misguided discomfort with evolution that actuates such assaults on evolution is bound to remain. Also bound to remain are philosophical controversies over creationism, which — as the Kitzmiller case illustrated so vividly — have the potential to affect the quality of science education across the country and indeed around the world. Pennock and Ruse conclude their preface by writing, “We hope that you enjoy this collection and learn from it.” I think that you will. And they add, “We hope sincerely that in twenty years it will not be necessary to bring out a third edition.” I do, too. But if so, it will be due, despite Mencken’s jab, in large part to the philosophers — Pennock, Ruse, and Forrest, to be sure, but also Philip Kitcher, Sahotra Sarkar, Elliott Sober, and a host of their colleagues — who have worked tirelessly to expose the philosophical flaws of creationism.

NEW ON SKEPTICBLOG.ORG
The Natural and the Supernatural

Michael compares science and religion to the natural and the supernatural.
• READ the blog post •