Many skeptics hold a special fondness for monster mysteries. Cryptid tales are cool, often solvable, and mostly harmless. Mythical monsters are even relatively plausible. (After all, for Bigfoot to be true, you don’t have to overturn the laws of physics. You just have to find Bigfoot.) You can even discuss topics at the new MonsterTalk section of the Skeptic Forum.

Representing the best of the tradition of both on-site skeptical investigation and archival sleuthing, these three take us on the trail of things that stomp, roar, and go bump in the night…

Cryptozoological creatures like Bigfoot, the Loch Ness Monster and the Chupacabra have fascinated and inspired monster hunters for generations, providing endless reports of sightings, unverified film footage and blurry photographs to feed the public imagination.

Thankfully, this kind of speculation and storytelling has also given rise to a new generation of skeptical investigators who use the tools of science to dig into monster claims. This week on Skepticality, Derek & Swoopy talk with Benjamin Radford, Dr. Karen Stollznow, and Blake Smith — the team from the podcast MonsterTalk.

Darwin vs. the Wolfman

In this week’s Halloween episode, MonsterTalk ventures into the realm of the werewolves — and asks what Charles Darwin’s Origin of Species implies for this fearsome monster’s plausibility. Guest Dr. Brian Regal (Assistant Professor for the History of Science at Kean University) discusses his lecture about whether Darwin slew the last of the werewolves.

Professor Regal also explores the relationship between creationists and cryptozoology, and introduces his new book, Pseudoscience: A Critical Encyclopedia.

In this week’s eSkeptic, we present an article from an early Halloween issue of Junior Skeptic describing how to make your very own alien autopsy cake. 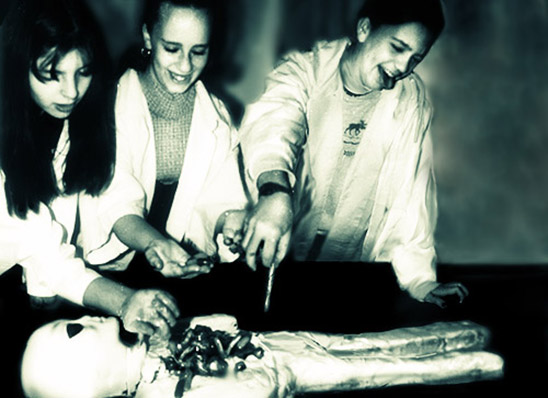 Do it Yourself
ALIEN AUTOPSY

by Emily and Linda Rosa

Have fun and make your very own alien autopsy cake! It’s great for a Halloween party or your birthday. My friends and I had a wild time dissecting my chocolate alien cake made with a glass alien head (sold in novelty stores as piggy bank), a big batch of green frosting and miscellaneous edible guts. Our alien cake was every bit as real as the famous alien dissected on the Fox Network in 1995.

When my guests arrived, I gave them lab coats to wear (which looked suspiciously like long white shirts) so we all looked like scientists. then I led them into the “dissection room” where the body lay on what looked suspiciously like a dining room table. You can set the mood by getting everyone to make a cursory external examination of your alien — note the small ears, the imperforate mouth, the fragile, fluffy dermal layer, the lack of genitalia, no evidence of decomposition, etc.

At first my friends were squeamish about cutting into the alien, but they soon got over it. Bethan plunged her knife through the frosting and into the chest which heaved as if alive as a result of the bag of guts (cherry pie filling and gummy worms) sliding around under the cake. It was pretty creepy. Bethan squealed and immediately pulled out the knife — which was dripping red — so she screamed again. But before long, my friend Erin was bold enough to plunge her hands into the alien and grab fistfuls of its (or her or his) guts.

This alien tasted really good, too. My savage friends licked the guts off of their hands. Your alien cake will disappear fast, almost as fast as other extraterrestrials sighted on Earth. I hope you have as much fun as we did. Be sure to take some out-of-focus photos of the fun, just like the real alien autopsy hoax film. I would love to hear your stories about your experience if you make an alien cake. 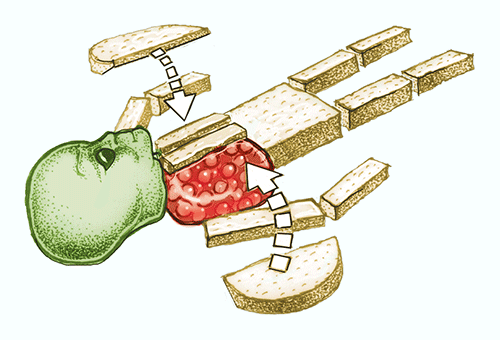 The recipe — assembling the alien cake 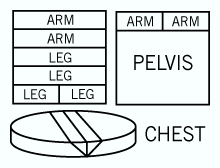 Body
This alien takes three pans of cake: two 9” x 9” square pans and one 9” diameter round pan. We recommend chocolate cake to go with the cherries.
Limbs
Take one of the square cakes and cut it into five strips. Cut one strip the same size off the other square cake, as well. These are your arms and legs. Arrange as you like.
Pelvis
The remaining cake makes up the hips.
Chest
Cut the circular cake in half and place the pieces over the bag of guts. You might need to sculpt the cake a bit.
Viscera
Remember the phony alien autopsy film they showed on TV? None of the guts were connected. That doesn’t make sense, but it’s easier to do. For our guts, we dumped a big can of cherry pie filling and a handful of gummy worms (and anything else edible that you want) in a clear, thin plastic bag. Knot the bag tightly and cut off any extra plastic.

Head
We had an alien head (actually a piggy bank) around the house that cost $10. We made a support for it from cardboard, covered with aluminum foil. If you don’t have an alien head you could use a green balloon. Draw a pair of big slanted eyes on the balloon with a black marker. Or make another round cake layer and cut an alien head shape out of it as shown.
Dermal Layer
Frost cake all over with green icing to match the color of the head.
Autopsy Table
Prepare the alien on a big sheet of cardboard covered with heavy duty aluminum foil to protect your table.

With great sadness, Michael Shermer reports the death of Norman Jay Levitt: one of the finest writers ever to grace the pages of Skeptic magazine. • READ the blog post • 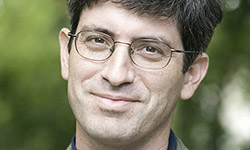 The Tangled Bank
An Introduction to Evolution

Zimmer, an award-winning science writer (New York Times, Discover), takes readers on a fascinating journey into the latest discoveries about evolution. In the Canadian Arctic, paleontologists unearth fossils documenting the move of our ancestors from sea to land. In the outback of Australia, a zoologist tracks some of the world’s deadliest snakes to decipher the 100-million-year evolution of venom molecules. In Africa, geneticists are gathering DNA to probe the origin of our species. In clear, non-technical language, Zimmer explains the central concepts essential for understanding new advances in evolution, including natural selection, genetic drift, and sexual selection. He demonstrates how vital evolution is to all branches of modern biology — from the fight against deadly antibiotic-resistant bacteria to the analysis of the human genome.