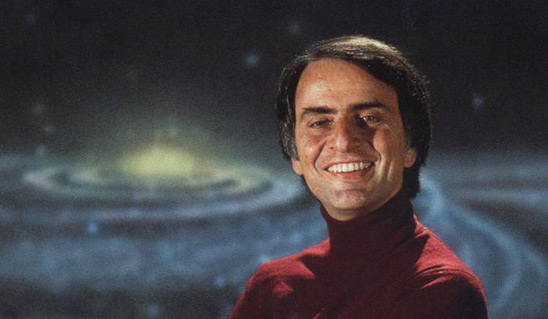 Carl Sagan on the cover of Carl Sagan: A Life.

In this era of celebrity — once defined by Daniel Boorstin as someone who is famous for being famous, well-known for their well-knownness — it’s good to remember that yet another thing that makes science stand out above all other social traditions and cultural products is that our celebrities have to actually earn their celebrity status. You cannot simply be well-known for your well-knownness in science; you actually have to do something. And there are few celebrities in science who have done more for the promotion of science, reason, rationality, and critical thinking than Carl Sagan, whom we remember this week upon the impending occasion of his birthday on November 9. Carl would have been 75 years old. Happy Birthday Carl!

In celebration, we would like to share with you a free lecture from our Distinguished Lecture Series at Caltech, a free song from our 2009 Skeptics Mix Tape, and a compendium of tribute articles that you can read for free on skeptic.com from several back issues of Skeptic magazine: vol. 4 no. 4, vol. 7 no. 4, vol. 13 no. 1.

In this Skeptics Distinguished Lecture Series talk at Caltech from 1999, three science biographers take an illuminating look back over the life and legacy of one of the 20th Century’s most celebrated astronomers.

First, Michael Shermer analyzes Carl Sagan’s career to test common claims (such as the idea that Sagan’s popularizing interfered with his scientific research). Shermer reveals the true nature of the so-called “Sagan Effect.”

Then, William Poundstone (author of Carl Sagan: A Life in the Cosmos) provides an entertaining look at Sagan’s lesser known interests — especially his marijuana use (and the media fascination with that revelation).

Keay Davidson (author of Carl Sagan: A Life) rounds out the event with a discussion of Sagan’s ideas about exobiology and nuclear proliferation.

FREE ARTICLES: from Skeptic back issues

Click any of the titles below to read the full article.

Star Stuff
by Tom McDonough
As an undergraduate in the 1960s, Tom McDonough eagerly read the scientific papers of an obscure young astrophysicist named Carl Sagan — one of the few researchers investigating the possibilities of life on other worlds. McDonough shares some of his personal reminiscences of Carl Sagan.
Carl Leaves Us
by James Randi
James Randi’s heroes are few. Among that short list of heroes is Carl Sagan. Randi recounts how Carl Sagan, in all respects, supported science and the simple process of thinking.
An Awful Hole. A Wonderful Life.
by Michael Shermer
December 20, 1996 was a gloomy day at the Skeptics Society. In light of the death of one of the finest human beings of our age, Michael Shermer pays tribute to the late Carl Sagan.
In Sagan’s Own Words
excerpts from Carl Sagan’s work
Culled from the expansive work of Carl Sagan, we present some of his own words on the cosmos, ETs, childhood, genes, brains, pseudoscience, science literacy, nonsense, uncertainty, biology, history and God.

Sagan & Skepticism
reviews by David Morrison
David Morrison reviews two books: Carl Sagan: A Life by Keay Davidson (1999, John Wiley and Sons) and Carl Sagan: A Life in the Cosmos by William Poundstone (1999, Henry Holt)
The Measure of a Life
by Michael Shermer
Michael Shermer ponders the question of what the measure of a life is once it has gone. And if that life was an epochal-shaping life, how is a contemporary biographer to put that life in perspective before the epoch is over?

Carl Sagan’s Vision
by Freeman Dyson
Carl Sagan saw a vision of human space-explorers venturing out into the universe, following the great tradition of the sailors who ventured out onto the oceans and began to explore the continents of this planet 500 years earlier. But Carl was not only a romantic visionary; he was also a professional scientist.
Carl Sagan & Edward Teller
by David Morrison
Carl Sagan and Edward Teller were bitter opponents in national security debates about issues such as “Star Wars” and nuclear test bans, but ironically they agreed on defending the Earth against asteroids — an agreement that neither, however, was ready to admit in public.
Carl Sagan & the Search for E.T.
by Tom McDonough
When Tom McDonough was a grad student at Cornell in the late 1960s, he ploughed through dry scientific journals. Occasionally, he found papers bordering on science fiction, hidden within them like naughty pictures. These gems were often by an obscure Harvard scientist named Carl Sagan. They spoke about the possibility of life on other worlds, a subject almost taboo in science at that time…
Leaving a Demon-Haunted World
by C. Pearson Solen
Solen discovered The Demon-Haunted World on the library shelf one day. He had heard of Sagan, of course, but knew little of him. At a time when Solen’s friends had left him, where he could not confide in his own family, the book’s dedication invited him toward the candle…
Popular & Pilloried
by Gregory Benford
Gregory Benford recounts how Carl Sagan, the best known astronomer in the world, was turned down by the National Academy of Sciences and laments that no other widely recognized scientist has replaced him in popular discourse.
The Sagan File
by Joel Achenbach
Joel Achenbach moved offices, and began to purge files, stuff he didn’t need and hadn’t looked at in years. Digging deep, he came across a fat file marked “Sagan.” The astronomer died in December 1996. Save? Throw away? From the documents, a voice emerged…
Our Place in the Universe
by Bill Nye “The Science Guy”
Carl Sagan was a scholar and a visionary. He changed the world. His work still does. As Bill Nye thinks back on the time he got to spend in Sagan’s classes, he realizes what made Sagan the best science communicator of his day.

A Celebration of Astronomy

presented by the Center for Inquiry, Ft. Lauderdale

To celebrate Carl Sagan’s legacy on the 75th anniversary of his birth (November 9, 1934), and to increase public involvement in the excitement of astronomy and space exploration, a local coalition of science and reason-based organizations have created the First Annual Carl Sagan Day. It is particularly fitting that we celebrate this great scientist in 2009, the International Year of Astronomy. We hope to have November 9th officially designated as Carl Sagan Day.

READ MORE about this FREE event

NEW ON SKEPTICBLOG.ORG
A Skeptical Triumph Over Medical Flim-Flam

Michael recounts how a California Court of Appeals vindicated Dr. Bruce Flamm, an OBGYN physician and professor at the University of California, Riverside, by throwing out a defamation lawsuit filed against him by a man who claimed to have proven that prayer can increase pregnancy rates in women trying to conceive.

The American Freedom Alliance is hosting a public debate featuring Stephen Meyer, Rick Sternberg, Michael Shermer and Don Prothero. Read more about the speakers and get your tickets online.