Imagine you’ve just completed your PhD in molecular biology and genetics. Would enrolling at NYU film school be your next logical career step? Unlikely as it may sound, that’s exactly what Alexis Gambis, creator of the Imagine Science Film Festival decided to do.

This week on Skepticality, Swoopy talks with Alexis about the surprising and yet natural collaboration between scientists who dedicate their lives to studying the world we live in, and filmmakers — who have the power to interpret and share this knowledge with a broader audience than ever before.

This week also includes the debut of a new segment: “This Week in Skeptic History,” hosted by notable skeptical activist Tim Farley (creator of the WhatsTheHarm.net).

Getting into the
Spirit of Things

Things get spooky this week on MonsterTalk, as the hosts venture into the science of ghosts.

What does neuroscience have to say about the possibility of consciousness or mind existing outside the body — or continuing on after the body has died? This episode’s guest is neurologist Dr. Steven Novella (veteran of on-site ghost investigations, and host of the Skeptics’ Guide to the Universe podcast), who shares his insights on brains, minds, and specters from beyond the grave.

In this week’s eSkeptic, David Naiditch looks at why Alaska’s High-Frequency Active Auroral Research Program (HAARP) is such an attractive target for conspiracy theorists.

David Naiditch received a B.A. in mathematics from the University of California, Los Angeles and an M.A. in philosophy from the University of California, Santa Barbara. He is a software engineer and has written two books on the Ada programming language. David enjoys teaching, writing science and philosophy articles, playing the guitar and harmonica, sculpting, painting, and studying architecture.

HAARP: The Ultimate Weapon of the Conspiracy (detail of book cover)

The High-Frequency Active Auroral Research Program (HAARP), located near Gakona, Alaska, began in 1990. It consists of a high-power transmitter used to temporarily excite a limited area of the ionosphere, and a sophisticated suite of instruments used to observe the physical processes that occur in the excited region. When complete, 180 72-foot antennas will be distributed over about 33 acres, with a total transmitter power of about 3,600 kilowatts.

HAARP has become a favorite target for conspiracy theorists and doomsayers. They have blamed HAARP for triggering catastrophes of biblical proportions, such as massive floods, devastating droughts, powerful hurricanes, tornadoes and thunderstorms, and devastating earthquakes in Afghanistan and the Philippines aimed to “shake up” Muslim terrorists.

HAARP has also been blamed for major power outages in the western United States, the downing of TWA flight 800, and mysterious diseases such as the Gulf War Syndrome and Chronic Fatigue Syndrome. Some claim HAARP is a mind control device that spurred the shootings at Columbine High School and elsewhere. (Devices are even being sold to block HAARP’s mind-altering emissions.) HAARP has also been described as an impenetrable missile defense shield, a death ray capable of rendering the Earth uninhabitable, a machine that can interfere with the migratory paths of wild animals, a diabolical tool wielded by the forces of the Antichrist, a worldwide communications jammer, an apparatus that can cause the Earth to spin out of control, and a system linked to UFO activity.

Why is HAARP such an attractive target for conspiracy theorists? HAARP is a gigantic, high-energy, Pentagon-funded gizmo located in the remote Alaskan wilderness that plays around with the Earth’s ionosphere, but whose purpose seems deeply mysterious to the scientifically uninformed. HAARP also involves physics resembling the alleged revolutionary work of a poster child of conspiracy theorists, Nikola Tesla, and is allegedly linked to physicist Dr. Bernard J. Eastlund’s weird patent (#4,686,605) involving the use of Tesla technology for altering the Earth’s energy fields. 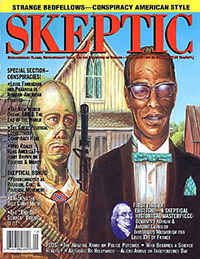 Includes: The Great Political Correctness Conspiracy Hoax; We the People? On Money, Politics, and Who Really Runs America; Louis Farrakhan and the Paranoid Style in African-American Politics; The End of the World & the New World Order: Black Helicopters, Hong Kong Gurkhas, Global Conspiracies, and The Mark of the Beast, and more…
ORDER the issue

The two main HAARP conspiracy and doomsday books are, Angels Don’t Play this HAARP: Advances in Tesla Technology by Dr. Nick Begich and Jeane Manning, and HAARP: The Ultimate Weapon of the Conspiracy by Jerry E. Smith, the former Executive Director of the National UFO Museum. In addition, numerous websites can be easily located that describe all the alleged dire effects of HAARP.

Perhaps the best defense of HAARP is posted on the official HAARP website, especially on the page entitled “Some Frequently Asked Questions about HAARP”. The site provides detailed descriptions of HAARP, its purpose, and its impact on the environment. According to this website, HAARP is a research facility whose goal is to “further advance our knowledge of the physical and electrical properties of the Earth’s ionosphere which can affect our military and civilian communication and navigation systems.” The ionosphere extends from 35 to 500 miles above the Earth’s surface. It contains charged particles, called ions, and electrons that can destroy, reflect, and absorb radio signals. The behavior of these particles impacts communications, navigation, surveillance, and remote sensing systems. By better understanding Earth’s ionosphere, the reliability and performance of these systems can be improved.

Is HAARP a secret project?

Although many conspiracy theorists claim that HAARP is a top secret project, the official HAARP website states, “The HAARP program is completely unclassified. There are no classified documents pertaining to HAARP.” Indeed, why would a secret project provide so much public information on a website? Furthermore, HAARP is staffed by researchers from many different industries, and many universities, including UCLA, MIT, the University of Alaska, Stanford University, the University of Massachusetts, Clemson University, Penn State University, Dartmouth University, the University of Tulsa, the University of Maryland, and Cornell University. Such publicized wide participation is hardly a sign of a clandestine project. In addition, photographs of the HAARP facility are readily available and show no barriers or security fences, guards, surveillance equipment, or other indications of a secret operation. There are even occasional public tours of the facility.

Can HAARP be used for military purposes?

Although the Air Force and Navy jointly manage HAARP, officials claim HAARP is not designed for military purposes, but is a research facility whose specifications were developed by a consortium of (previously mentioned) universities.

The HAARP website does say that interest in ionospheric research includes “the unexplored potential of technological innovations which suggest applications such as detecting underground objects, communicating to great depths in the sea or earth…” This statement has led to reasonable speculation that HAARP-like technology is or may be used to communicate with deeply submerged submarines or to detect hidden underground military installations. 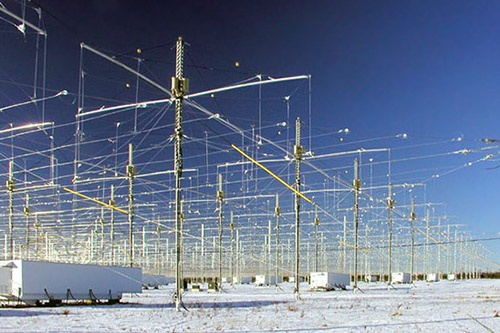 Are HAARP’s emissions a health risk?

According to the HAARP website, “HAARP complies completely with all existing safety standards for electromagnetic radiation at all locations on or off the site,” and an “Environmental Impact Study was conducted during 1992–93 in accordance with the National Environmental Policy Act (NEPA).” Furthermore, HAARP’s emissions, even at the closest public access to the site, are claimed to be lower than emissions existing in many urban environments.

The HAARP website also addresses the concern that HAARP emits extremely low frequency (ELF) radiation that could produce health problems and affect our mental functions. While HAARP does not transmit signals in the ELF range, it is possible to generate a small but useful ELF signal through ionospheric heating. According to HAARP officials, this ELF signal “will be more than eleven million times weaker (smaller) than the Earth’s background field and about one million times weaker (smaller) than the level where researchers have reported biological effects in the literature.” The field is so weak that it may only be detected with sophisticated instruments.

Could HAARP impact the weather?

According to the HAARP website, “The HAARP facility will not affect the weather. Transmitted energy in the frequency ranges that will be used by HAARP is subject to negligible absorption in either the troposphere or the stratosphere — the two levels of the atmosphere that produce the earth’s weather.” HAARP’s transmissions do interact with the near-vacuum region of the ionosphere. However, the “downward coupling from the ionosphere to the stratosphere/troposphere is extremely weak, and no association between natural ionospheric variability and surface weather and climate has been found, even at the extraordinarily high levels of ionospheric turbulence that the Sun can produce during a geomagnetic storm. If the ionospheric storms caused by the Sun itself don’t affect the surface weather, there is no chance that HAARP can do so either.”

How long do the effects of ionospheric heating last?

The HAARP website says, “Since the ionosphere is, inherently, a turbulent medium that is being both ‘stirred up’ and renewed by the sun, artificially induced effects are quickly obliterated. Depending on the height within the ionosphere where the effect is originally produced, these effects are no longer detectable after times ranging from less than a second to 10 minutes.” Once again, local changes to the ionosphere resulting from HAARP are many orders of magnitude less than those global changes caused by variations in the Sun’s energy output. According to the HAARP Environmental Impact Statement, there are no significant impacts to the ionosphere, and therefore, no mitigation measures are required. 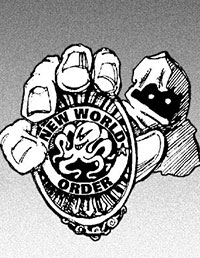 50 Conspiracies and Why People Believe Them

In this lecture, John Whalen (an investigative journalist and author of the bestselling book, 50 Greatest Conspiracies) guides you through the dizzy labyrinths of conspiracy theories, where fact and fiction flirt, court, marry, and bear very strange offspring: CIA, Watergate, JFK, UFOs, KKK, AIDS, LSD, FEMA…. Whalen also discusses why people believe in conspiracy theories, and the psychology of what conspiracy theories offer in terms of explaining how the world works.
ORDER the lecture on CD

Can HAARP create a hole in the ionosphere?

According to the HAARP website, “No. Any effects produced by HAARP are minuscule compared with the natural day-night variations that occur in the ionosphere. Several ionospheric layers completely disappear naturally over a whole hemisphere during the evening hours. HAARP can’t come close to producing this effect, even in the limited region directly over the site.”

What effect will HAARP have on the Earth’s magnetic field?

NEW ON SKEPTICBLOG.ORG
“The Standard Pablum” — Science and Atheism

In Daniel Loxton’s recently-released evolution book for kids, a couple paragraphs on the question of religion have sparked some important discussion in the atheist blogosphere. In this week’s Skepticblog, Loxton addresses his position on the relationship between skepticism and atheism.