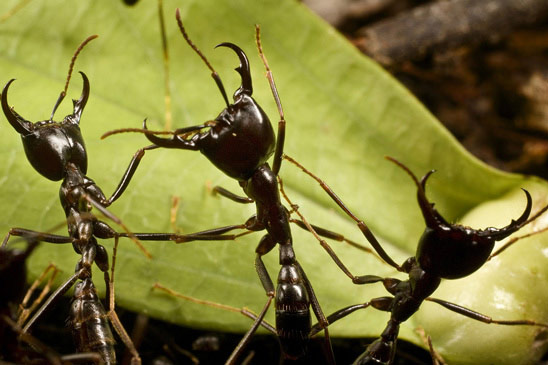 Soldiers of an African army ant that can have colonies of 20,000,000 workers capable of killing cattle (photo copyright © Mark W. Moffett, used with permission)

OUR NEXT LECTURER: biologist Mark Moffett

Adventures Among Ants:
A Global Safari with a Cast of Trillions

INTREPID INTERNATIONAL EXPLORER, biologist, and National Geographic photographer Mark W. Moffett, “the Indiana Jones of entomology,” takes us around the globe on a strange and colorful journey in search of the hidden world of ants. Moffett’s spectacular close-up photographs shrink us down to size, so that we can observe ants in familiar roles; warriors, builders, big-game hunters, and slave owners. We find them creating marketplaces and assembly lines and dealing with issues we think of as uniquely human — including hygiene, recycling, and warfare.

Galileo found that Jupiter had four moons,
to supporters of Copernicus what good news!
He chose to disagree with the Catholic Church
well there may be a center — but it’s not Earth. 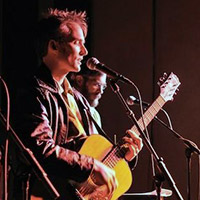 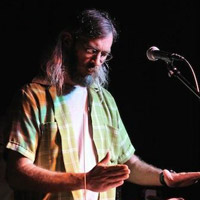 The Sound of Science

This week Skepticality welcomes two of the members of the Los Angeles-based band “Artichoke”: Timothy Sellers (who pursued physics before deciding on music) and Steve Collins (an engineer at NASA’s Jet Propulsion Laboratory).

Artichoke is known to many eSkeptic readers for the song “Mary Anning,” their highly popular contribution to the “Skeptics Mix Tape 2009” project. (As Mix Tape curator Daniel Loxton explains, “Artichoke is really top tier science music. There are vanishingly few bands who can match their catchiness and scientific depth.”)

TWICE I HAVE SPOKEN at the TED (Technology, Entertainment, Design) conference. Twice I have begrudgingly agreed to the strictly enforced 18-minute talk format — grumbling that “ideas worth spreading” (the TED motto) could not possibly be conveyed in such a constrained format. And twice have I been proven wrong. With discipline and diligence you really can say something of substance in a tight space, and more than 200 million downloads of endlessly entertaining and educational videos prove the principle of pithiness.

In The Brain and the Meaning of Life, philosopher, psychologist, and computer scientist Paul Thagard (University of Waterloo) has elegantly employed the pithiness principle. He offers a tightly reasoned, often humorous, and original contribution to the emerging practice of applying science to areas heretofore the province of philosophers, theologians, ethicists, and politicians: What is reality and how can we know it? Are mind and brain one or two? What is the source of the sense of self? What is love? What is the difference between right and wrong, and how can we know it? What is the most legitimate form of government? What is the meaning of life, and how can we find happiness in it? Thagard employs the latest tools and findings of science in his attempts to answer these (and additional) questions. He briefly reviews how others have addressed them in the past. And he discusses how a scientific worldview can inform one’s analysis and in some cases fully answer the questions — at least to the satisfaction of those of us who take a strictly materialist and naturalist perspective.

Yes, there is a point of view here, and well there should be. When Henry Fawcett commented to Charles Darwin that some scientists found Darwin too theoretical and believed that he should just let the facts speak for themselves, Darwin responded: “How odd it is that anyone should not see that all observation must be for or against some view if it is to be of any service” (1). Thagard’s perspective is that of cognitive neuroscience. He wants to bore into the brain to add a layer of more objective analysis.

Take love, as Thagard does in a concise six pages. He notes that when you gaze upon the face of your lover, the ventral tegmental area and the nucleus accumbens — both rich in dopamine receptors and associated with extremely positive feelings similar to those in cocaine addiction — become quite active. He remarks how the hormone oxytocin increases feelings of attachment between people. These findings and numerous others that he mentions support his model of emotional consciousness, “emocon” (2). That conceptual model sketches how different areas of the brain “interact to produce emotions as the result of both cognitive appraisal and bodily perception.” In it, external stimuli (such as the sight of your loved one) are input through the senses (sight, smells, touch) to the thalamus, which in turn stimulates both brain states and bodily states (increased heart rate and blood pressure, rapid breathing and flushed skin, and so forth). A network of mutual interactions among the amygdala, the insula, and various parts of the prefrontal cortex integrates bodily perceptions and cognitive appraisal. Thus, the base emotions from the amygdala (lusty passion) are linked to the higher cognitive functions of the cerebral cortex (assessment of the relationship).

How does all this get coordinated into a single feeling that we call love? Our dualistic intuitions tell us that there must be a mind that knows what the brain is doing, or some brain module that coordinates all processes into a single self, or some sort of central processing homunculus that sits at a neural switchboard. Not so, says Thagard: “There is no central processor that coordinates all the results and yields a decision. Rather, the brain’s reaction to a scary face or other sensory stimulus comes about through the dynamic interaction of external sensory perception, internal sensory perception, cognitive appraisal, and positive and negative valuation.” But from where does the sense of a single entity arise? Reciprocal feedback systems: “Note that the connections between brain areas in the … model are reciprocal, based on neural evidence that there is extensive feedback between neural populations in each pair of regions.”

Whether or not reciprocal feedback systems can properly account for such subjective qualia states as love (or for the “self ”) is highly debatable. Still, Thagard is to be commended for proposing a testable hypothesis and providing evidence in support of it that can be easily accessed by both scientists and general readers. On the subjective feeling of happiness, for example, he cites data gathered by social psychologist Sonja Lyubomirsky on what makes people happy (3). Many things do, among them: expressing gratitude, cultivating optimism, avoiding overthinking and social comparison, practicing acts of kindness, nurturing social relationships, developing strategies for coping, learning to forgive, increasing flow experiences (in which one is absorbed in an activity), savoring life’s joys, committing to your goals, practicing religion and spirituality, and taking care of your body through physical activity. Thagard is mildly dismissive of religion and spirituality, but he need not be — just broaden the category to include any activity that generates a sense of awe and transcendence. (For me, that comes from visiting astronomical observatories, fossil quarries, or geological formations, all of which lead to the contemplation of deep time and the humbling sense of insignificance before the vastness of the cosmos.)

Toward the end of The Brain and the Meaning of Life, Thagard dares to employ an objective standard to answer the question “What kind of government should countries have?” Because he gives the topic less than three full pages, political scientists will certainly feel that their field has been shortchanged. And while I agree with his conclusion that the current form of government most likely to satisfy human needs is “a liberal democracy operating in a capitalist economic system,” I take issue with his subsequent qualification, “with substantial state support for education, health care, and other egalitarian social requirements.” Nonetheless, I applaud Thagard’s approach of bringing to bear on the question two data sets: the United Nations Human Development Index (which rates 177 countries on how well they provide their citizens with “a long and healthy life, education, and a decent standard of living”) and yearly surveys, since 1981, of subjective well-being (happiness). Iceland, Canada, Ireland, the Netherlands, and Switzerland appeared near the top in both lists. It is true that two data sets do not a political science make, but Thagard’s concluding remarks in this section are a model of scientific caution and skepticism: “We should also not rule out the possibility that some form of government not currently practiced might actually be better for meeting vital human needs than those now in operation. Perhaps future social experiments will find creative new ways of governing states that will be more effective than those now observed.” Although we cannot implement such experiments in the name of science, if they do happen, scientists should be the first in to record the results.

Mlodinow, coauthor with Stephen Hawking of A Briefer History of Time, takes us on a walk through the hills and valleys of randomness and how it directs our lives more than we realize.

Some central questions in the natural and social sciences can’t be answered by controlled laboratory experiments, often considered to be the hallmark of the scientific method. This impossibility holds for any science concerned with the past. In this lecture Diamond presents eight comparative studies drawn from history, archaeology, economics, geography, and political science. 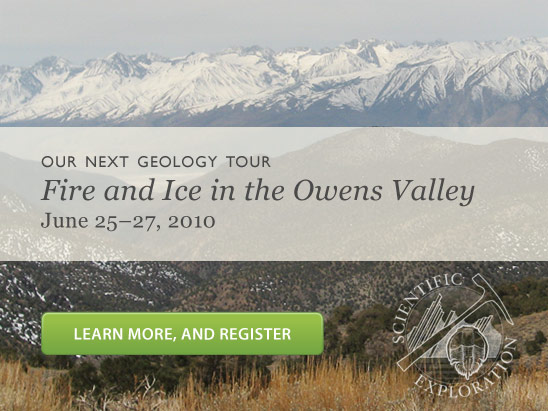 In this week’s Skepticblog post, Daniel Loxton shares his enthusiasm for the recent announcement that both the Skeptics Society, as well as the Committee for Skeptical Inquiry (formerly CSICOP), will officially be co-sponsors of The Amaz!ng Meeting 8, providing both financial and promotional support to the JREF for the event.