This week on Skepticality, Derek & Swoopy join forces with other members of “Team Skeptic” for an informal roundtable discussion about The Amazing Meeting 8, the record-setting skeptic’s conference that recently took place in Las Vegas (co-sponsored by the James Randi Educational Foundation, the Committee for Skeptical Inquiry, and the Skeptics Society).

Joining the discussion are Daniel Loxton (Editor of Junior Skeptic), Blake Smith (creator of the podcast MonsterTalk) and Tim Farley (creator of WhatsTheHarm.Net and producer of “This Week in Skeptic History”).

The panel discusses the highlights of this conference, including the best of the presentations and workshops, and reflects on the evolution of TAM over the past several years. Especially in the spotlight: challenging TAM8 presentations about responsibility for those at all levels of the skeptical movement. 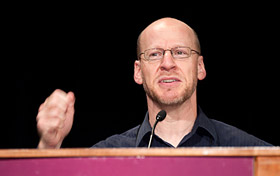 NEW ON SKEPTICBLOG.ORG
The Reasonableness
of Weird Things

We’ve all believed in something weird at one time or another. In this week’s Skepticblog, Daniel Loxton reminds skeptics that critical thinking is a learned skill; we are not born with it.

Dr. S. James Killings has a doctorate in Medieval History from the University of Toronto’s Centre for Mediaeval Studies. He has taught Classics at the University of St. Thomas in St. Paul, Minnesota and North Central College in Illinois. His current work is on the 11th-century monastic poet Reginald of Canterbury for which he recently published an article in Revue Benedictine. 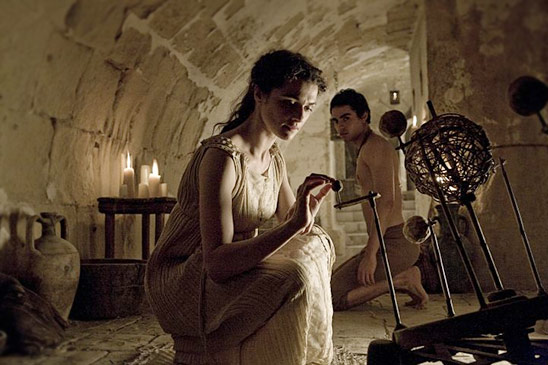 Was Hypatia of Alexandria a Scientist?

THE FILM AGORA, RELEASED IN THEATRES IN LATE 2009 in Spain and this summer in the United States, portrays an unlikely heroine for the popular American audience — the ancient mathematician Hypatia of Alexandria, played by Rachel Weisz. Although renowned as a Neo-Platonic philosopher during her lifetime, she is remembered more often for her death than for her life. In 415 AD the pagan Hypatia was caught up in the political and religious violence that routinely swept Alexandria and murdered by a group of fanatical Christian monks who were intent on making an example of her. One of her colleagues, the Syrian Damascius, placed the blame squarely on the Patriarch Cyril of Alexandria and his Christian followers.

In the 18th century, the Enlightenment thinkers John Toland and particularly Voltaire seized on Damascius’ story of Hypatia’s death as symbolic of the antagonistic nature the Christian religion had toward the freedom of inquiry. They imagined her as a martyred symbol of free thought who was destroyed by the irrational dogmas of the growing ecclesiastical patriarchy. Her death, according to her blossoming legend, set back free inquiry a thousand years and ended the scientific hopes of the Hellenistic Age. This image of Hypatia as an Enlightenment symbol was to have far-reaching influence well into the 20th century, as Maria Dzielska explains in her book, Hypatia of Alexandria, so much so that it has become difficult now to untangle the historical Hypatia from her literary legend. Amenábar’s Hypatia, also apparently influenced by Carl Sagan’s portrayal of her in his documentary film Cosmos, appears to be another cultural product of this Enlightenment legend.

The intersections of religion and science and rising concerns over religious fundamentalism have gripped the news in recent years, so it is no wonder Amenábar has resurrected Voltaire’s Enlightenment emblem again. But Hypatia’s portrayal as scientific heroine in the movie deserves some scrutiny not the least to separate her legend from history for those who have not studied ancient philosophy, but also to give credit where credit is due for the advancement of scientific reasoning.

The historical life of Hypatia is shrouded in the mists of the past. She was the daughter of the mathematician Theon, who was known to have been associated with the Museion of Alexandria in the 4th century. What we know of her mathematical work (and much of her life) comes from a Byzantine history, the Suda, compiled five centuries after her death. She is thought to have written commentaries on the conics of Apollonius and the Arithmetica of Diophantus, along with an introduction to astronomical treatises, none of which have survived. It has been argued that she contributed a not insignificant part to her father’s editions of Euclid and Ptolemy, and perhaps all of her commentaries were collaborations with her father. She taught at the Neo-Platonic School in Alexandria, an institution separate from the Museion. As a teacher of Plato and Aristotle, according to the Suda, she became famous throughout Alexandria. She has often been associated with the invention of the hydrometer, a tool used to measure the density of liquids, but the wording of the evidence — Synesius of Cyrene’s letter to her — casts doubt on that score.

Although we cannot be completely certain of the nature of Hypatia’s mathematical work, the commentaries and work attributed to her in the Suda do suggest that she was interested in astronomy. Apollonius described the eccentric movements of the planets, their epicycles and deferents and described the mathematical properties of the ellipse, hyperbola and parabola. Ptolemy builds on Apollonius’ work to construct his geocentric model of the planets. Diophantus’ Arithmetica provides examples of quadratic equations that are necessary to determine the properties of curves. Because of her association with the Neo-Platonic school in the 4th century Near-East, her work may have had something to do with the Plotine criticism of astrology. Plotinus, the founder of the Neo-Platonic school, was highly skeptical of astrological divination, and so we would expect was Hypatia. 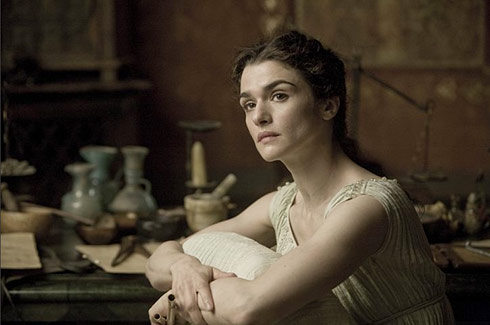 Confused by the irrational properties given by astrologers to this or that planet as it moved through the Zodiac, Plotinus asked: “What is the comprehensive principle of coordination [of the movements of the planets]? Establish this and we have a reasonable basis for divination.…” Plotinus believed the planets were living beings that paradoxically had no will but were bound to follow a set course through the heavens. In her studies of conics and curves, Hypatia may have thought to determine the “comprehensive principle of coordination” of these heavenly beings in order to make divination more rational. We may never know. But of the Neo-Platonists of her era — Porphyry, Iamblichus, Proclus, Damascius — Hypatia appears to have been unique in her focus on astronomy and this may have contributed to her popularity (and animosity toward her) in the superstitious culture of Egyptian Alexandria.

The scientific subplot of the movie has Hypatia questioning the geocentric theory of the planets as espoused by Aristotle and then Ptolemy. Amenábar’s Hypatia engages in physics and mathematics in her pursuit. Her empirical experiment with the falling grain sack aboard the ship proves that gravity has the same effect on falling objects whether moving forward or standing still. She excitedly concludes that the Earth could be moving forward in the heavens and we could be unaware of it (the logic of her conclusion is not explained in the film). This notion of a moving, non-stationary Earth, is in contravention to the Aristotelian idea of gravity which held that earth, as one of the four elements, was drawn to its natural place at the centre of the spherical universe, which also comprised the other three elements, water, air and lastly fire. Nonetheless, her experiment aboard the ship opens her up to questioning Ptolemy’s geocentric planetary model of celestial spheres and epicycles. Using her knowledge of Apollonian conics, mathematics, and a clinometer, she at length correctly deduces the elliptical orbits of the planets (Kepler’s first law of planetary motion) in a helio-centric (Copernican) system, a pair of discoveries that would have been 1200 years before their time.

The kind of reasoning that Amenábar’s Hypatia engages in, with the falling grain sack and the theoretical knowledge drawn from observation and experiment, is known as empiricism. It is a logical method so fundamental to our modern approach to science, especially astronomy, that it is difficult, if not impossible, for us to comprehend any useful scientific enterprise without it. But empiricism is the product of a long history of philosophers beginning principally with Avicenna in the 11th century and practiced by the likes of Tycho Brahe and Johannes Kepler in the cause of astronomy in the 16th century. It was developed into a philosophical practice through the Enlightenment principally by John Locke and David Hume. This mode of thought would have been completely alien to the real Hypatia of Alexandria, not because her mind was not equipped for such paths, but because she, her colleagues, her father, and their predecessors had no experience in nor knowledge of such logical methods. Moreover, as a 4th century Platonist, Hypatia likely mistrusted physical observation altogether and believed, like her mentor Plotinus, that she could uncover the mysteries of the universe by ratiocination alone.

The story of her menstrual rags in the Suda was meant to illustrate this point: as a female philosopher, Hypatia was not interested in the physical, only the metaphysical. To employ empiricism to call into question Aristotle she would have had to first call into question her entire metaphysical philosophical tradition and invent almost ex nihilo a whole new and mature method of reasoning. In other words, the real Hypatia would have been more likely to attribute the physical properties of the falling grain sack to the god Seraphis, than to the possibility that it meant the Earth was moving in the heavens in contradiction to Aristotle. She simply had no body of evidence nor rational means to conclude otherwise. It would take another millennia and considerable advances in other scientific areas — especially in logic, argumentation, mathematics, instrumentation and observation — before thinkers could begin to accurately describe the motions of the planets and the workings of the heavens. 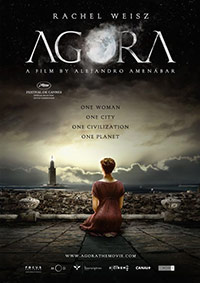 Without these logical methods and evidence, and as a Neo-Platonist, Hypatia’s astronomical study of conics and curves would have been a purely philosophical and mathematical pursuit, exercised in the cloistered confines of the Alexandrian Library, divorced from empirical observation. Nowadays, it is strange to contemplate astronomy without empiricism, but the Platonic philosopher Hypatia would have reveled in it. If we must give her a modern scientific title by which she can be recognized, it would be more accurate to describe her as a mathematician in the purest sense.

We ought not to diminish nor elevate Hypatia’s contribution to science. Making too much of her legend does great disservice to the multitude of men and women throughout history who have made modern science possible. If any great credit is due to the advancement of scientific reasoning and the birth of the Modern Age it is not to a rediscovered Hypatia, but to the many thinkers and philosophers of the Renaissance and Enlightenment who, after more than two millennia, first put into words and practice a revolution in our understanding of the universe. Amenábar has seemingly made Hypatia into a symbol of the modern scientific method. Voltaire would have approved.

The Collector’s Edition boxed set of 7 DVDs of the 13 hour series narrated in 1980 by Carl Sagan and revamped in 2000 with up-to-date science and images. The definitive tour of our universe. Inspiring!
ORDER the 7-DVD Set

This book presents Sagan’s prestigious Gifford Lectures on Natural Theology, in which he discusses his views on topics including: manic depression, the possibly chemical nature of transcendance, creationism, intelligent design, the likelihood of intelligent life on other planets, the likelihood of nuclear annihilation of our own, and a new concept of science as “informed worship.” Sagan’s humorous, wise, and at times stunningly prophetic observations on some of the greatest mysteries of the cosmos have the invigorating effect of stimulating the intellect, exciting the imagination, and reawakening us to the grandeur of life in the cosmos. ORDER the book