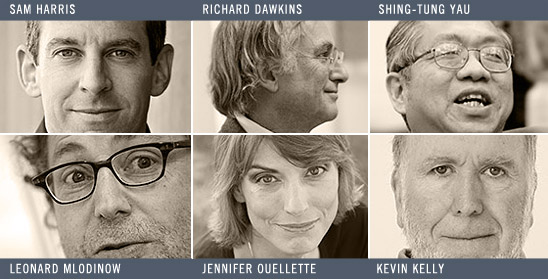 Announcing the New Season
of Lectures at Caltech

Mark your calendar! The Skeptics Society is pleased to announce its new season of the Skeptics Distinguished Lecture Series at Caltech. This continues the seventeen-year-long series, presenting over 230 lectures by some of the most distinguished experts in the world. Unless otherwise stated, all lectures take place in Baxter Lecture Hall, Caltech, Pasadena, CA. Book signings will follow all lectures.

Our first lecture of the season…

Merchants of Doubt: How a Handful of Scientists Obscured the Truth on Issues from Tobacco Smoke to Global Warming

ORESKES AND CONWAY tell an important story about the misuse of science to mislead the public on matters ranging from the risks of smoking to the reality of global warming. The people the authors accuse are themselves scientists — mostly physicists, former cold warriors who now serve a conservative agenda, and vested interests like the tobacco industry. And they name names, documenting their involvement in such issues as acid rain, the dangers of smoking and secondhand smoke, the ozone hole, global warming, the Strategic Defense Initiative, and the banning of DDT. These scientists aimed to sow seeds of public doubt on matters of settled science by casting aspersions on the science and the scientists who produce it. Oreskes, a professor of history and science studies at U.C. San Diego and science writer Conway also emphasize how journalists and Internet bloggers uncritically repeat these charges.

Tickets are first come first served at the door. Seating is limited. $8. for Skeptics Society members and the JPL/Caltech community, $10. for nonmembers. Your admission fee is a donation that pays for our lecture expenses.

$10 Skeptics Society members/Caltech/JPL community; $15 everyone else. Tickets may be purchased in advance beginning Sept. 13, 2010 through the Caltech ticket office at 626-395-4652 or at the door. Ordering tickets ahead of time is strongly recommended. The Caltech ticket office asks that you do not leave a message. Instead call between 12:00 and 5:00 Mon.–Fri.

In this week’s eSkeptic, Donna Harris reviews Consciousness Beyond Life: The Science of the Near-Death Experience, by Pim van Lommel. Donna Harris is a skeptic and the editor of the Manitoba Humanist newsletter.

Illustration below modified from ARSGRAFIK original.

Broadcasting from the Great Beyond

a book review by Donna Harris

What happens to us when we die? This has to be one of humanity’s greatest questions. After all, once you find out, there’s no way to let anyone else in on the answer.

Pim van Lommel is a cardiologist from the Netherlands. During his long career, he has resuscitated untold numbers of cardiac arrest survivors, and became intrigued by their stories of Near Death Experiences (NDEs). In addition to reviewing the available literature and past studies, in 2001 van Lommel’s interest drove him to lead his own larger study of cardiac arrest patients. While that study was published in the prestigious British medical journal Lancet, and van Pommel has published scientific papers and authored chapters in other medical works, this is his first book.

The book itself is readable and organized. We’re led deeper into the subject, as the author first establishes a historical foundation by recounting a description of the NDE phenomenon, then lays the groundwork for his theory, which essentially applies quantum physics to biological systems. The early chapters on the actual reported contents of NDEs are an entertaining primer through these experiences.

It’s easy to agree with his observation that NDEs occur when the brain is essentially stopped. If there is no blood flow, and no electrical activity, how can the cells in the brain continue to register visual and auditory input?

Van Lommel’s answer is that consciousness is not just located in the brain, but is a result of electro-magnetic fields that hold experiences and are non-local and possibly eternal. He asserts the analogy that much like a TV or radio station continues to broadcast even when we have no receiver to pick up the station, our consciousness continues to function after the death of the body and brain.

As the reader progresses through the book, there are questions not addressed that detract from the author’s message. The fact that all the research is far from gold-standard double-blind studies, but is instead based on self-reported surveys and interviews — in many cases years after the initial event — casts serious doubt on the accuracy of those memories.

Van Lommel also mentions an increase in “psychic” or intuitive abilities by NDErs, without even blinking a skeptical eye. Since any type of paranormal or intuitive power remains unproven, it is troubling that the author doesn’t question these abilities, and just includes them as accepted facts.

Van Lommel’s theories of the origins of consciousness are based on theories in quantum physics and the role of DNA. The lay reader can only assume that van Lommel is interpreting the theories correctly, since he himself is not a physicist or an evolutionary biologist, but a medical doctor. But they make for interesting, if not challenging, reading. Be prepared for your brain to hurt, and some readers may want to review these sections more than once. 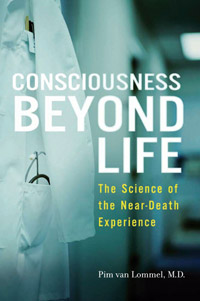 Another area that deserves further exploration involves the differences between survivors. In his own study, van Lommel reports that of 344 cardiac arrest survivors, 62 patients (18%) reported a Near Death Experience. However, that still leaves 82% (282 patients) who didn’t. And there were no striking differences between the two groups, such as duration of arrest, medication used, etc. If van Lommel’s theory is correct, what accounts for the different experiences? Why were the radio stations of the non-NDE patients not broadcasting?

Despite the fact that Van Lommel fails to convince skeptical readers that his ideas and theories are correct, the author remains sympathetic in that he doesn’t take an aggressive, “here’s my magic answer” approach. He clearly states that he is presenting a hypothesis and, as far as the lay reader can tell, it appears to be worthy of more exploration and consideration, even though some may argue the whole idea lacks plausibility.

Overall, the book is an interesting exploration of the phenomenon of the near death experience, and worth the read if you wish to think and be challenged. But in the end he did not convince this skeptic.

Skeptical perspectives on NDEs, consciousness and the paranormal

Altered States and the Quest for Immortality
(DVD $23.95) with Dr. Michael Shermer

A Skeptical Séance: Magic and the Paranormal
(DVD $23.95) with Mark Edward

Mentalist Mark Edward challenges skeptics to see beyond the doors of perception and participate in a special Halloween Séance. Are you skeptical? You won’t believe your eyes as Edward calls upon Houdini to fulfill his vow to return from the dark side. ORDER the lecture DVD

The Quest for Consciousness:
A Neurobiological Approach
(DVD $23.95) with Dr. Christof Koch

What are the biophysical and neurophysiological operations that give rise to specific conscious perceptions? How can the brain, a physical system, express subjective states such as emotions? How can neural activity give rise to sensations like pain? What is consciousness? Koch presents the best scientific answer to this question. ORDER the lecture DVD

Historical precedent, eyewitnesses, academic experts — these are among the tools that critical thinkers use to verify facts and give credibility to their arguments. And yet, misuse of these same principles provides the foundation for widely accepted conspiracy theories.

Why does the public often prefer wildly improbable half-truths to the demonstrable facts of history? This week on Skepticality, Swoopy talks with award-winning journalist and author David Aaronovitch about his book Voodoo Histories: The Role of Conspiracy Theory in Shaping Modern History. Deconstructing both well-known and obscure conspiracies, David illuminates how such far-fetched claims come to be believed. 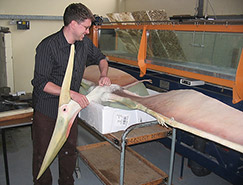 What is cryptozoology? Is it science? Is it folklore? Does it make predictions?

In part 1 of a 2-part series, MonsterTalk examines cryptozoology as a field, including speculation on the cryptids most likely to turn out to be real. Guest Dr. Darren Naish, paleontologist and science blogger, makes some surprising statements about the field, its role in science and culture, and the intersection of amateur and professional science. 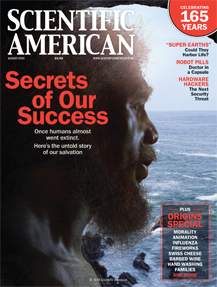 NEW ON MICHAELSHERMER.COM
Our Neandertal Brethren

Around 400,000 years ago a population of hominids migrated northward through the Middle East and into Europe and parts of western Asia. Between 80,000 and 50,000 years ago another population from the ancestral continent journeyed a similar route into the Eurasian landmass, and there the two populations met and mated. We are their descendants. Don’t miss this revealing article from Michael Shermer’s August Scientific American column.

NEW ON SKEPTICBLOG.ORG
The Value of Vertigo

Are we, as skeptics, really willing to consider the plausibility of weird claims? As a follow-up to last week’s Skepticblog post on The Reasonableness of Weird Things, Daniel Loxton underscores the importance of being able to put himself in someone else’s shoes in order to better understand why people believe weird things.