In this week’s eSkeptic, Dr. Donald. R Prothero reviews Darwin’s Universe: Evolution from A to Z by Richard Milner.

Dr. Donald R. Prothero is Professor of Geology at Occidental College in Los Angeles, and Lecturer in Geobiology at the California Institute of Technology in Pasadena. He earned M.A., M.Phil., and Ph.D. degrees in geological sciences from Columbia University in 1982, and a B.A. in geology and biology (highest honors, Phi Beta Kappa) from the University of California, Riverside. Continued reading bio at end of article… 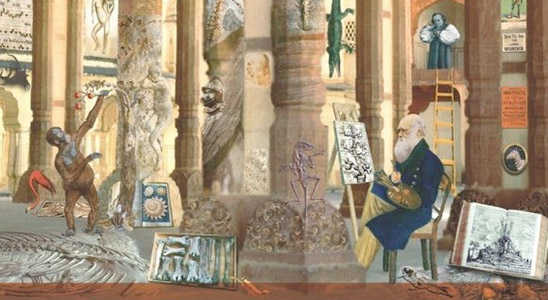 A Cornucopia of Darwinian Gems

In 1990, Richard Milner published The Encyclopedia of Evolution: Humanity’s Search for its Origins (Facts-on-File Publications, New York, 481 pp.) With a charming foreword by his childhood friend and classmate Stephen Jay Gould, the book was a smorgasbord of delightful anecdotes and stories about not only science and evolutionism, but also a startling array of other related topics as well. It was organized in an encyclopedia format, with separate topics arranged in alphabetical, rather than thematic order, so it was ideal for browsing. Its quirky but engaging approach was unique among all the books about evolution, most of which are more scholarly tomes that march through only serious topics in a natural, logical order. As such, it was sui generis, a book unlike any other, reflecting both Milner’s erudition and also his love of pop culture as well as science. In 1990, it was named by Choice “the best reference book of the year.”

Now, some 19 years later, Milner has revised and expanded his former book, with a new title and publisher. Many of the original articles are retained but updated. The original cover was a striking photo pastiche of an array of natural history objects, from fossils to snakes to a gorilla’s hand to a can of Chef Boyardee dinosaur macaroni. It has been replaced by a striking computer painting by Rosamond and Dennis Purcell of natural history objects and slogans decorating a colonnade of the historic Jaipur Palace (that Rosamond photographed in 1984 while visiting India with her friend Stephen Jay Gould). It was adapted from an illustration the Purcells created as a tribute to Gould in Natural History Magazine, except that Darwin appears in the foreground as the artist, painting Haeckel’s famous “tree of life”). In addition to Gould’s original preface (unchanged since Gould died in 2002), the new book has a foreword by American Museum anthropologist Ian Tattersall.

Milner’s professional training was in anthropology, and he served for many years as the senior editor of Natural History Magazine, the official popular publication of the American Museum of Natural History in New York. Milner is famous for his one-man show, “Charles Darwin: Live and In Concert,” which he has performed in many venues. For this show, Milner wrote all the songs and lyrics, and does quick costume changes to portray one character after another. (The lyrics to two of his songs have been printed at the end of the new book). Both the old and new books reflect Milner’s broad training in evolutionary biology, paleontology, anthropology, and history of science, as well as his fascination with the bizarre and trivial phenomena of pop culture that impinge on evolution and humanity’s place in nature.

Milner’s new book preserves much of the charm and scholarship of the original, but contains many new entries that bring the original book up-to-date. Many of the illustrations have been replaced or updated, often with equally quaint images from archival sources. The image quality in this edition is much better than the muddy reproductions of the first version. There are articles on the recent discoveries of Flores man, the “Toumai skull”, “Kennewick Man”, the “Iceman”, and all the other entries on fossil hominids are updated. The other new articles reflect the developments of the past two decades. These include such topics as: “Evo-Devo”, “Biological Exuberance: the kingdom of gay animals”, “Caveman”, the Kentucky Creation Museum, the “Darwin Fish”, “Darwinian Medicine”, “Richard Dawkins: Darwin’s Rottweiler”, “Feathered Dinosaurs”, “Intelligent Design: Creationism’s Trojan Horse”, “Flint Jack: Greatest faker of prehistoric tools,” the “Fox-Farm Experiments,” “Frankenfood”, “Genographics,” “Ghost species,” the “Hundredth Monkey Phenomenon, “ “Jurassic Park”, “Kary Mullis: Irrepressible Prince of PCR,” the “Naturalistic Fallacy,” the “Pillars of Pozzuoli”, “Coprolite Industry: How Dino Dung Saved England,” “Sulfur-based ecosystems,” and the moth whose existence Darwin predicted (Xanthopan morganii praedicta). The Scopes Trial and “Scopes II” (the 1981 Arkansas creation trial) both retain their long articles, but it would have been nice to see an article on the historic 2005 Dover, Pennsylvania, trial of “intelligent design” creationism as well.

Other entries about dated and largely forgotten ideas have been dropped, as have many of the more obscure biographical entries. These include Elaine Morgan’s “aquatic ape” theory, the “Biometrician-Mendelism controversy”, the “Cambrian-Silurian controversy,” the invalid primate taxon “Ramapithecus,” Robert Ardrey’s “African Genesis” hypothesis, the “clay theory” of the origin of life, the “Paintpot Problem”, “Sperm Competition,” the falsified “Turnover Pulse” hypothesis, the “Y-5 dental pattern,” the outdated “Dinosaur Heresies”, the antiquated “Dollo’s Principle”, Ronald Reagan and his bizarre ideas about evolution, or the discredited Alvarez theory and Nemesis Star theory of dinosaur extinction, as well as the faddish “Pleistocene Overkill hypothesis” of Ice Age extinctions. Reading through the list of both new entries and deleted topics is like a trip through memory lane for me, since over the past 40 years I have seen many of the ideas that were faddish when I was a student vanish from the scene, and so many other new ideas and discoveries take their place.

Naturally, a book covering such a wide range of topics and multiple fields of expertise cannot avoid a few mistakes. For example, the article on “Nebraska Man” (in both the old and new versions) claims that the fossil that formed the basis of Osborn’s mistaken hominid reconstruction was the tooth of a pig. Actually, it is a tooth of a peccary, a New World family (Tayassuidae) of pig-like mammals that is only distantly related to the exclusively Old World family Suidae, the pigs. This is the same mistake that creationists make when they crow over Osborn’s error, so it is unfortunate that Milner doesn’t know the zoological difference between them. In addition, some typos and misspellings persist, such as spelling “ontogeny” in different ways in the cross-referencing, but correctly in the full article. 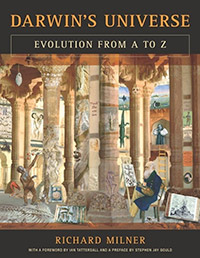 Milner has retained most of the quirky gems that made the original book such a surprise and joy to read. Some of these include the “evolution of cuteness”, P.T. Barnum’s fossil frauds, the “Flat-Earth Creationists,” the “Man in the Monkey House”, the “Clever Hans” phenomenon, the “Happy Family” of animals living together in peace, the “Iguanodon Dinner,” “Piltdown Man”, the “Sunday League,” “Tarzan,” “2001: A Space Odyssey,” and of course, “King Kong” and “Disney’s Fantasia.” As many of the reviewers on the book’s Amazon.com webpage commented, it is the perfect “coffee table book” — large and beautifully produced, and full of short articles which can be read whenever the fancy strikes. There is a little something here for everyone, from the scholar and scientist to the lay reader just interested in the connection between evolution and pop culture.

More importantly, the book seems to reach a readership that might never touch any other book on evolution, because it is so charming and entertaining as well as informative. It presents evolution in a non-threatening manner by luring the reader in with popular topics such as King Kong and Tarzan and “Jurassic Park”. Once the reader finishes these articles, they cannot help but browse further in the book, to find beautiful short summaries of serious scientific topics. Milner reports the facts and the failures of the creationist attacks on science without preaching. In this regard, this book is a valuable addition to the popular science bookshelf, since it reaches people sitting on the fence of evolution vs. creationism by entertaining and amusing them as it gently instructs them. In this regard, Milner achieves the same goal in popularizing science as did his late friend and classmate, Stephen Jay Gould.

Perhaps the best evidence of the book’s appeal is the reviews on its Amazon.com site. Not only do the lay readers all rave about how fun and accessible Milner’s book is, but it receives the ultimate accolade: a string of 10 perfect five-star reviews, with no dissenters or creationist critics. Such unanimous praise is unknown for books on controversial topics like evolution, and show that Milner has truly managed to reach an audience that most of us could never reach.

Prothero is Professor of Geology at Occidental College in Los Angeles, and Lecturer in Geobiology at the California Institute of Technology in Pasadena. He earned M.A., M.Phil., and Ph.D. degrees in geological sciences from Columbia University in 1982, and a B.A. in geology and biology (highest honors, Phi Beta Kappa) from the University of California, Riverside. He is currently the author, co-author, editor, or co-editor of 25 books and over 200 scientific papers, including five leading geology textbooks and three trade books as well as edited symposium volumes and other technical works. He is on the editorial board of Skeptic magazine, and in the past has served as an associate or technical editor for Geology, Paleobiology and Journal of Paleontology. He is a Fellow of the Geological Society of America, the Paleontological Society, and the Linnaean Society of London, and has also received fellowships from the Guggenheim Foundation and the National Science Foundation. He has served as the Vice President of the Pacific Section of SEPM (Society of Sedimentary Geology), and five years as the Program Chair for the Society of Vertebrate Paleontology. In 1991, he received the Schuchert Award of the Paleontological Society for the outstanding paleontologist under the age of 40. He has also been featured on several television documentaries, including episodes of Paleoworld (BBC), Prehistoric Monsters Revealed (History Channel), Entelodon and Hyaenodon (National Geographic Channel) and Walking with Prehistoric Beasts (BBC).

Skeptical perspectives on evolution from Prothero

One of the best books explaining evolution and new discoveries of the incredibly rich fossil record; plus a no holds barred critique of the claims of creationism and Intelligent Design. Over 200 illustrations.
READ more and order the hardback book

Prothero combines straightforward research with first-person narratives of discovery, injecting warmth and familiarity into a profession that desperately needs a more appealing approach to nonspecialists.
READ more and order the DVD…

In this brilliant synthesis of scientific data and theory, Occidental College geologist, paleontologist, and evolutionary theorist Dr. Donald Prothero will present the best evidence we have that evolution happened, why Darwin’s theory still matters, and what the real controversies are in evolutionary biology.
READ more and order the lecture DVD

NEW ON MICHAELSHERMER.COM
Was Jesus a Conservative or a Liberal?

The ancient art of cherry picking passages from the Bible to support this or that argument has found new life in recent decades as conservatives claim Jesus as their political ally and in the past year with the Tea Party movement invoking Christ’s conservativism. What Would Jesus Do? (WWJD?) has morphed into Who Would Jesus Vote For? (WWJVF?) Was Jesus a conservative? I don’t think so, but the entire enterprise of politicizing historical figures with modern labels is fraught with fallacy…