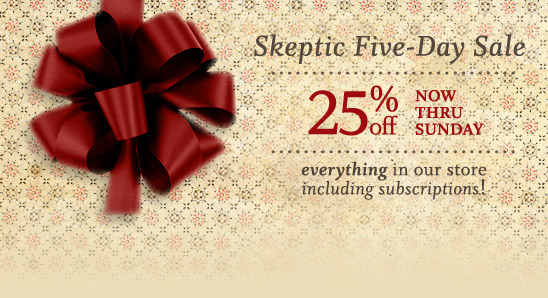 ON NOW THRU SUNDAY!

From now through Sunday, we are having our  best sale of the year.
For  5 days only, everyone will save  25% off everything in the store including: books, DVDs, CDs, subscriptions, swag, and back issues of Skeptic.

GIVING GIFTS ON DECEMBER 25, Sir Isaac Newton’s birthday, has long been a tradition amongst skeptics, so here are a few gems we’ve hand-selected from our catalogue that we think your friends and family will enjoy receiving. And remember, it’s okay to buy yourself a gift too!

NOTE: Sale prices shown below include the 25% discount mentioned in the ad above.
Sale prices are in effect until November 28, 2010 at midnight Pacific Standard Time. 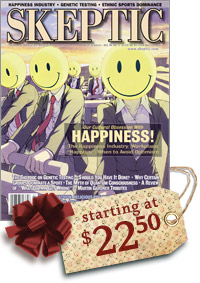 A subscription to Skeptic magazine, the definitive skeptical journal, makes a perfect gift that lasts all year. Promoting science and critical thinking, our articles explore and inform, and keep science at the forefront of public discourse.
ORDER a subscription
ORDER a gift subscription 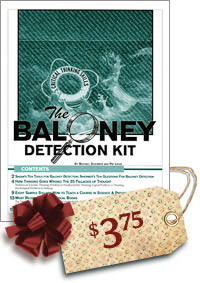 This 16-page booklet, designed to hone your critical thinking skills, includes suggestions on what questions to ask, what traps to avoid, specific examples of how the scientific method is used to test pseudoscience and paranormal claims, and a how-to guide for developing a class in critical thinking.
ORDER the booklet 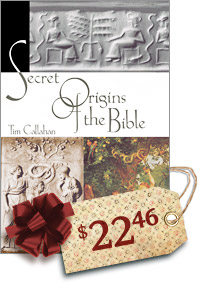 Secret Origins of the Bible
by Tim Callahan $29.95

Callahan uses ancient history, linguistics, archaeology, comparative mythology, and numismatics to reveal that all major stories in the Bible have historical antecedents that can be traced to very non-divinely produced works by other cultures. A must-read for anyone wishing to understand the Bible.
ORDER the hardcover
ORDER the lecture on DVD 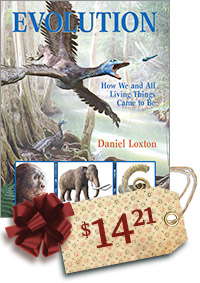 Evolution: How We and All Living Things Came to Be
by Daniel Loxton $18.95

This spectacularly illustrated introduction to the theory of evolution takes kids on a journey from Charles Darwin to modern-day science — along the way, answering common questions (and clearing up misunderstandings) that sometimes confuse people about the history of life on Earth. Recommended for children ages 8–13.
ORDER the hardcover 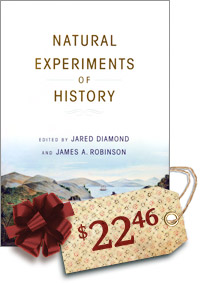 You can’t run a controlled scientific experiment to discover the economic consequences of military conquest or slavery. But you can use comparative statistics from closely related societies to discover surprising reasons for far-reaching historical outcomes. This book contains seven chapters written by various authors describing recent research that examines these kinds of historical “experiments.”
ORDER the hardcover
ORDER the lecture on DVD 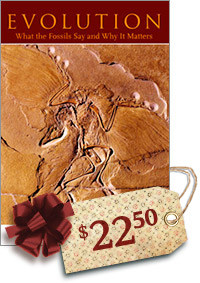 Evolution: What the Fossils Say and Why it Matters
by Donald Prothero $30

One of the best books explaining evolution and new discoveries of the incredibly rich fossil record; plus a no holds barred critique of the claims of creationism and Intelligent Design. Prothero’s visual presentation of the fossil and genetic evidence for evolution is so unmistakably powerful that we venture to say that no one could read this book and still deny the reality of evolution.
ORDER the hardcover 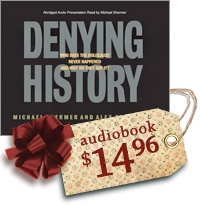 Denying History takes a bold and in-depth look at those who say the Holocaust never happened and explores the motivations behind such claims. Authors Shermer and Alex Grobman show how we can be certain that the Holocaust happened and, for that matter, how we can confirm any historical event.
ORDER the audiobook 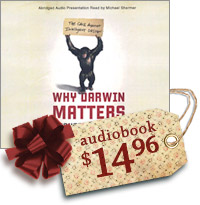 Dr. Shermer, once an evangelical Christian and a creationist, is now one of the best-known public intellectuals defending evolutionary theory. Why Darwin Matters provides readers with an insiders’ guide to the evolution-creation debate, and why science should be embraced by people of all beliefs.
ORDER the audiobook 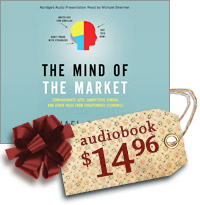 The Mind of the Market
(abridged audiobook)
by Michael Shermer $19.95

Is the capitalist marketplace a sort of Darwinian organism, evolved through natural selection as the fittest way to satisfy our needs? In this eye-opening exploration, Shermer uncovers the evolutionary roots of our economic behavior. He brings together astonishing findings from psychology, biology, behavioral economics, and neuroeconomics.
ORDER the audiobook 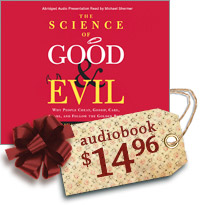 Science of Good and Evil
(abridged audiobook)
by Michael Shermer $19.95

Broad in scope, deep in analysis, and controversial. Is it human nature to be selfish or selfless, fierce or loving, moral or immoral? Examines the scientific evidence that shows that morality is deeply embedded in our being and behavior. Covers pre-moral animal behavior, neuroscience, game theory, free will, and more.
ORDER the audiobook 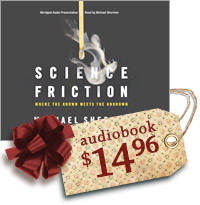 Shermer explores the very personal barriers and biases that plague and propel science, especially when scientists push against the unknown. What do we know, and what do we not know? How does science respond to controversy, attack, and uncertainty? When does theory become accepted fact?
ORDER the audiobook 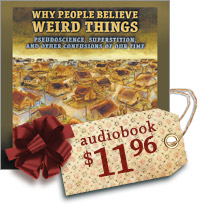 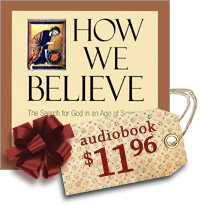 How We Believe
(abridged audiobook)
by Michael Shermer $15.95

Recent polls report that 96 percent of Americans believe in God, and 73 percent believe that angels regularly visit Earth. Why is this? Why, despite the rise of science, technology, and secular education, are people turning to religion in greater numbers than ever before? Why do people believe in God at all? An illuminating study of God, faith, and religion.
ORDER the audiobook 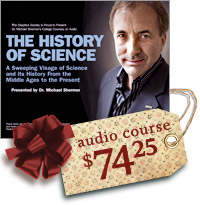 A college course of 24 lectures (25.5 hours) takes a sweeping look at science, its history and philosophy from the Middle Ages to the present, with special emphasis on defining science within the cultural context of the age, who was doing science at the time, and what their goals were in conducting science. (Lectures originally delivered Spring 1991)
ORDER the lectures on CD 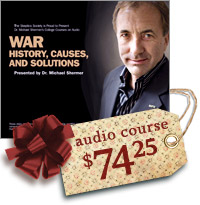 A college course of 36 lectures (27 hours) mixes straight narrative history with science, philosophy, and theory as to the proximate and ultimate causes of and solutions to war. Employing psychology, anthropology, and evolutionary theory, Shermer explores political and economic solutions to the prevention of war.
ORDER the lectures on CD 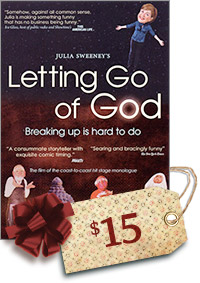 Julia Sweeney (of Saturday Night Live fame, 1989–1994) delivers one of her best-ever comedy routines, praised as brave, hilarious, and “a gale-force breathe of fresh air into a mostly polemic dialogue about religion in our time” by the Los Angeles Times. This is Julia Sweeney’s third monologue. Her first monologue, “And God Said Ha!” was nominated for a Grammy.
ORDER the DVD 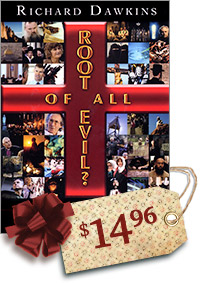 Root of All Evil?
The Original Program
by Richard Dawkins $19.95

In this two-part documentary, Oxford Professor Richard Dawkins examines how religious faith is gaining ground in the face of rational, scientific truth. Dawkins takes you to some of the world’s religious hot-spots in America and the Middle East, meeting with religious leaders and their followers, as well as scientists and skeptics, to examine the power of religion.
ORDER the 2-DVD SET 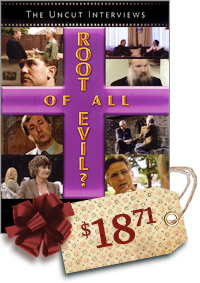 Root of All Evil?
The Uncut Interviews
by Richard Dawkins $24.95 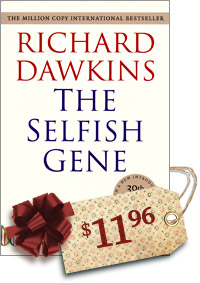 The Selfish Gene
by Richard Dawkins $15.95

This 30th anniversary edition retains all original material and a new Introduction wherein the author presents his thoughts thirty years after the publication of his first and most famous book, while the inclusion of the two-page original Foreword by brilliant American scientist Robert Trivers shows the enthusiastic reaction of the scientific community at that time.
ORDER the paperback 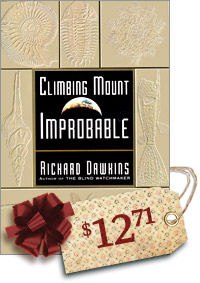 A brilliant book celebrating improbability as the engine that drives life. The human eye is so complex and works so precisely that it appears to be the product of design. How could such an intricate object have come about by chance? Dawkins builds a carefully reasoned and lovingly illustrated argument for evolutionary adaptation as the mechanism for life on earth. The eye did not come about by chance. It was designed … by evolution.
ORDER the paperback 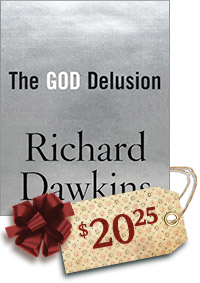 The God Delusion
by Richard Dawkins $27.00 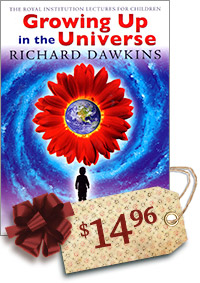 Growing Up in the Universe
by Richard Dawkins $19.95

Richard Dawkins presents a series of lectures on life, the universe, and our place in it. With brilliance and clarity, he unravels an educational gem that will mesmerize young and old alike. Wildlife, virtual reality, illuminating demonstrations, and special guests (including Douglas Adams) all combine to make this collection a timeless classic.
ORDER the 2-DVD set 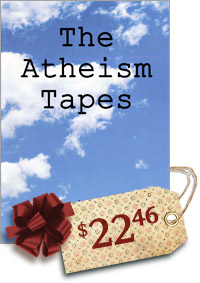 The Atheism Tapes
by Jonathan Miller $29.95

In these revealing interviews the neurologist turned playwright, filmmaker and self-described atheist Jonathan Miller filmed conversations with six leading men of science and letters, including: Dawkins, Dennett, McGinn, Miller, Turner, and Weinberg. They offer illuminating analyses of belief and disbelief from a wide range of perspectives.
ORDER the 2-DVD set 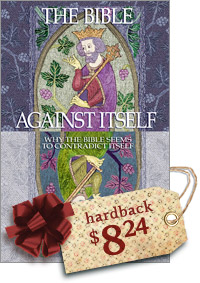 The Bible Against Itself
by Randel Helms $21.95

With depth and clarity Dr. Helms shows that, throughout the history of their formation, the Jewish and Christian scriptures developed as the by-products of ongoing theological debates. Far from expressing the unity of thought and doctrinal accord that would reflect divine inspiration, the scriptures represent a series of furious and unrelenting disputes between authors supporting often bitterly divided dogmas.
ORDER the hardcover
ORDER the paperback
ORDER the lecture on DVD