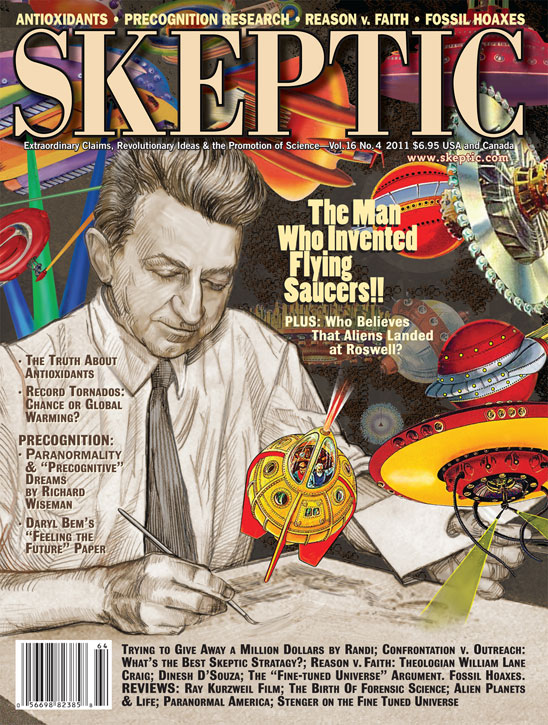 NOTE: This issue should reach current subscribers and newsstands around the end of September.

Our Newest Issue of Skeptic Magazine

The Man Who Invented Flying Saucers

IN THIS EXCITING ISSUE you’ll find: The Man Who Invented Flying Saucers! ● Pulp Fiction UFO: How the Idea of UFOs Originated ● SkepDoc on the Complexities of Antioxidants ● How the Science of Sleep Explains “Precognitive” Dreams ● The Debate Between Confrontational Activism v. Educational Outreach ● How the “Fine-tune” Argument of Creationists Works Against Them ● Junior Skeptic: Fossil Hoaxes Part 1 ● Roswell, Aliens & Belief: Who Believes That Aliens Landed at Roswell? ● Quacks & Quakes: Record Tornados. Chance or Global Warming? ● James Randi Trying to Give Away a Million Dollars; and more…

For any inquires about your subscription or to let us know about a change of address, please send an email to subscriptions@skeptic.com or call us at 1-626-794-3119. 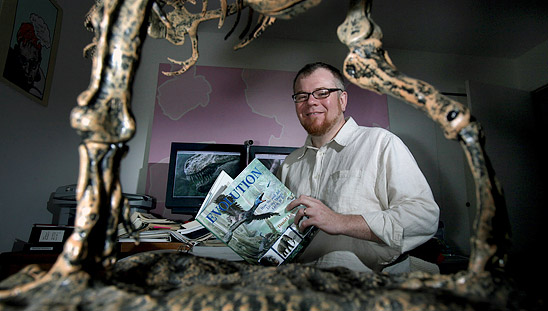 Daniel Loxton in his studio (photo by Chad Hipolito for The Globe And Mail. Used by Permission.) 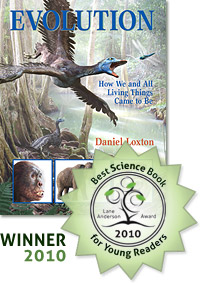 In this week’s Skepticblog, Daniel Loxton is very proud to announce that his Junior Skeptic-based children’s book Evolution: How We and All Living Things Came to Be took home the national Lane Anderson Award as the best Canadian science book for young readers at an award dinner in Toronto on September 14. Loxton explains the media frenzy about the book being “too hot for U.S. publishers.”

Chances are if you listen to MonsterTalk you probably like nature documentaries. No doubt you’ve seen stories about wolves and heard words to the effect that wolves are often maligned and that wolves have an undeserved reputation for being killers. Yet how does one reconcile the idea that dangerous wolves are a myth with the many myths and fairy tales which feature wolves as the villain? In this episode of MonsterTalk we take on the legend of the big, bad wolf and what we find may surprise you.

This episode features an interview with author Jay M. Smith, about his book Monsters of the Gévaudan: The Making of a Beast. 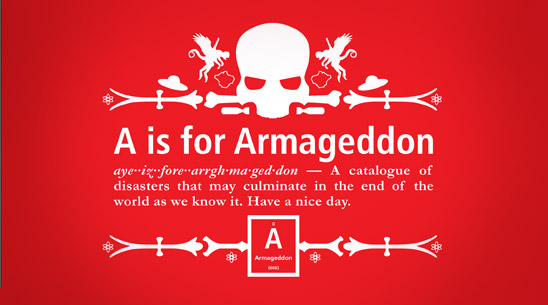 In this week’s eSkeptic, comedian Mike Moran reviews Richard Horne’s tongue-in-cheek book, A is for Armageddon: A catalogue of disasters that may culminate in the end of the world as we know it (New York: HarperCollins, 2010). Mike Moran is a Baltimore, Maryland based comedian, writer, and musician. He performs standup comedy, improvisational acting (with the Baltimore Improv Group), writes a humor column for AOL’s Patch North Baltimore, and plays bass guitar in several bands.

The End is Not Nigh Enough

“Our end is definitely nigh,” so facetiously asserts writer and illustrator Richard Horne in the introduction to his visually impressive but intellectually dull doomsday index, A is for Armageddon. Of course skeptics realize that Horne is poking fun at the endless stampede of “end-times” predictions with which the public is bombarded by the media, religious spokespersons, and drunken friends.

With A is for Armageddon, I was hoping for a light-hearted, mischievous dose of cynical enjoyment. Unfortunately, this colorful coffee-table book fails to live up to its potential as a refreshing alternative to the often sterile and serious body of skeptical literature—a field where, all too often, the only humor to be found is mean-spirited and condescending.

Before I analyze Horne’s writing, I should first note that his illustration and design skills are nearly worth the price of admission. In fact, this may be the most visually impressive coffee table book I’ve yet to encounter. Horne’s beautifully colored pop-art combines delightful cartoon fun with the grittiness of modern street art. He seamlessly blends images that range from the adorable (like the child-faced globe mascot found throughout), to the downright horrifying (check out the sinister four horsemen on page 31—why is this guy not designing heavy metal album covers?).

Unfortunately the marvelous graphic design is not matched by the snarky satisfaction that I hoped the written portion of the book would provide. The biggest problem is that, as far as skepticism goes, this book has only one thing going for it: sarcasm. Horne writes from the perspective of a gullible citizen who falls for every doomsday scare he is presented with (think Stephen Colbert). Though I admire Horne’s tenacity for authoring an entire “non-fiction” book in character, this “wink-wink” approach is incapable of leaving readers feeling that they have learned anything new (or even old).

My distaste for this style is really saying something, coming from an armchair skeptic like myself who tends to enjoy Junior Skeptic more than the rest of the magazine. Who would have thought I would be missing cold hard facts and figures so much? Most adults who read A is for Armageddon will understand that the end of the world is pretty unlikely to come anytime soon, but will have to decide (or research) for themselves why each of Horne’s tongue-in-cheek claims are absurd, and to what extent.

Though I admire Horne’s tenacity for authoring an entire “non-fiction” book in character, this “wink-wink” approach is incapable of leaving readers feeling that they have learned anything new (or even old).

Horne’s sarcastic approach to doomsday mongering is not only unenlightening, it is also often offensive, though perhaps unintentionally so. This is due to the author causally jumping between laughably implausible forecasts such as “biblical apocalypse,” and “robot attack,” and real life disasters that cause serious human suffering. Sure, we can scoff at the idea of food shortages and earthquakes deleting humanity from existence, but let’s not forget that real life human populations, on a regional scale, are frequently devastated by just such events. It’s a little difficult to laugh at real life tragedies.

Speaking of laughter, A is for Armageddon could be forgiven for its intellectual failings if only it delivered in the bookstore section in which it would most likely be found: humor. After all, this isn’t The Origin of Species, or even Why People Believe Weird Things—it’s a fun coffee table book (at least in theory). Sadly, Horne’s comedic abilities are on par with his skeptical skills. Lame attempts at humor, such as “(genetic) switches are the reason you don’t have eyes in the back of your head, though your mother will lead you to believe she does,” and “if glaciers melt, then Whiteland will have to be renamed Greenland,” fall as flat as the Earth is not.

It seems we will have to continue to wait for a skeptical humorist who is both entertaining and informative. Like a film that is well produced but poorly scripted, A is for Armageddon is all style and no substance. All I wanted from it was a fun, easy read that would perhaps arm me with a few more rounds of skeptical ammo for the next time I’m trapped in a debate about why there is no reason to worry about the future of Social Security, since we won’t be around anyway. Instead I got visual enjoyment, and not a whole lot else. Richard Horne is very talented, but we can’t all be renaissance men. Stick to illustrating, Richard, and I predict your career will not be nigh anytime soon.

OWN THE COMPLETE 21 EPISODE SEASON 3 of Mr. Deity, complete with commentary by the cast. The DVD includes: the best of the begging segments; the Larry/Deity interviews (including eight episodes not available anywhere else; a behind the scenes look at the making of Mr. Deity; gag reels; and the first six episodes of “Words” with commentary. ORDER the DVD.

Mr. Deity at the 2008 Skeptic Conference
by Mr. Deity

AT OUR 2008 CONFERENCE, Mr. Deity (aka Brian Keith Dalton, the creator) and his cast performed a series of live skits, including a new one developed specifically for this conference. The performances were interspersed with behind-the-scenes discussion by Dalton and the rest of the cast about how the series was developed and written. Dalton and his cast also considered a few of the more serious theological issues and discussed the reactions they have gotten from both supporters and critics… READ MORE and order the presentation on DVD.

ACTOR, COMEDIAN, AND WRITER Dean Cameron puts on a hilarious show about the popular email scam which involves a supposedly wealthy individual who offers to split millions of dollars with you if only you help him get it out of his country by channeling it through your bank account. Naturally there may be some small fees you must pay first in order to implement this transaction… Cameron reads actual emails exchanged with a Nigerian scammer, who he strings along with ridiculous anecdotes about his life and times here in America. Laugh out loud funny as he tries to get the scammer to first make a good faith payment to him! Order the DVD.

In the style of Dean Cameron’s attempt (above) to scam the Nigerian email scammers, read this entertaining Skepticblog post by Michael Shermer about an email invitation he received to speak at various venues around the world and the hilarious attempts by the scammers to prove their legitimacy. 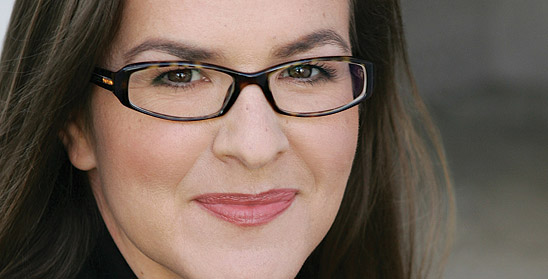 Next at Caltech: Annie Jacobsen

Area 51: An Uncensored History of
America’s Top Secret Military Base

IT IS THE MOST FAMOUS MILITARY INSTALLATION IN THE WORLD. And it doesn’t officially exist. Located a mere seventy-five miles outside of Las Vegas, the base has never been acknowledged by the U.S. government. Myths and hypotheses about Area 51 have long abounded, thanks to the intense secrecy enveloping it. Some claim it is home to aliens, underground tunnel systems, and nuclear facilities. Others believe that the lunar landing itself was filmed there. The prevalence of these rumors stems from the fact that no credible insider has ever divulged the truth about his time inside the base. Until now…

READ MORE ABOUT THIS LECTURE