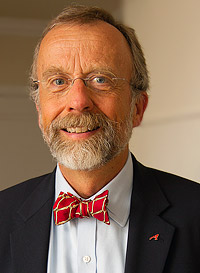 Why We Believe in God(s):
A Concise Guide to
the Science of Faith

IN THIS LECTURE BASED ON HIS NEW BOOK, psychiatrist Andy Thomson examines the evolution, history, anthropology, sociology, and psychology of religious beliefs and provides a brief and accessible guide to the exciting new discoveries that allow us to finally understand why and how the human mind generates, accepts, and spreads religious faith and god beliefs. Dr. Thomson is a staff psychiatrist at the University of Virginia’s Student Health Center and the Institute of Law, Psychiatry and Public Policy, and maintains a private practice of adult and forensic psychiatry in Charlottesville, Virginia. He serves as a trustee of the Richard Dawkins Foundation for Reason and Science.

NEW ON SKEPTICBLOG.ORG
Can burn patients really be healed from a distance by phone?

In this week’s Skepticblog, Michael Shermer discusses Dr. Marja Pronk, a woman who claims she can heal burn patients from a distance by phone. Can such a claim be tested ethically? If so, what would such a study look like? 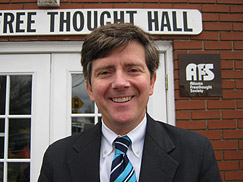 This week on Skepticality, Swoopy pops in for a quick chat with Derek about what she has been doing, and has some fun, new ideas for the show. Derek interviews Sean Faircloth about his new role at the US branch of the Richard Dawkins Foundation For Reason and Science and about his new book, Attack of the Theocrats: How the Religious Right Harms Us All—and What We Can Do About It (with a Foreword by Richard Dawkins). 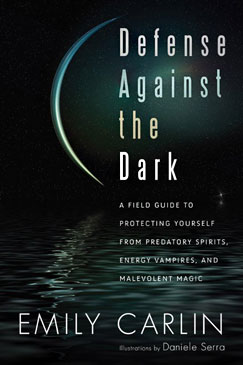 Something Wiccan
This Way Comes

In this episode of MonsterTalk, two skeptics interview a witch about how to battle evil with magic. Emily Carlin is a magical instructor at The Grey School—an online magical university and the author of Defense Against the Dark: A Field Guide to Protecting Yourself from Predatory Spirits, Energy Vampires and Malevolent Magic. Is magic the best defense against evil monsters? Or is skepticism? Pull up a chair and
sit a spell to find out. 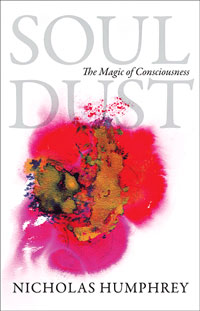 A review of Soul Dust:
The Magic of Consciousness

In this week’s eSkeptic, Robert L. Martone reviews Nicholas Humphrey’s book Soul Dust: The Magic of Consciousness (University Press, 2011, ISBN: 978-0691138626). Martone is a research scientist and is the Neuroscience Therapeutic Area Lead for the Covance Biomarker Center of Excellence. He has extensive experience in neuropharmacology research, having led neuroscience drug discovery and technology teams through all phases of drug discovery from target identification through clinical trials with expertise in both small molecule and protein therapeutics. He also has several years of academic research experience in molecular neurobiology, with a focus on the molecular genetics of familial neuropathies, and CNS tumor biomarker development.

The Soul of Consciousness

Consciousness is an enigmatic hallmark of human existence. With his book, Soul Dust: The Magic of Consciousness, psychologist Nicholas Humphrey takes an ambitious approach to the problems of consciousness with a scope that encompasses science, literature and philosophy.

Humphrey defines consciousness in terms of the familiar model of the “Cartesian Theater” wherein our experience of consciousness is merely an internal representation of the external world played out upon a mental stage. He postulates that consciousness emerged from the gradual internalization of stimulus-response circuits. In the most primitive state, these circuits consist of neuronal loops that direct responses at the site of stimulation, while in the more advanced state, both the sensory and motor systems are internalized in the brain, and the stimulus-response loop may be entirely internal to the organism. Here again, Humphrey treads familiar ground, with inspiration from Hofstadter’s “strange loops,”1 but he missed an opportunity to explore in this context “mirror neurons”—those motor neurons first described by Rizzolatti that are activated in the brain of an animal either when that animal performs an activity or when it observes that same activity performed by another animal.2

What, then, is the selective advantage that drives consciousness? Humphrey posits that consciousness evolved simply because humans enjoyed being conscious. This psychic or metaphysical benefit conferred upon conscious humans is derived not so much from adaptation to the physical world, according to Humphrey, as it is to a metaphysical niche that he calls the “Soul Niche.”

Perhaps one should not expect extraordinary scientific scholarship in a book that contains the word “soul” in the title and “magic” in the subtitle, but Humphrey appears to have ambitions to be taken seriously, or at least to be seen as a provocateur. When justifying his use of the term “soul,” he asks, “Should I really be using it so freely? Doesn’t the word “soul” carry too much baggage? Yes it does, and I should—I should because it does” (156). A certain narcissism creeps into his narrative at times as when, for example, he gushed with Oprahesque abandon, “For if you have a miracle at your very center, then miraculous you are (emphasis his, 138).” He supports his contention that consciousness provided positive selective pressure through human enjoyment of consciousness with life-affirming passages from Rupert Brooke, Gerald Manley Hopkins and even selections from The Sound of Music, but he is apparently less familiar with Nietzsche, Styron or Bukowski. Nor does the prevalence of depression (9.5% of the adult population in the U.S., 10% in the UK) dissuade him from his arguments, which are at times embarrassingly provincial. For example, he contemplates what he supposes would be the tedious world of being human without consciousness, noting, “We need to ask whether a dreary world is necessarily one in which an animal or a human would lead a less successful life. We need to establish what, if any, is the biological advantage of being awestruck” (120). This leads one to wonder whether he is completely unaware of how much of humanity—all of them quite conscious—live in such a dreary world, with very little to prompt awe, and with little hope for escape from the anguish of hunger and destitution?

Consciousness emerges with age, and the consciousness of an infant is very different from that of an adolescent, which in turn is removed from that of a middle-aged adult. Throughout human existence from the Paleolithic era through early modern times, life expectancy was around 30 years, and while humans are sexually mature in their teens, the human brain—the substrate of consciousness—continues to develop until the mid 20s. If consciousness were to have evolved, the aspects of consciousness that conferred positive selective pressure were likely those that are manifest in the teen years. Humphrey acknowledges this emergence, yet still fumbles with it in his arguments. For example, he cites childhood curiosity as exemplifying the enjoyment of consciousness: “Human children in the first three years of life are consumed by a desire to explore and experiment with objects” (123), yet later acknowledges that human babies lack the unified sense of self that underlies consciousness. Similarly, he describes the “presentism” of a baby enjoying a bath, but it is precisely that presentism—that lack of historical context and indifference to the future—that he compared to the reveries of a gnat or a jackdaw and that would characterize any pre-conscious organism, infants included. Differences between teens and older adults that manifest in, for example, lower risk aversion are left fully unexplored in this work.

It may well be that humans created a metaphysical niche of their own, however, success and failure in that niche may be far more consequential than Humphrey’s rather banal choice between enjoyment and dreariness. Humphrey stumbles upon it when he states that, “human beings’ fear of death must always have been highly visible to natural selection—and hence so must have been the consciousness that lies behind it” (96–97). Has this fear of death led to avoidance of war or of killing in human culture? Obviously not. Rather, it may be that consciousness, and the theory of mind that is part of it, is essential to protect humans from their fiercest competitors—other humans. It is in this murderously competitive realm with other people that internalization of stimulus-response loops becomes important by providing a level of secrecy regarding one’s own knowledge and intentions. Similarly, mirror neurons would offer a selective advantage by providing an internalization of another’s intentions.

Humphrey touches upon the historical context of consciousness, stating that, “during the Renaissance [attitudes] shifted from a sense of unconscious fusion with the world towards a state of conscious individuation” (141). Yet Renaissance humanism did not rouse a sleeping medieval Europe to consciousness. In fact, it is narcissism, that “state of detached self-absorption” (106) that is the true focus of Humphrey’s work rather than consciousness per se, and the reason that this work falls short in providing a compelling explanation of consciousness.

The Quest for Consciousness: A Neurobiological Approach
by Dr. Christof Koch

Caltech neuroscientist, Dr. Koch asks: what are the biophysical and neurophysiological operations that give rise to specific conscious perceptions? How can the brain, a physical system, express subjective states such as emotions? How can neural activity give rise to sensations like pain? What is consciousness? Koch presents the best scientific answer to this question.

READ MORE AND ORDER THE DVD.

From Particles to People: The Laws of Nature and the Meaning of Life
by Dr. Sean M. Carroll

We are made of particles, evolving and interacting according to the laws of physics. And we know what those laws are—the progress of modern science has reached a point where the laws underlying everyday life are completely understood. This understanding lets us draw strong conclusions about the milieu in which we live. There is no telekinesis, astrology, or life after death. What does this mean for our understanding of consciousness, free will, and the meaning of life? Taking the laws of nature seriously opens a vista of possibility, freeing us from outmoded ideas about what it means to be human.
READ MORE AND ORDER THE DVD. 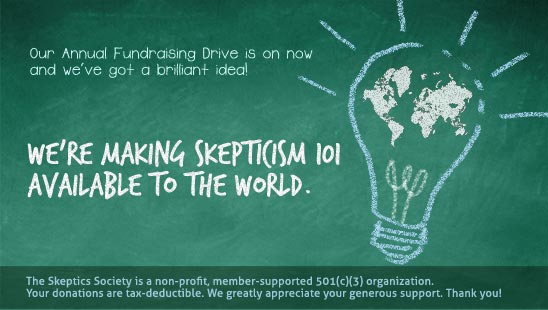 Help Send Skepticism 101 into the World!

We encourage you to choose the monthly recurring donation option. Simply tell us how long you want your donation to recur (using the drop-down menu on the donation page) and we’ll set up automatic withdrawal for the amount you select.