NEW ON SKEPTICBLOG.ORG
Teaching Allah and Xenu in Indiana

Michael Shermer criticizes the Indiana State Senate’s approval last month of a bill that would allow public school science teachers to teach religious origin stories in their classrooms, including those from: Christianity, Judaism, Islam, Hinduism, Buddhism, and Scientology. 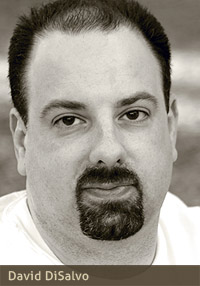 This week on Skepticality, Derek talks with David DiSalvo about his newest book, What Makes Your Brain Happy and Why You Should Do the Opposite, which delves into the ways in which we can recognize our brains’ faults and use them to live more fulfilled lives. DiSalvo is an award-winning public outreach and education specialist, and a popular writer for Scientific American Mind, Psychology Today, and other publications and blogs.

Get the Skepticality App and enjoy your science fix and engaging interviews on the go! Available for Android, iPhone, iPad, and iPod Touch iOS 3.0 or later. 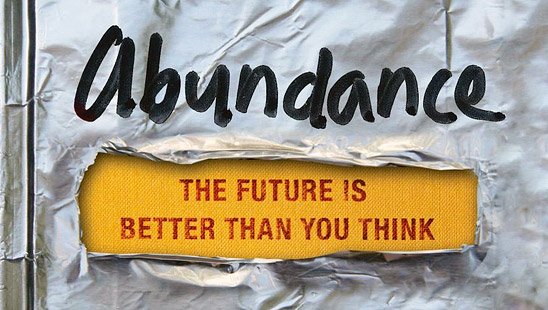 Rapidly advancing technologies may have the potential not only to spread information but to solve some of humanity’s most vexing problems. In this week’s eSkeptic, Michael Shermer reviews a just-released book called Abundance: The Future is Better Than You Think by Peter H. Diamandis and Steven Kotler (Free Press, ISBN: 978-14516-1421-3). Together they have produced a manifesto for the future that is grounded in practical day-to-day solutions addressing the world’s most pressing problems: overpopulation, food, water, energy, education, healthcare, and freedom. A slightly different version of this review was originally published in the Wall Street Journal on Wednesday, February 22.

It’s Getting Better All the Time

a review by Michael Shermer

If you read a major newspaper such as the New York Times or Wall Street Journal cover to cover every day for a week you will have consumed more digital information than a citizen in the 17th century Western world would have encountered in a lifetime. That’s a lot of digital data, but it’s nothing compared to what is on the immediate horizon. By comparison, from the earliest stirrings of civilization thousands of years ago to the year 2003, all of humankind created a grand total of five exabytes of digital information. An exabyte is one quintillion bytes, or one billion gigabytes. That’s a one followed by 18 zeros, and from 2003 through 2010 we created five exabytes of digital information every two days. By 2013 we will be producing five exabytes every ten minutes. How much information is this? The 2010 total of 912 exabytes is the equivalent of 18 times the amount of information contained in all the books ever written. This means that the world is not just changing, and the change is not just accelerating, but the rate of the acceleration of change is itself accelerating. 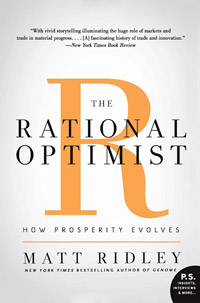 This and many other examples of accelerating returns are documented in Abundance: The Future is Better Than You Think by Peter H. Diamandis and Steven Kotler. Diamandis is the Chairman and CEO of the X PRIZE Foundation and the founder of more than a dozen high tech companies. Kotler is a journalist who writes for the New York Times magazine, Wired, Discover, GQ, and National Geographic. Together they have produced a manifesto for the future that is grounded in practical day-to-day solutions addressing the world’s most pressing problems: overpopulation, food, water, energy, education, healthcare, and freedom. They suggest that “humanity is now entering a period of radical transformation where technology has the potential to significantly raise the basic standard of living for every man, woman and child on the planet. Within a generation, we will be able to provide goods and services that were once reserved for the wealthy few to any and all who need them.” Accelerating change is happening in many areas: 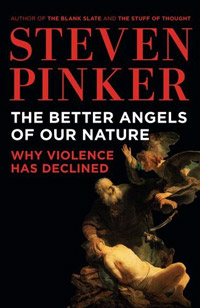 The timing of this book is propitious. Between the 2011 Christian end-times soothsayers, the 2012 Mayan Calendar doomsayers, gloomy environmentalists, and the announcement in January by the Bulletin of Atomic Scientists that their Doomsday clock had been advanced to five minutes to midnight (and now includes environmental degradation and biological weapons alongside nuclear weapons as the likeliest candidates for our demise), how can anyone be so optimistic? With seven billion people now pressing up against the Earth’s carrying capacity there are seemingly intractable problems to be solved. Isn’t pessimism the appropriate response? Who’s right, the optimists or the pessimists?

The problem turns on cognitive biases that slant our interpretation of the data. Optimism is good for overcoming obstacles that are part of daily life, but over-optimism can blind one to adversities that should be heeded. In a Canadian study of inventors, for example, of those who participated in the Inventor’s Assistance Program in which they paid for objective evaluations of their invention on 37 different criteria, 47 percent continued working on their projects even after they were told that it was hopeless, and as a consequence they incurred losses double that of their more realistic colleagues. Optimism helps entrepreneurs override normal “loss aversion,” in which losses hurt twice as much as gains feel good, an emotion we evolved in our evolutionary environment of scarcity and uncertainty. Loss aversion leads most of us to be short term in our thinking. We discount the future in ways so predictable that economists have formulas to describe it. We focus on immediate events and bad news, and are blind to long-term trends and good news. Diamandis and Kolter not only acknowledge these cognitive biases, they address them head on as one more obstacle to abundance to be overcome.

I have long been skeptical of both doomsayers who project the end of the world in our generation, as well as futurists who proclaim that the Next Big Thing to revolutionize humanity and save the planet will happen in our lifetime. To date, the end-of-the world doomsters have been spectacularly and often embarrassingly wrong. And the futurists who craft a utopian narrative about how one day we will live forever, colonize the galaxy in starships, and materialize food and drink in replicators are indistinguishable from producers of science fiction and fantasy. Skeptics are from Missouri: Show Me. Diamandis and Kolter do just that, describing in specific detail how the revolution has already begun and that such abundance can be realized in our lifetime through three current forces: 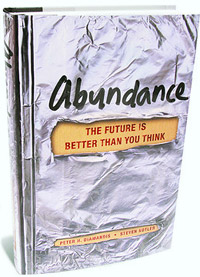 The principles behind this process of abundance creation include: bottom-up v. top-down; non-linear v. linear; horizontal v. hierarchical; private entrepreneurship v. public works; small group v. large corporation; competition for prizes v. make-work for paycheck; risk disposed v. risk averse; Nonzero win-win v. zero-sum win-lose. The trend lines outlined by the authors are real enough, and if these principles were applied worldwide such abundance should indeed be realizable, in the long run if not in the short. The biggest hurdles, however, are not scientific or technological, but political. There are still too many corrupt dictators, third-world thugs, dear leaders, and backwards looking governments that would prefer corralling their people into medieval theocracies in order to enrich themselves. Still, as Matt Ridley demonstrated in The Rational Optimist and Steven Pinker in The Better Angels of Our Nature, even the political trend lines are moving in the right direction. In any case, as Diamandis likes to say: “The best way to predict the future is to create it yourself.”

Skeptical perspectives on the future…

The Rational Optimist:
How Prosperity Evolves
with Dr. Matt Ridley

Ridley demonstrates that life is getting better and at an accelerating rate. Food availability, income, and life span are up; disease, child mortality, and violence are down — all across the globe. Though the world is far from perfect, necessities and luxuries alike are getting cheaper; population growth is slowing; Africa is following Asia out of poverty; the Internet, the mobile phone, and container shipping are enriching people’s lives as never before…
ORDER THE LECTURE ON DVD.

In a stunning presentation, UCLA Professor of Geography and Earth and Space Sciences, Dr. Laurence Smith, forecasts what our planet will be like in the year 2050, distilling his 15 months of research traveling the Arctic Rim with cutting-edge research into four global forces: demographic trends, natural resource demand, climate change, and globalization. The result is both good news and bad … This lecture combines the lessons of geography and history with state-of-the-art model projections and analytical data — everything from climate dynamics and resource stocks to age distributions and economic growth projections. ORDER THE LECTURE ON DVD.

The Future of Science, Technology,
and Education
with Bill Nye and James Randi

Bill Nye “the Science Guy” wows the audience with wit, humor, and inspiration about the future of science, technology, and education, how he got his start as “the science guy” and what we can all do to “change the world” so that everyone can embrace the wonders of science and reason. Also featured is a very special appearance by James “The Amazing” Randi, who regaled the audience with stories from his forthcoming book, A Magician in the Laboratory, and along the way explained how to test paranormal and pseudoscientific claims, his many challengers who have tried to win the million-dollar challenge offered by the James Randi Educational Foundation, and inspired a new generation of young skeptics in the audience to go out and make a difference by thinking skeptically and critically about all claims. This DVD is one of five available from our Science Symposium held at Caltech in 2011.
ORDER THE LECTURES ON DVD.

Our Next Lecture: Dr. Eric Topol 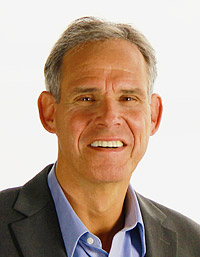 The Creative Destruction of Medicine: How the Digital Revolution Will Create Better Health Care

WHAT HAPPENS WHEN YOU COMBINE cellular phone technology with the cellular aberrations in disease? Or create a bridge between the digital revolution with the medical revolution? How will minute biological sensors alter the way we treat lethal illnesses, such as heart attacks or cancer? These questions, and more, are answered by Dr. Eric Topol, a leading cardiologist, gene hunter and medical thinker. Topol’s analysis draws us to the very frontlines of medicine and leaves us with a view of a landscape that is both foreign and daunting. As baby-boomers approach retirement age, they are going to be confronted with important choices among many new medical technologies. Don’t miss this important lecture based on Dr. Topol’s new book.