In this week’s Skepticblog, Michael Shermer shares his experience of The Amaz!ng Meeting 2012 and Freedom Fest in which he participated this past weekend.

Evolutionary “selfish gene” theory well accounts for why we would be nice to our kin and kind but why would strangers would be nice to one another? In this week’s eSkeptic, Michael Shermer reviews The Moral Molecule: The Source of Love and Prosperity by Paul J. Zak (Dutton, 2012, ISBN: 978-0-525-95281-7) and Moral Origins: The Evolution of Virtue, Altruism, and Shame by Christopher Boehm (Basic Books, 2012, ISBN: 978-0-465-02048-5). This review was originally published in both the print and online edition of the Wall Street Journal on May 26, 2012, as “Kin and Kindness.” 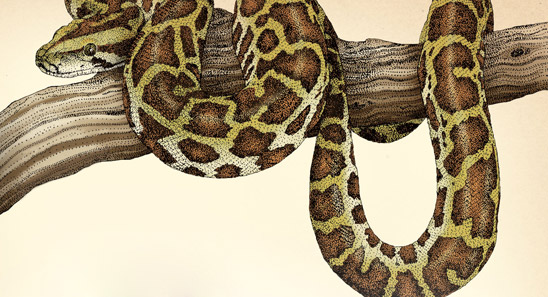 It is the oldest and most universally recognized moral principle that was codified over two millennia ago by the Jewish sage Hillel the Elder: “Whatsoever thou wouldst that men should not do to thee, do not do that to them. This is the whole Law. The rest is only explanation.” That explanation has been the subject of intense theological and philosophical disputation for millennia, and recently scientists are weighing in with naturalistic accounts of morality, such as the two books under review here.

Paul J. Zak is an economist and pioneer in the new science of neuroeconomics who built his reputation on research that identified the hormone oxytocin as a biological proxy for trust. As Zak documents, countries whose citizens trust one another have higher average GDPs, and trust is built through mutually-beneficial exchanges that result in higher levels of oxytocin as measured in blood draws of subjects in economic exchange games as well as real-world in situ encounters. The Moral Molecule is an engaging and enlightening popular account of Zak’s decade of intense research into how this molecule evolved for one purpose—pair bonding and attachment in social mammals—and was co-opted for trust between strangers.

The problem to be solved here is why strangers would be nice to one another. Evolutionary “selfish gene” theory well accounts for why we would be nice to our kin and kind—they share our genes so being altruistic and moral has an evolutionary payoff in our genes being indirectly propagated into future generations. The theory of kin selection explains how this works, and the theory of reciprocal altruism—I’ll scratch your back if you’ll scratch mine—goes a long way toward explaining why unrelated people in a social group would be kind to one another: my generosity to you today when my fortunes are sound will pay off down the road when life is good to you and my luck has run out. What Zak has so brilliantly done is to identify the precise biological pathways that explain the mechanics of how this system evolved and operates today. 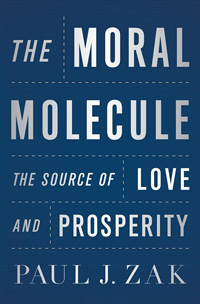 The Moral Molecule is loaded with first-person accounts of how Zak got his data, starting with a wedding he attended in the English countryside to draw the blood and measure the oxytocin levels of the bride, groom, and accompanying parents before and after the vows. The half-life of oxytocin is measured in minutes, so Zak had to draw 24 blood samples in under ten minutes that then had to be frozen and shipped back to his lab for analysis, the results of which “could be mapped out like the solar system, with the bride as the sun,” he vividly recalls. The bride’s oxytocin level shot up by 28 percent after vows were spoken, “and for each of the other people tested, the increase in oxytocin was in direct proportion to the likely intensity of emotional engagement in the event.” Bride’s mother: up 24 percent. Groom’s father: up 19 percent. The groom: up only 13 percent. Why? It turns out that testosterone interferes with the release of oxytocin, and Zak measured a 100 percent increase in the groom’s testosterone level after his vows were pronounced! How far will Zak go to get his data? In the western highlands of Papua New Guinea he set up a make-shift lab to draw the blood from tribal warriors before and after they performed a ritual dance, discovering that the “band of brothers” phenomena has a molecular basis in oxytocin.

The Moral Molecule aims to explain “the source of love and prosperity,” which Zak identifies in a causal chain from oxytocin to empathy to morality to trust to prosperity. Numerous experiments he has conducted in this lab that are detailed in the book demonstrate that subjects who are cooperative and generous in a trust game have higher levels of oxytocin, and infusing subjects with oxytocin through a nose spray causes their generosity and cooperativeness to increase. Zak concludes his book with a thoughtful discussion of how liberal democracies and free markets produce the types of social systems that best enable people to interact in a way that puts them on the oxytocin-empathy-morality-trust-prosperity positive feedback loop. Every corporate CEO and congressman should read this book before making important decisions.

In Moral Origins: The Evolution of Virtue, Altruism, and Shame the USC evolutionary anthropologist Christopher Boehm tackles head-on the “free-rider” problem in explaining the origins of morality. Kin selection and reciprocal altruism only go so far in explaining why we would have evolved the propensity to be nice to our fellow group members, because big bullies and Machiavellian manipulators could easily take advantage of naively engendered trust. Before long, free-riders operating on the goodwill of other groups members would gain an evolutionary reproductive advantage and swamp the gene pool with psychopaths lacking any pretense of real morality and thereby reduce humanity to an inhumane Lord of the Flies. But that did not happen and Boehm explains why: we evolved the social technology of shaming and shunning free riders who violated social norms, along with the desire to punish those who attempted to unfairly gain an upper hand against naïve group members or those who could be exploited by powerful alpha-male bullies. This explains why we not only practice but often even enjoy “moralistic punishment” against those who cheated or bullied us. It’s a powerful emotion based in evolutionary logic that I felt the full visceral effect of during the revenge scene from the film The Girl with the Dragon Tattoo that followed the pornographically brutal rape scene of the central character Lisbeth Salander. There’s a deep emotional satisfaction that comes from seeing a bully get his comeuppance. It’s an evolved moral emotion necessary to deal with the realities of a social life that includes bullies and cheaters. 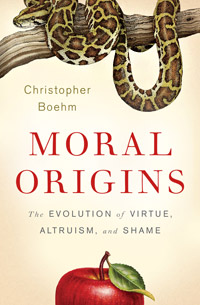 Boehm’s data comes from his direct observations of primate groups and indigenous populations over many decades, which he extrapolates back into our Paleolithic past of hunter-gatherers on the plains of Africa. Hunting wild game is a dangerous enterprise for a puny bipedal primate, so collaborative hunting through social bonding evolved. The free-rider problem of individuals shirking their responsibilities, laying back during risky moments, or taking more than their fair share of the hunt, were vigorously punished through shame and shunning, and even expulsion and capital punishment. Knowing that there are consequences to cheating the system, humans evolved a moral emotion of guilt and shame that enabled our ancestors to learn to control their impulses to do the wrong thing and to be reinforced for and feel good about doing the right thing.

Boehm estimates that this system evolved over the last 50,000 years as human groups became vigilantly egalitarian, and yet our psychology contains much older selfish moral emotions that are often in conflict with these newer sentiments. This goes a long way toward explaining why we often feel selfish and strongly desire to first take care of ourselves and our kin, while also feeling tribal and bonded with our fellow group members, especially when we are collectively threatened by other tribes. As Boehm notes in a moving epilogue reflection on humanity’s moral future, “people in a band are basically economic equals, whereas our world of nations is very far from being egalitarian in this way. This economic inequality can be seen as a special engine that helps to drive international conflict, and it stands in the way of creating a more effective international order.” We can’t go back, but we can go forward armed with the knowledge that deep-thinking scientists such as Christopher Boehm provide in such important contributions to humanity’s prospects as Moral Origins.

Shermer tackles two of the deepest and most challenging problems of our age: (1) The origins of morality and (2) the foundations of ethics. Is it in our nature to be moral, immoral, or amoral? If we evolved by natural forces then what was the natural purpose of morality? If we live in a determined universe, then how can we make free moral choices? If there is no outside source to validate moral principles, does anything go? Can we be good without God? Shermer peels back the inner layers covering our core being to reveal a complexity of human motives…

The Science of Good & Evil
by Michael Shermer

Broad in scope, deep in its analysis, and controversial to its core, this book applies the latest findings of science to offer an original model of the bio-cultural evolution of morality and a new theory of provisional ethics that challenges the reader to confront these timeless issues from a new perspective — one that suggests that both morality and immorality evolved in human biological and cultural evolution, that we can make free moral choices in a determined universe, that moral principles can have a sound rational basis supported by empirical evidence (without being dogmatically absolutist or dependent on an external source of validation), and that we can be good without God.

The Moral Landscape
by Sam Harris

In this explosive new book, Sam Harris tears down the wall between scientific facts and human values, arguing that most people are simply mistaken about the relationship between morality and the rest of human knowledge, and urges us to think about morality in terms of human and animal well-being, viewing the experiences of conscious creatures as peaks and valleys on a “moral landscape.” Because there are definite facts to be known about where we fall on this landscape, Harris foresees a time when science will no longer limit itself to merely describing what people do in the name of “morality”; in principle, science should be able to tell us what we ought to do to live the best lives possible.