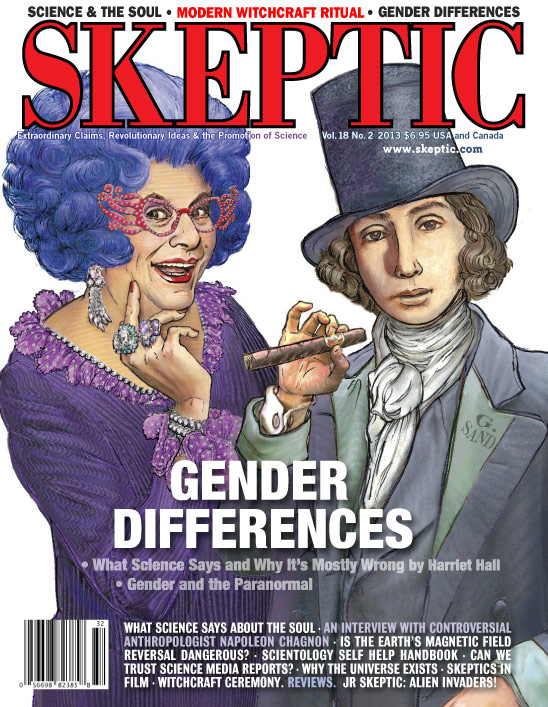 The latest issue is now available digitally via the Skeptic Magazine App for iOS, Android, BlackBerry PlayBook, Kindle Fire HD, Mac, PC, and Windows 8 devices. You can also pre-order the print issue from Shop Skeptic. This issue won’t likely hit newsstands for another week or two.

In this week’s eSkeptic, Donald R. Prothero reviews The Universe Within: Discovering the Common History of Rocks, Planets, and People, by Neil Shubin (Pantheon, New York, 2013). Read Prothero’s bio after the article. 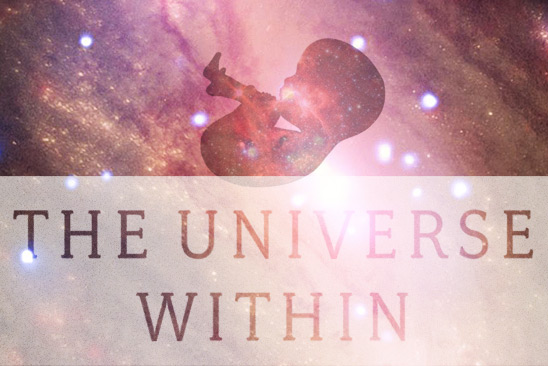 Written in Our Genes…and Our Atoms

Popularizing science, and writing science trade books for general audiences, is a challenging business. As an author of trade science books myself, I know how hard it is to write a book that sells well. Many of my fellow scientist-writers complain that the trade science book market is vanishing as fewer and fewer people read much any more, and those who do read a lot don’t read non-fiction/science. Only a handful of scientists (Carl Sagan, Isaac Asimov, Stephen Jay Gould, Richard Dawkins, and just a few others) have managed to do it well for a long time. They are among the few that have reached the best-seller lists and achieved celebrity status so they are recognizable names and faces (and some have even appeared on The Simpsons, the ultimate arbiter of pop-culture status).

Some of these people (especially Sagan) were attacked and scorned by their scientific peers for being “too popular” and no longer serious about their science, even though studies have shown that Sagan and Gould and the others were just as productive in their peer-reviewed science even as they reached superstar status. On the other hand, many people have cried out for the scientific community to provide us with more Sagans and Goulds who can make science interesting and comprehensible to a public that is becoming increasingly ignorant of science, or sucked into pseudoscience of UFOs and Bigfoot, or the junk science of creationists, anti-vaxxers, and climate change deniers.

 Into this pantheon of scientific luminaries has stepped Neil Shubin, author of the previous mega-best seller, Your Inner Fish, which explored the evidence of evolution as shown by our anatomy, and described in parallel the story of his field research that led to the discovery of the “fishibian,” or Tiktaalik. I’ve known Neil since he was an eager young Columbia undergrad, taking classes with me at the American Museum of Natural History when I was a graduate student there. Together, we worked on a revision of the Oligocene horses Mesohippus and Miohippus, which was one of Neil’s first scientific papers and finally published in 1989. After graduating from Columbia, Neil got his doctorate at Harvard working on the evo-devo of tetrapod limbs. Then he spent many years at Penn where he focused on finding more fossils showing the transition from fish to amphibian, and finally was lured to University of Chicago, where he has risen through the ranks to become Associate Dean of Biological Sciences. 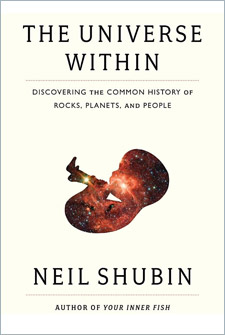 His newest book, The Universe Within: Discovering the Common History of Rocks, Planets, and People, has made a big splash in the media, and garnered Neil his second appearance on the Colbert Report. In many ways, it follows the successful elements of his previous books: interwoven with tales of his own research and the hardships of his field expeditions in the Arctic are vivid anecdotes and examples from the structure of nature that reinforce the point that evolution is apparent all around us, at every level from ecosystems to atoms. In this book, however, he weaves a thread of stories about famous people and events in the history of science that lead to a particular discovery about our world. For example, his account of Big Bang cosmology is leavened with the story of the “Harvard Computers.” This was not an early computer in the modern sense, but a group of women hired to do tedious mathematical calculations for Harvard astronomer Edward Charles Pickering. Some of them went on to their own discoveries, such as the method of determining an object’s distance by its brightness. Shubin then completes the tale by talking about Hubble and Mt. Wilson and the expanding universe, and then the accidental discovery of the cosmic background radiation by Bell Lab engineers Penzias and Wilson, who were just looking to get the noise and static out of their new microwave receiver.

This leads to the point that we are all made of “stardust,” elements born during the first milliseconds of the Big Bang, and that those elements have been recycled through the universe many times. Shubin discusses the fact that we are the only planet that ended up with liquid water. He describes how the gravitational pull of Jupiter affects certain key processes on earth, and even the shape and distribution of the rest of the mass in the solar system. Shubin describes the events that led to the formation of the moon, which were not understood until the Apollo astronauts brought back moon rocks. He talks about the discovery of our internal biological clocks, and how we are slaves of circadian rhythms that operate even on the cellular level, so that our attempts to adjust to “jet lag” or travel multiple time zones are not just annoying, but unhealthy. 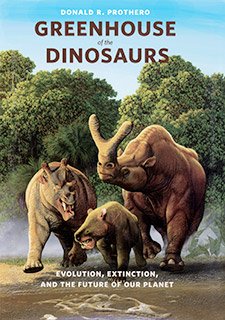 Shubin’s remaining chapters discuss the people and events that led to the discovery of plate tectonics; the issues about the origin of life and the evolution of multicellularity and an oxygenated atmosphere; the early discovery of mass extinction in the fossil record, leading to the battles over the possibility of periodic extinctions (and the interesting stories of the major players in each of these developments); and the events that led to the end of the greenhouse world of the dinosaurs and the modern icehouse world. Here, he follows the Raymo and Ruddiman idea that increased Himalayan uplift and weathering was the carbon sink that got rid of the Mesozoic greenhouse gases. Unfortunately, more recent research (discussed in my book Greenhouse of the Dinosaurs) points to other causes. (Besides, the Raymo-Ruddiman model cannot get around the evidence that the Himalayas rose in the Miocene, but the cooling began in the middle Eocene, at least 30 million years earlier).

His chapter on the Ice Ages recounts the amazing stories of Louis Agassiz, the discovery of the orbital variation cycles by Croll and Milankovitch, and the accidental discovery of the importance of Greenland ice cores as a side effect of the now-abandoned Camp Century military effort. His final chapter recounts many of the unlikely coincidences and factors (from the drying of the African savannah to the effects of rapid climate change) that may have led to the success of one bipedal primate in Africa that became us.

In short, Shubin’s book is a primer on some basic science concepts from astronomy and cosmology to earth chemistry and paleoclimatic history, to basic evolution and biology and a bit of anthropology, all surrounded by colorful and sometimes amazing anecdotes about the people who made these discoveries. It is intended as easy reading for a lay audience, so experienced scientists will find parts of it within their own fields too elementary, but there’s something in it for everyone.

Over and over again, Shubin emphasizes how much of this science was found by accident by people looking for something else (e.g., the Penzias-Wilson discovery of the microwave background radiation), or as a side effect of a much bigger effort (such as Camp Century, a military failure but a scientific success). Like his mentor, Stephen Jay Gould, he also reminds us of the elements of chance and contingency in nature, so that if any part of the experiment were run differently (e.g., no Jupiter to dominate the solar system), we would not be here to discuss it. In many ways, the book reminds me of the late 1970’s BBC series Connections with James Burke, which explored how events of the past are interconnected, and determine what kind of world we have today. All of the universe, and all of life, is interconnected at many different levels, and this is a lesson we in the sciences should not forget.

DR. DONALD R. PROTHERO was Professor of Geology at Occidental College in Los Angeles, and Lecturer in Geobiology at the California Institute of Technology in Pasadena. He earned M.A., M.Phil., and Ph.D. degrees in geological sciences from Columbia University in 1982, and a B.A. in geology and biology (highest honors, Phi Beta Kappa) from the University of California, Riverside. He is currently the author, co-author, editor, or co-editor of 32 books and over 250 scientific papers, including five leading geology textbooks and five trade books as well as edited symposium volumes and other technical works. He is on the editorial board of Skeptic magazine, and in the past has served as an associate or technical editor for Geology, Paleobiology and Journal of Paleontology. He is a Fellow of the Geological Society of America, the Paleontological Society, and the Linnaean Society of London, and has also received fellowships from the Guggenheim Foundation and the National Science Foundation. He has served as the President and Vice President of the Pacific Section of SEPM (Society of Sedimentary Geology), and five years as the Program Chair for the Society of Vertebrate Paleontology. In 1991, he received the Schuchert Award of the Paleontological Society for the outstanding paleontologist under the age of 40. He has also been featured on several television documentaries, including episodes of Paleoworld (BBC), Prehistoric Monsters Revealed (History Channel), Entelodon and Hyaenodon (National Geographic Channel) and Walking with Prehistoric Beasts (BBC). His website is: www.donaldprothero.com. Check out Donald Prothero’s page at Shop Skeptic.