The Latest Episode of The Way of the Mister: Skepticism & Atheism

Can you be a good skeptic and believe in God? 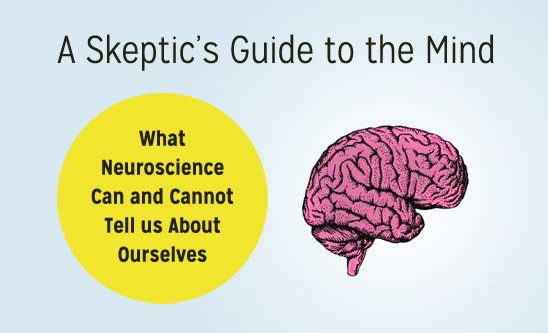 by Harriet Hall, M.D., the SkepDoc

In his first book, On Being Certain: Believing You Are Right Even When You’re Wrong, neurologist Robert Burton showed that our certainty that we are right has nothing to do with how right we are. He explained how brain mechanisms can make us feel even more confident about false beliefs than about true ones. Now, in a new book, A Skeptic’s Guide to the Mind: What Neuroscience Can and Cannot Tell Us About Ourselves, he investigates the larger question of how a brain creates a mind. There is no alternative to the scientific method for studying the physical world, but Burton thinks there are essential limitations to science’s ability to investigate conundrums like consciousness and free will. 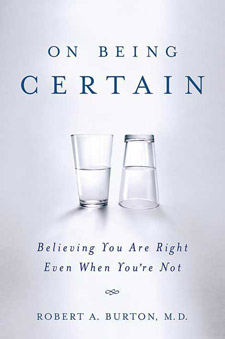 Brain scientists fall into error because, he says, “our brains possess involuntary mechanisms that make unbiased thought impossible yet create the illusion that we are rational creatures capable of fully understanding the mind created by these same mechanisms.” Burton has a bone to pick with neuroscientists. They are discovering fascinating information, but their interpretations often go beyond what the data can really tell us. They often draw questionable conclusions from imaging studies that could have other explanations.

There is a lot going on in our brains that we’re not aware of. Subconscious brain mechanisms are like a gigantic committee. Everything from your DNA to your past experiences to your political leanings to your emotions is given a vote, and only the consensus is passed on to your conscious awareness. If all the raw input to the committee were accessible to consciousness, it would be too much information and would hopelessly impair our ability to act. For the mind to function, mental sensations have to override contradictory evidence to create certainty and motivation.

The brain tries to make our experiences meaningful by tricks like re-ordering the temporal sequence of events. When the batter swings, he thinks he is seeing the ball and then reacting; but he initiates his swing before he could possibly be consciously aware of the ball’s trajectory.

Our minds are not truly individual and independent. Burton offers a non-woo-woo view of a “group mind” illustrated by exhibits from slime molds and locusts. We are subject to peer pressure and groupthink. Even the perception of visual illusions varies across cultures, and psychological studies may be misleading because 96% of behavioral science experiment subjects are from Western industrialized countries.

We have studied neurons because they are easier to study and are believed to be the basis of cognition. But glial cells are at least as numerous as neurons, and they may be vital to our understanding of the brain.

He questions some high-profile articles to show how good basic science has been used to advance unwarranted claims: “My goal isn’t to refute the observations but to question the degree of confidence in the conclusions.”

Mirror neurons have been offered as an explanation for empathy, but the evidence is not sufficient to infer that. Direct measurement of mirror neurons in humans has never been done, and the monkeys in which mirror neurons were first discovered—Macaques—show next to no empathy in their actions.

Burton also questions research into the “neural correlates of consciousness” by investigators such as Christof Koch, because the behavior of individual neurons can’t explain emergent properties with a higher level of complexity. In an fMRI study, a patient in a persistent vegetative state was asked to imagine herself walking through her house and then to imagine playing tennis. Different patterns were identified on the fMRI scans when she was asked to think about these two different activities. The researchers concluded that she was conscious and was responding to their commands. Burton offers another possible explanation: that some degree of unconscious cognition was occurring without any conscious awareness.

The brain mapping project is misguided. One researcher believes his research marks a turning point in human history, and that we will eventually be able to read our memories from our neural circuitry and preserve them after death. Burton is skeptical: “I cannot imagine a better example of faith-based magical thinking.”

As infants develop into adults, they lose 50% of their neurons. A pruning process creates a more efficient brain. When a new skill is being developed, the volume of relevant parts of the brain increases, but once the skill is learned, brain volume returns to normal. A 2007 article from the Royal Society of England criticized 25 years of research on brain size and behavior, saying that while correlation doesn’t demonstrate causation, that is how results are invariably interpreted.

fMRI studies can show increased blood flow to areas of the brain, but they can’t distinguish between psychological and physical causes. In Burton’s analogy, if the fMRI lit up when subjects imagined three-legged Martians surfing on a sea of concrete, that wouldn’t make the Martians real. Scan findings in patients with fibromyalgia don’t prove their pain is “real” but may only indicate expectation of pain. As Burton writes: “Neuroscientists must acknowledge that translations of scientific data into causal explanations about the mind are pure storytelling.”

In physics, the speed of light can be measured without any influence from personal biases. In contrast, scientific data about the mind is filtered through personal perceptions. Burton feels that current neuroscience is teetering on the brink of an era of excess that will not be viewed kindly by history. 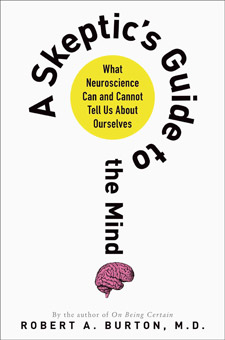 Instead of speculating about conscious “free will”, it would make more sense to focus on intention, which may be conscious or unconscious. Elegant studies have shown that brain activity demonstrates unconscious intention before conscious awareness of intent. Burton quotes the psychologist Daniel Wegner: “The experience of consciously willing a action is not a direct indication that the conscious thought has caused the action.”

Burton provides an overview of the latest research in neuroscience. He covers a wide variety of subjects, including out-of-body experiences, body image disorders (including people who want to have a limb amputated), feelings of causality, the alien hand syndrome, and the Dunning-Kruger effect where incompetent people not only fail to recognize their incompetence but believe they are more competent than those who are really competent (sometimes paraphrased as “being too stupid to know that they’re stupid”).

This is heady stuff. It challenges our preconceptions. It is packed with the results of intriguing scientific experiments that raise more questions than they answer. The committee in my brain passed on a strong “thumbs up” vote to my conscious mind.