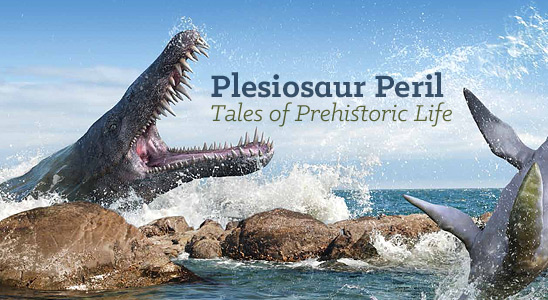 Get the 3rd Children’s storybook
by Daniel Loxton

We are pleased to announce Plesiosaur Peril, Daniel Loxton’s third and final children’s storybook in the science-informed series Tales of Prehistoric Life—the first of which was Ankylosaur Attack (2012 Canadian Children’s Book Centre Winner for “Best Books for Kids & Teens”).

A group of plesiosaurs—ocean-dwelling cousins of the dinosaurs—keeps safe by swimming in a family pod. But then one baby plesiosaur swims too far from its mother and attracts the attention of something very large and very hungry, and the struggle for survival is on. A unique blend of digital artwork and landscape photography illustrates this thrilling encounter.

“Another prehistoric predicament from the creators of Ankylosaur Attack (2011) and Pterosaur Trouble (2013), with similarly nongory but otherwise photorealistic illustrations … Go, Cryptoclidus!” —Kirkus Reviews 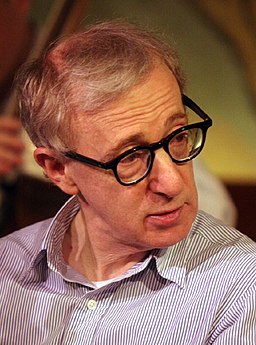 In this week’s eSkeptic, in the wake of passionate and polarized commentary following Dylan Farrow’s recent allegations that Woody Allen sexually abused her when she was 7 years old, social psychologist Dr. Carol Tavris discusses how the science of memory may help guide how we think about cases like this. Carol Tavris, Ph.D., is a coauthor, with Elliot Aronson, of Mistakes Were Made (But Not by Me): Why We Justify Foolish Beliefs, Bad Decisions, and Hurtful Acts. Tavris’ lecture at Caltech, based on the book, is available on DVD from Shop Skeptic.

Believe the Survivors or the Science?
What the science of memory can teach us
about the Dylan Farrow/Woody Allen case

Like many others, I read the passionate and polarized commentary that followed Dylan Farrow’s letter (February 1, 2014) accusing Woody Allen of having sexually abused her in the attic 21 years ago, when she was 7. As is always the case with sensational charges of child sexual abuse, most people leap to conclusions: “Of course he did it”; “he couldn’t possibly have done it.”

That kind of argument makes my heart sink. Believe the children in the Los Angeles McMartin preschool case, who claimed their teachers were molesting them in (nonexistent) underground tunnels and taking them on plane trips (on a preschool teacher’s salary?). Believe the children in New Jersey, who accused their daycare teacher Kelly Michaels of, among other things, licking peanut butter off children’s genitals, making the children drink her urine and eat her feces, and raping the children with knives, forks, and toys, although no adult noticed and no child had symptoms? Believe the women who, after years of therapy, hypnosis and “truth serum,” claimed that their fathers had raped them every day for 16 years only they forgot until now?

I was also dismayed to read claims by many of Dylan Farrow’s supporters that have long been scientifically disproved:

In research spanning 30 years, psychological scientists have demonstrated repeatedly what is wrong with these assumptions. Their goal is not to take sides, but to help prosecutors, judges, parents, teachers, and the rest of us to think more clearly about the issues—both to support children who have been molested and protect adults from false claims. Their research helped bring an end to the hysterical epidemic of daycare abuse and recovered-memory-therapy allegations, but not before hundreds of innocent daycare workers had been convicted and imprisoned and thousands of families torn apart. Some daycare workers are still in prison and some are “free” but burdened by the label of lifetime sexual offender. These miscarriages of justice were the result of mindlessly “believing the children,” something that can be said only by adults who don’t have children, know children or never were children themselves.

Consider “lying.” This is an adult term, referring to someone who knowingly and intentionally tells a falsehood. But a child or adult does not have to be lying to be wrong. Children, like adults, make up stuff, sometimes for attention, sometimes to avoid punishment, sometimes for reasons they don’t know. I told my fifth-grade teacher I missed school the previous day because I’d gone to the racetrack. A child I know told her mother that her first-grade teacher had hit her; shocked, the mother removed the child from the classroom and ended a close friendship with the teacher over the claim. Four years later, the child tearfully admitted she’d made it up.

More to the point: children, like adults, misremember, and their certainty that their memory is accurate—no matter how vivid and emotional—is no indication that it is. I have a powerful memory of my beloved father reading James Thurber’s The Wonderful O to me when I was 8, but that book was published when I was 13—a year after my father’s death. Memories can be distorted and confabulated both through the normal failings of memory and through the manipulations of adult questions, as happened repeatedly in the daycare cases. In a study of schoolchildren who were asked for recollections of an actual sniper incident at their school, many of those who had been absent from school that day reported memories of hearing shots, seeing someone lying on the ground, and other details they could not possibly have experienced directly. They weren’t “lying”—they were misremembering, as we all do. The emotion and trauma of the experience caused them to insert themselves into the event.

In her TEDGlobal talk in 2013, the eminent memory scientist Elizabeth Loftus said that memory was less like a recording device and “more like a Wikipedia page—you can go in there and change it, but so can other people.” She and other researchers have implanted false memories even of bizarre events—such as, she says, “being attacked by a vicious animal, nearly drowning and being rescued by a lifeguard, or witnessing demonic possession.” False memories can be implanted with suggestions, misinformation, hypnosis, and even doctored photographs. She calls these “rich false memories,” because people truly believe they are accurate. They “recall” them with confidence, adding details as they go and feeling deep emotion, as I felt about my memory of my father reading The Wonderful O. Rich false memories can persist for years. That’s why Dylan Farrow doesn’t have to be “lying” when she reported her version of events. But without independent corroboration, we don’t know.

Likewise, perpetrators are not necessarily lying when they claim innocence: many are self-justifying, unable and unwilling to accept evidence of the harm or cruelty they caused another. Doesn’t every couple—or family, or politician—understand this? “You betrayed me,” she says. “You started it,” he replies. He isn’t lying; he really believes his actions were not as devastating as she does. Woody Allen could be self-justifying rather than lying. So could Mia Farrow.

When an emotionally compelling story hits the news, it’s tempting for all of us to jump to conclusions. Many people are inclined to believe, as I first did in the McMartin case, that “where there’s smoke, there’s fire.” Wrong: sometimes there’s just smoke—and mirrors. The problem, as studies of cognitive dissonance show, is that as soon as we take sides, the brain sees to it that we will justify and solidify our position by seeking only the information that confirms it, and deny, ignore or minimize evidence that we could be wrong.

That is the reason for the vehemence with which many of Farrow’s supporters are shouting down the opposition. (The title of a research paper captured this phenomenon perfectly: “When in Doubt, Shout.”) Given a choice of whom to believe, they say, we must always side with the accuser in a rape or molestation case; otherwise we are supporting the patriarchal “rape culture.” As Bady writes, “if you are presuming his innocence by presuming her mendacity, you are rape cultured.” Anyone who asks skeptical questions of Dylan Farrow’s story is a pedophile or a sexist who is abetting the abuse of children and women. That kind of self-righteous certainty shuts down thoughtful inquiry. It does not help the cause of feminism or justice.

How, then, should we think about Dylan Farrow’s allegations? It’s relevant that they occurred during a bitter custody dispute, when Mia Farrow’s understandable rage at Allen over his affair with Soon Yi was going at full blast. We might ask why Dylan is making her story public now. We might wonder whether she has been influenced by recovered-memory therapists or, as her brother Moses writes, by an angry and vengeful mother. We would want to take into account that this family remains bitterly divided. Most of all, we have to accept the most difficult lesson of critical thinking: tolerating uncertainty.

What we should not do, as my coauthor Elliot Aronson has said, is “sacrifice our skepticism on the altar of outrage.” Outrage is good when it leads to constructive, mindful efforts to promote justice—for innocent children and for innocent adults. But outrage without skepticism and science is a recipe for hysteria and witch hunts.

In this episode of MonsterTalk, Blake and Karen talk about how skeptics evaluate the Gary Indiana Demon case.

Tim Flannery, on Vimeo On Demand
A Natural History of the Planet 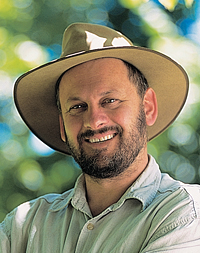 Tim Flannery is one of the world’s most influential scientists. In Here on Earth Flannery presents a captivating and dramatic narrative about the origins of life and the history of our planet. Beginning at the moment of creation with the Big Bang, Flannery explores the evolution of Earth from a galactic cloud of dust and gas to a planet with a metallic core and early signs of life within a billion years of being created. He describes the formation of the Earth’s crust and atmosphere, as well as the transformation of the planet’s oceans from toxic brews of metals to life-sustaining bodies covering 70 percent of the planet’s surface… Read more… 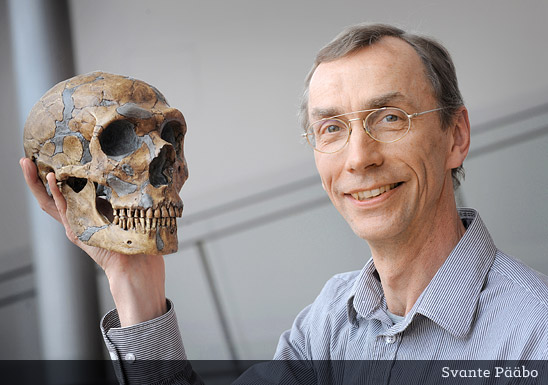 SVANTE PÄÄBO IS THE FOUNDER of the field of ancient DNA and is the director of the department of genetics at the Max Planck Institute for Evolutionary Anthropology in Leipzig. In Neanderthal Man he tells the story of his mission to answer the question of what we can learn from the genes of our closest evolutionary relative, culminating in his sequencing of the Neanderthal genome in 2009. We learn that Neanderthal genes offer a unique window into the lives of our hominin relatives and may hold the key to unlocking the mystery of why humans survived while Neanderthals went extinct. Drawing on genetic and fossil clues, Pääbo explores what is known about the origin of modern humans and their relationship to the Neanderthals and describes the fierce debate surrounding the nature of the two species’ interactions. A book signing will follow the lecture.
Order Neanderthal Man from Amazon.