Plato at the Googleplex:
Why Philosophy Won’t Go Away

Stephen Hawking said philosophy is dead. Plato would disagree, says the acclaimed philosopher and novelist Rebecca Goldstein, who provides a dazzlingly original plunge into the drama of philosophy, revealing its hidden role in today’s debates on religion, morality, politics, and science. Philosophy is not obsolete, and the ancient questions that Plato asked are still relevant in the age of cosmology and neuroscience, crowd-sourcing and cable news. Imagine that Plato came to life in the 21st century and embarked on a multicity speaking tour. How would he handle the host of a cable news program who denies there can be morality without religion? How would he mediate a debate between a Freudian psychoanalyst and a tiger mom on how to raise the perfect child? How would he answer a neuroscientist who, about to scan Plato’s brain, argues that science has definitively answered the questions of free will and moral agency? What would Plato make of Google, and of the idea that knowledge can be crowd-sourced rather than reasoned out by experts? With a philosopher’s depth and a novelist’s imagination and wit, Goldstein probes the deepest issues confronting us by allowing us to eavesdrop on Plato as he takes on the modern world. A book signing will follow the lecture.
Order Plato at the Googleplex from Amazon.

TICKETS: First come, first served at the door. Seating is limited. $10 for Skeptics Society members and the JPL/Caltech community, $15 for nonmembers. Your admission fee is a donation that pays for our lecture expenses. 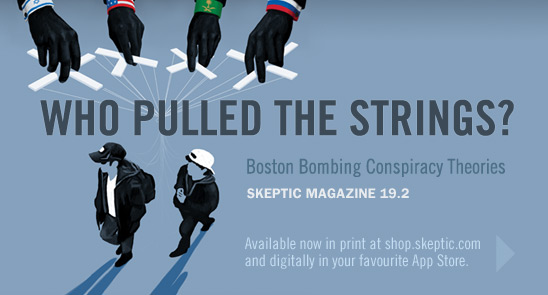 The latest issue is available now in print and digital formats. Order a hard copy or download the digital version using the Skeptic Magazine App for iOS, Android, BlackBerry PlayBook, Kindle Fire HD, Mac, PC, and Windows 8 devices. This issue won’t likely hit newsstands for another week or so and current subscribers should receive it by the end of June.

Buy the single back issue
in print

Efforts have been made over the past two decades to reduce the world’s active nuclear stockpiles. Can we get to “nuclear zero”? In Michael Shermer’s June 2014 ‘Skeptic’ column for Scientific American, he asks whether deterrence prohibits the total abolishment of nuclear weapons?

The Mongolian Death Worm—its name conjures up images of fantastic beasts like the sand worms in Dune or the creatures from the film Tremors, but the actual legends are even stranger. We discuss the legends and facts behind this cryptid with the official zoologist for the Center for Fortean Zoology, Richard Freeman.

NEW ON SKEPTICBLOG.ORG
The Profound Awfulness of Discovery’s
Russian Yeti: The Killer Lives

Daniel Loxton reflects on the importance of good editors in the life of a writer, and wishes a happy retirement to one of the very best.

The Best of rbutr

rbutr keeps a finger on the pulse of contentious debate happening on the Internet. If people are disagreeing about something on the web, then rbutr probably knows about it. And because of the unique way rbutr catalogues these debated issues, it gets the full story every time—not just a biased perspective from one source with an agenda. Now, rbutr wants to share this invaluable information with you.

Introducing The Best of rbutr—a free email newsletter, featuring the most interesting debates on the internet.

Read The Best of rbutr