MARK YOUR CALENDAR! The Skeptics Society is pleased to announce another season of our Distinguished Science Lecture Series at Caltech. All events begin on a Sunday at 2pm in Baxter Lecture Hall on the Caltech campus, except for Steven Pinker’s lecture, which happens on a Saturday (October 4). Lecture events feature a Q&A period after the talk, and a book signing by the author. Also, lecture-goers are invited to meet and talk to the speaker and socialize with fellow skeptics over dinner and libations at Burger Continental in Pasadena. Tickets are sold first come, first served, at the door. Seating is limited. $10 for Skeptics Society members and the JPL/Caltech community, $15 for nonmembers. Your admission fee is a donation that pays for our lecture expenses. First up… 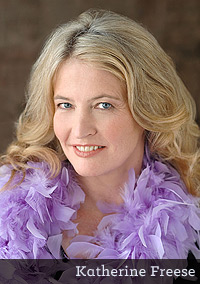 THE ORDINARY ATOMS that make up the known universe constitute only 5% of all matter and energy in the cosmos. The rest is known as dark matter and dark energy, because their precise identities are unknown. The Cosmic Cocktail is the inside story of the epic quest to solve one of the most compelling enigmas of modern science—what is the universe made of?—told by one of today’s foremost pioneers in the study of dark matter, acclaimed University of Michigan theoretical physicist Katherine Freese. Theorists contend that dark matter consists of fundamental particles known as WIMPs, or weakly interacting massive particles. Billions of them pass through our bodies every second without us even realizing it, yet their gravitational pull is capable of whirling stars and gas at breakneck speeds around the centers of galaxies, and bending light from distant bright objects. Dr. Freese describes the larger-than-life characters and clashing personalities behind the race to identify these elusive particles. Order The Cosmic Cocktail from Amazon. A book signing will follow the lecture. 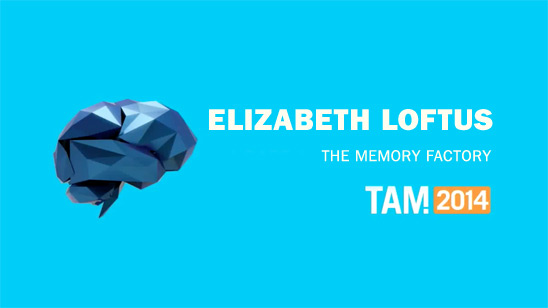 For those of you who missed The Amazing Meeting 2014, we present another lecture from that event, by Dr. Elizabeth Loftus, an expert on memory in the field of cognitive psychology.

One of the biggest myths in the history of psychology is that memory is like a video tape that can be played back for everyone to see what “really happened.” In this lecture, Dr. Elizabeth Loftus, one of the world’s leading experts on memory, shows how we all edit our memories from the moment they are formed to the last time we recall them. That editing process is based on a number of emotional, psychological, and social factors that shape our memories. 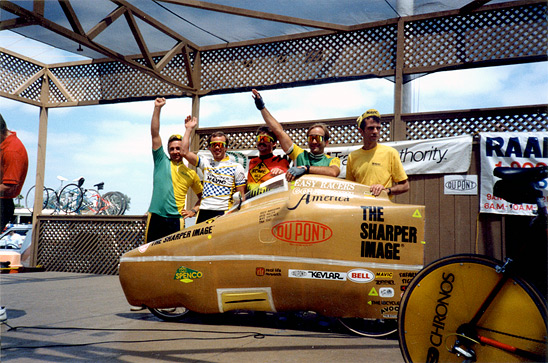 Michael Shermer (second from the right) with his teammates in the 4-man relay team that rode this fully faired recumbent bicycle across America in 1989. Although much faster than a normal upright bicycle on the flats and downhills, recumbents are slower on climbs and do not turn or maneuver as well in turns and traffic.

In this week’s eSkeptic, Michael Shermer reviews Bicycle Design: An Illustrated History by Tony Hadland and Hans-Erhard Lessing. This review was originally published in the Wall Street Journal on July 5, 2014.

Path dependency is an economic concept to describe what happens when a technology becomes stuck in a market pathway out of historical momentum, especially when the transactions costs of changing course are too high. The QWERTY keyboard is the most popular example of the phenomenon. As the standard narrative has it, QWERTY got a head start in the late 19th century over other keyboard arrangements that were vastly superior and so now we are stuck with this clunky keyboard system because of historical lock in.

Baloney. The QWERTY keyboard may not be the best of all possible letter key arrangements, but it has consistently held up against all would-be competitors because it is good enough to get the job done compared to costs of changing technologies for minuscule margins of improvement. What happens in most technologies is that the earliest innovators make most of the significant design features, which later generations tinker with and modify for improvements, and change happens mostly for convenience or efficiency factors, and not because of initial serious design flaws.

The bicycle is a case study in how technologies evolve, evidence for which is in abundant supply in Tony Hadland’s and Hans-Erhard Lessing’s encyclopedic history of bicycle design. This marvelous book features over 300 illustrations culled from many sources, most intriguingly from patent records. Having lived through what I thought was a major revolution in cycling technology in the 1980s when I was competing in the 3000-mile nonstop transcontinental bicycle Race Across America, I discovered in Bicycle Design that most of that decade’s innovations (as well as those in the decades hence), were invented, designed, and in many cases patented by cycling innovators decades or even a century before. 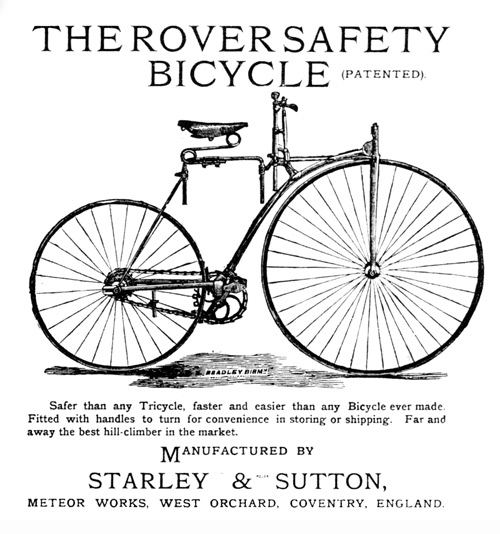 An early upright bicycle with the central features in place.

Today’s Tour de France professionals are riding machines whose fundamental design can be seen in Starley and Sutton’s 1885 Rover Safety bike, in the 1892 Sunbeam Special Light Road Racer, in Raleigh’s 1939 Carlton Flyer, and others: the diamond shaped frame with a top tube between the seat and handlebars, a head tube holding the handlebars and the fork for the front wheel, a down tube between the head tube and the bottom bracket for the pedals and drive train, and a seat tube between the seat and bottom bracket. The wheels are equal in size and the cyclist sits upright and propels the bike forward by means of pedaling a chain ring around which a chain turns a set of cogs attached to the rear wheel. Steering is done by controlling the front wheel and brakes are affixed to both wheel rims with controls on the handlebars.

The diamond frame design with an upright pedaling cyclist is not a quirk of history, nor is it a suboptimal design foisted upon us by path dependency. The design works because of human anatomy. In terms of propelling a body forward under human power, no one has come up with a better design for all terrains in a century of innovation. The closest thing to a revolutionary re-design is the recumbent bike with the cyclist positioned in a supine (horizontal) position. Recumbents are advantageous on flat surfaces, but they also have distinct disadvantages on climbs and rough terrain—I know because I rode the recumbent Gold Rush across America in 1989. In any case, Bicycle Design features illustrations (and patent numbers) for recumbents that date back to the 1890s, so it’s had over a century to displace its primary competitor. 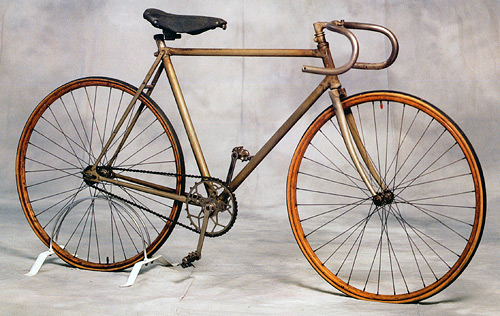 What about bicycle components, accessories, and materials? When Greg LeMond became the first (and still only) American to win the Tour de France in the 1980s, we all thought he and his bike designers had invented, for example, clipless pedals, which we all adopted as new and revolutionary. But Bicycle Design features an illustration for patent No. 550,409 dated Nov. 26, 1895 for a clipless pedal system invented by Charles M. Hanson that looks every bit as efficient as what the pros ride today. What about the comfortable padded and yet efficient saddles people now ride? Hadland and Lessing include designs and patents for padded and spring-suspended saddles dating back to the late 19th century. How about those shock absorber and suspension systems featured on modern mountain bikes? See the 1869 French patent for a twin-fork front suspension system using leaf springs, or U.S. patent No. 97,683 for four forms of front wheel suspension invented by René Oliver. Spokes? Designs for compression spoke wheels were granted in 1867, 1868, and 1869 to seven different inventors. Similarly for derailleurs that shift gears: patents were first granted in 1868, with numerous multi-speed patents awarded in the 1890s. Disk brakes used by mountain bikers were patented a century ago. 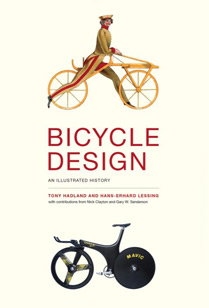 Of course, as Hadland and Lessing point out, “just because something was patented doesn’t mean that it was widely adopted or even that it was put into production. It does, however, show that a problem and a solution were understood by someone at a particular time and in a particular place.” After that, numerous factors come into play that determine whether or not it becomes a commercial success: quality, efficiency, cost, marketing, but almost never path dependency. 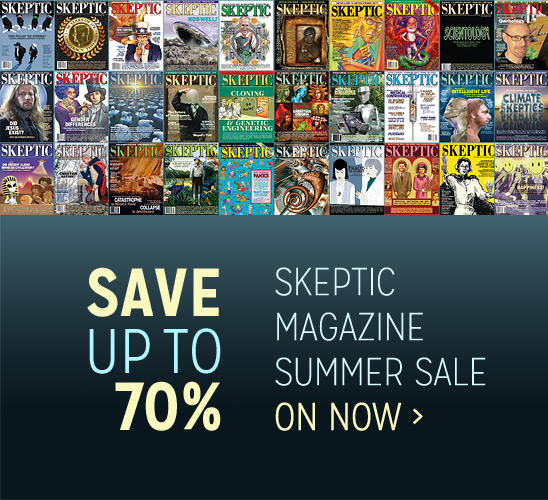 The Best Time to Buy Skeptic!
Save Now Through September 21, 2014

We are making space in our warehouse by clearing out our surplus inventory of Skeptic magazine back issues at amazing discounts. Order them from our online store now through Sunday, September 21, 2014, and save up to 70%* off the regular $6 back issue price! There has never been a better time to buy Skeptic magazine. Shop now and save!

Shop now and save!