A History of Life’s Vital Essence (Part 1): Fire and Gods

Mike McRae provides a glimpse into the history of two competing systems of biology: life as complex chemistry, and the abandoned theory of vitalism. (Part 1 of 3)

Mike McRae provides a glimpse into the history of two competing systems of biology: life as complex chemistry, and the abandoned theory of vitalism.

The Odds Must Be Crazy?

Daniel Loxton shares a video from The Odds Must Be Crazy about a coincidence he experienced at a skeptics convention in 2014.

What the Heck is a Biostratigrapher?

Listen as a quick and easy 10-minute radio interview explains how fossils help scientists to reconstruct the geological history of the Earth.

The Latest Episode of Mr. Deity: Mr Deity and the Donations

Have you ever questioned your faith, or worried about what life would be like without it, or do you know someone who has? Have you ever wrestled with issues of how to replace religious practices and ideas with secular ones? In this week’s eSkeptic, Donald Prothero reviews Living the Secular Life: New Answers to Old Questions: a book by Phil Zuckerman that addresses these topics.

Dr. Donald R. Prothero earned MA, M.Phil, and PhD degrees in geological sciences from Columbia University, and a BA in geology and biology from the University of California, Riverside. He is currently the author, co-author, editor, or co-editor of 32 books and over 250 scientific papers, including five leading geology textbooks and five trade books as well as edited symposium volumes and other technical works. He is on the editorial board of Skeptic magazine, and in the past has served as an associate or technical editor for Geology, Paleobiology and Journal of Paleontology. He was Professor of Geology at Occidental College in Los Angeles, and Lecturer in Geobiology at the California Institute of Technology in Pasadena. He has also been featured on several television documentaries, including episodes of Paleoworld (BBC), Prehistoric Monsters Revealed (History Channel), Entelodon and Hyaenodon (National Geographic Channel) and Walking with Prehistoric Beasts (BBC).

The Times, They are a Changin’

Last month, a new Pew survey was released that showed that the “nones” or “religiously unaffiliated” in America have become the second largest religious group in America (22.8% of the surveyed population, jumping up from only 16% in 2007). They were outnumbered only slightly by Evangelical Protestants at 25.8%. “Nones” even are more numerous than Catholics, and the numbers of mainstream Protestants is plummeting. “Nones” are ten time more numerous than Jews, Buddhists, Muslims, Hindus, and other faiths (most are only 2–3% or less). Not only are the numbers of “nones” increasing rapidly, but nearly every religious group in America is declining just as fast, including a 0.9% drop even in the dominant Evangelicals. More importantly, the largest percentage increase in unaffiliated people is among the younger generations, especially the Millennials (those born between 1981–2000), who are becoming increasingly non-religious (36–44% or higher). Even more striking, the usual trends of people getting more conservative and religious as they age is not holding true with the Millennials, since the older Millennials show just as high a rate of lack of religiosity as do younger ones. If this is true, then religion may be on a permanent downward trend in this country, just as has already occurred in largely secular countries of the developed world in Europe and Asia.

Naturally, the blowhards in the right-wing political/religious community bemoaned this news, although it has been developing for a long time and is really not news to those of us who have been paying attention. Bill O’Reilly of Fox News blamed it on rap music. Former Pennsylvania Senator and two-time presidential candidate Rick Santorum blamed it on the lack of anti-abortion zealots running for president. Rush Limbaugh (who is losing channels and sponsorships right and left) blamed it on gay marriage. Pat Buchanan blamed it on the Supreme Court, the liberal elites in the media, and the counterculture of the 1960s (even though the Boomers are mostly religious). Ken Ham of the Creation Museum and Answers in Genesis Ministry, blamed it on the public schools as “churches of atheism” and the lack of early indoctrination of children. Similar responses could be heard from Pat Robertson and other evangelical ministers.

As a number of people have pointed out, however, these simplistic cartoon villains of religion need to be replaced with more realistic causes, backed up the poll numbers and demographic trends. The Pew Foundation is set to release another report soon on their analysis of the reasons, but already scholars have pointed to several plausible causes. Professor of Secular Studies Phil Zuckerman of Pitzer College in Claremont, California, has written several books on the religious changes in the United States (Faith No More, Society without God). He just released his newest book on the topic, called Living the Secular Life: New Answers to Old Questions. Zuckerman and most of the analysts point to several trends that have probably contributed (although it’s hard to decide which ones are most important):

The main focus of Living the Secular Life, however, is a follow-up to Zuckerman’s earlier books about secularism—how do American secularists live? In each chapter, he deals with an important personal or cultural issue that is usually defined in religious terms, and shows how American secularists do just fine without religion. These include the common questions, “How can you be moral without God”? (actually, secularists tend to be more moral than religious people). How do you raise kids without church? Where do you go for community without your church group? How do you deal with life’s difficulties and with death without the hope of religious faith? In each chapter, Zuckerman approaches the problem by giving examples of real people and how they address these issues, then shows that religion is not required to deal with any of these issues—just as the vast majority of secular people in most of the northern European countries have long ago concluded. 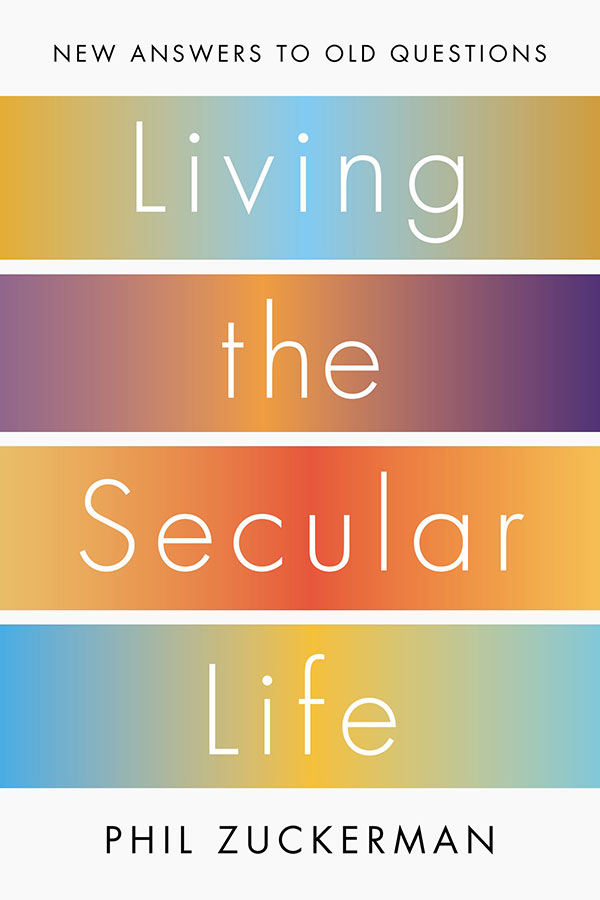 Order the book from Amazon
Watch the lecture online

Zuckerman’s book is an excellent read for anyone who is questioning their faith and worried about what life would be like without it, or for secularists who are wrestling with issues of how to replace religious practices and ideas with secular ones. When Zuckerman gave a talk about his book for the Skeptics Society at Caltech on April 19, 2015, he told a story about how much life has changed in northern Europe. In most cities, huge cathedrals and other religious buildings no longer have any congregations, but have been sold and are now used as meeting houses, public places, and even local pubs and taverns. They have become cathedrals of secularism.

I’m not expecting this to happen in the U.S. next week, but it can happen very fast. The change occurred in Europe over only two generations, mostly before the internet gave it any help—thanks to cradle-to-grave social safety nets provided by their governments, which remove the fear that drives religious belief. In Quebec in the 1960s, the Catholic hierarchy once ruled the entire province, but a series of elections of secular governments led it to become the most progressive and least religious province in all of Canada in a single generation. John Lennon imagined no religion. Now the rest of the country is catching up.