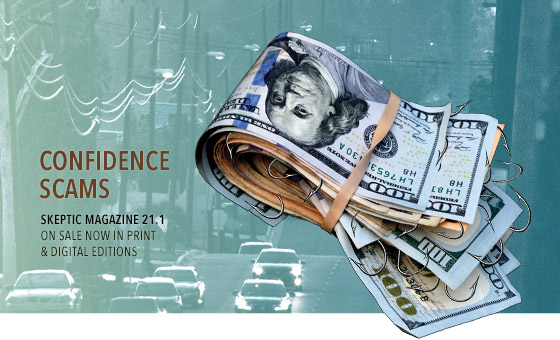 Confidence Scams: Who Does Them, and Why We Fall for Them

The latest issue of Skeptic magazine (21.1), CONFIDENCE SCAMS, features an excerpt from Maria Konnikova’s The Confidence Game: Why We Fall for It … Every Time. The Washington Post calls the book “An unnerving manual for conning and getting conned.” And Vice calls it “A gripping examination of exactly why so many of us are such suckers for schemes that shut down our saner instincts.”

Get the digital edition instantly from PocketMags.com, or via the Skeptic Magazine App for iOS, Android, BlackBerry PlayBook, Kindle Fire HD, Mac, PC, and Windows 8 devices. You can also pre-order the print edition from Shop Skeptic. The print edition won’t likely hit newsstands for another week or two. 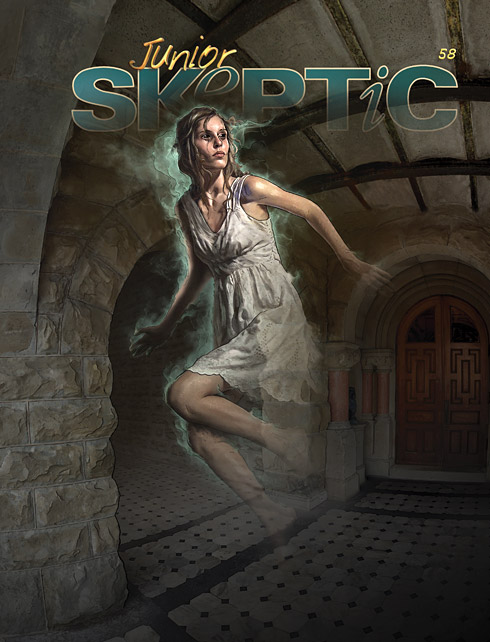 Get this issue of Junior Skeptic bound within issue 21.1 of Skeptic Magazine

In this issue we’ll summon our courage, light a candle, and venture inside the ancient horror of haunted houses. Imagine walking dark hallways, peering into abandoned rooms. We strain to recognize unfamiliar shapes in the shadows. A cold draft stirs the cobwebs; outside, wind moans through the trees. We climb creaking stairs up into the unknown. Ahead of us, we — wait, did you hear something? Were those…footsteps? Our skin prickles with fear and tension. Breathless, trembling, we call into the darkness, “Is somebody there?” On Thursday, February 11, 2016, the National Science Foundation made a thrilling announcement: gravitational waves—first predicted by Einstein as part of his general theory of relativity in 1916—had been detected for the first time. This incredible development made front page news and was reported by outlets across the country. How was such a remarkable discovery, a long hundred years after Einstein’s prediction, made possible?

In this Science Salon based on her new book, Black Hole Blues and Other Songs from Outer Space, astrophysicist and award-winning writer Dr. Janna Levin tells the epic story of the scientific campaign to record these waves—the holy grail of modern cosmology. A handful of physicists, led by Kip Thorne and Ronald Drever at Caltech and Rainer Weiss at MIT, have been working nearly their entire careers to conceive of, design, and build an instrument sensitive enough to detect gravitational waves. Levin delves into the lives and fates of the scientists, painting compelling portraits of these very human visionaries. She journeys from Los Angeles to Boston, to the LIGO interferometers in Hanford, Washington and Livingston, Louisiana, to the labs, offices, and observatories where the work in this great quest has painstakingly unfolded over the past five decades. Her account of the personalities, surprises, setbacks, and successes is a compelling and intimate portrait of the people and processes of modern science.

Order Black Hole Blues and Other Songs from Outer Space from Amazon.

In this episode of MonsterTalk, paleontologist Dr. Darren Naish (@TetZoo) returns to discuss his newest book, an overview of the field of cryptozoology, titled Hunting Monsters: Cryptozoology and the Reality Behind the Myths. 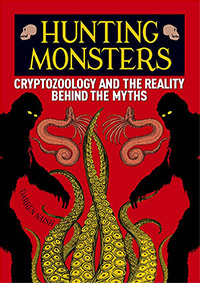