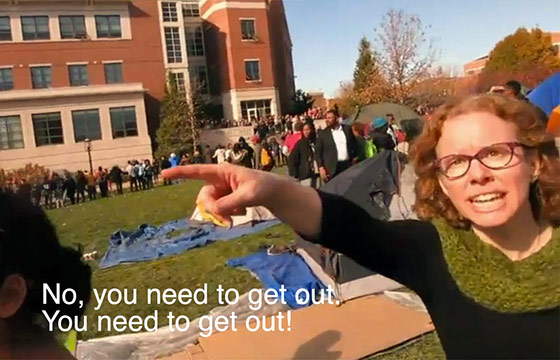 ABOVE: Melissa Click, a University of Missouri professor who teaches communication and journalism, was caught on tape threatening a journalist for covering a campus protest. She was subsequently fired for this and other such incidents she incited.

Is freedom of speech harmful for college students? Why is this question even being asked? In this week’s eSkeptic, in light of recent eruptions of student protests at numerous American colleges and universities, Michael Shermer discusses the notions of trigger warnings, microagressions, the importance of political viewpoint diversity and freedom of speech.

The French political journalist and supporter of the Royalist cause in the French Revolution, Jacques Mallet du Pan, famously summarized what often happens to extremists: “the Revolution devours its children.” I was thinking about this idiom—and its doppelgänger “what goes around comes around”—while writing a lecture for a talk I was invited to give at my alma mater California State University, Fullerton on the topic: “Is freedom of speech harmful for college students?” The short answer is an unflinching and unequivocal “No.”

Why is this question even being asked? When I was in college free speech was the sine qua non of the academy. It is what tenure was designed to protect! The answer may be found in the recent eruptions of student protests at numerous American colleges and universities, including Amherst, Brandeis, Brown, Claremont McKenna, Oberlin, Occidental, Princeton, Rutgers, University of California, University of Missouri, Williams, Yale, and others. Most of these paroxysms were under the guise of protecting students from allegedly offensive speech and disagreeable ideas—defined differently by different interest groups—with demands for everything from trigger warnings and safe spaces to microaggressions and speaker disinvitations. 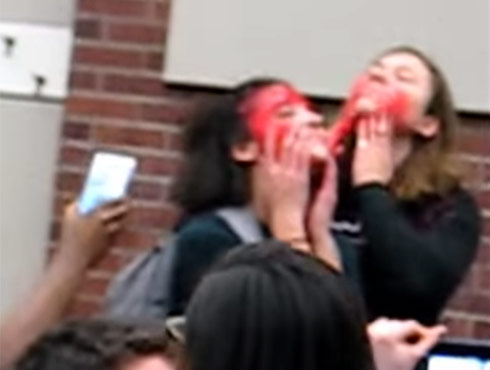 Students at Rutgers University protest a talk by Milo Yiannopoulos by smearing red on their faces and shouting “hate” when he challenged them to hear other points of view.

Trigger warnings are supposed to be issued to students before readings, classroom lectures, film screenings, or public speeches on such topics as sex, addiction, bullying, suicide, eating disorders, and the like, involving such supposed prejudices as ableism, homophobia, sizeism, slut shaming, transphobia, victim-blaming, and who-knows-what-else, thereby infantilizing students instead of preparing them for the real world where they most assuredly will not be so shielded. At Oberlin College, for example, students leveled accusations against the administration of imperialism, white supremacy, capitalism, and the ne plus ultra in gender politics, cissexist heteropatriarchy, the enforcement of “gender binary and gender essentialism” against those who are “gender variant (non-binary) and trans identities.” The number of such categories has expanded into an alphabet string, LGBTQIA, or lesbian, gay, bisexual, trans, queer/questioning, intersex, asexual and any other underrepresented sexual, gender, and/or romantic identities.1 This is not your parents’ protest against Victorian sexual mores, and the list of demands by Oberlin students would be unrecognizable to even the most radical 60’s hippies:

The most audacious demand was “an $8.20/hour stipend for black student leaders who are organizing protest efforts.” These students wanted to be paid for protesting!