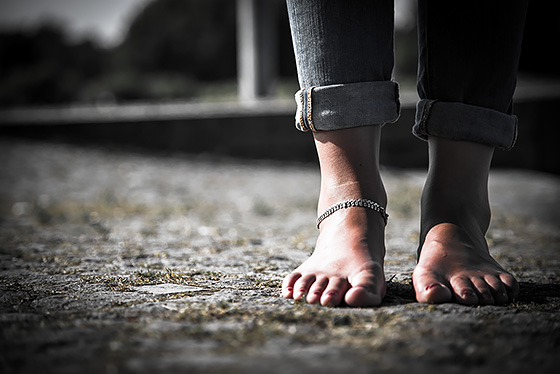 Could it be that shoes are the world’s most dangerous invention and the cause of health problems ranging from autoimmune diseases to premature aging? In this week’s eSkeptic, Harriet Hall, M.D. examines the claims of “grounding” or “earthing” — the idea that shoes are the most destructive invention ever and that maintaining health requires direct contact with the earth. This article appeared in Skeptic magazine 17.4 (2012). Read Harriet Hall’s bio at the end of this article.

There is a website that reveals “The world’s most dangerous invention.” Care to speculate what that invention might be? I might have guessed nuclear weapons. Others have incriminated guns, cigarettes, genetic engineering, religion, The Web, The Large Hadron Collider, and automobiles. But this website was not talking about any of those, but about a far more destructive invention. Would you believe…shoes?

Watch out for those malicious moccasins, horrific high heels, fiendish flip-flops, beastly boots, and sinister slippers! They’re all out to get you. Not just shoes. Anything that comes between us and the bare earth: houses, clothes, tent floors, pavements, doormats, cars, skis, and so on.

It’s called “grounding” or “earthing”— the idea that maintaining health requires direct contact with the earth. Shoes are the most destructive invention ever, we are told, because they allegedly cause inflammation and autoimmune diseases, circadian rhythm disruptions, hormonal disorders, cortisol disorders, heart rate variability problems, arthritis, herpes, hepatitis, insomnia, chronic pain, exhaustion, stress, anxiety, premature aging…pretty much anything that might ail you. A one-cause-of-all-disease explanation invokes inflammation as the culprit. Grounding is supposedly the best defense against inflammation and aging; it represents a whole new treatment paradigm. Among many other benefits, grounding also “promotes calmness in the body by cooling down the nervous system,” thins the blood, eliminates jet lag, and protects the body against potentially health-disturbing environmental electromagnetic fields.

A book expounds these concepts: “Earthing: The most important health discovery ever?” by Clinton Ober, Stephen Sinatra MD, and Martin Zucker, with a foreword by James Oschman Ph.D. Who are these people? Ober, the inventor of earthing, is a layman from the cable TV industry. Of course. Dr. Sinatra is a cardiologist who encouraged Ober, who specializes in so-called “integrative medicine” (which integrates superstition with science) and is a “certified bioenergetic psychotherapist.” Naturally. Zucker is a writer. Oschman is a notorious proponent of energy medicine who believes there is a scientific basis for it; most reputable scientists disagree. […] For those who could not make it to Pasadena, California for the Science Salon with physicist and jazz saxophonist Dr. Stephon Alexander, we have made a video recording of the event available to you.

Watch the Salon for free