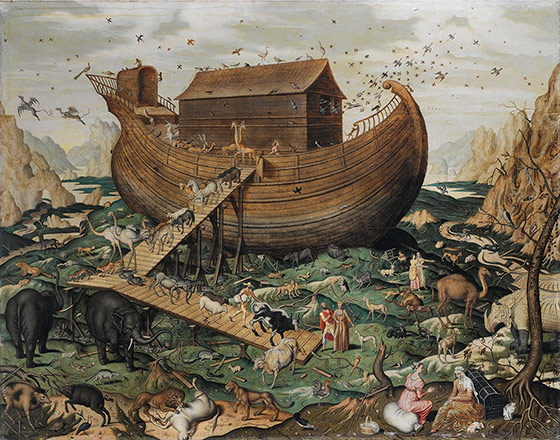 Should the Noah’s Ark story be taken literally?

Readers of Skeptic would probably react with shock that such a question should even be asked in these pages. “You’ve got to be kidding!” might be an appropriate response. For us, today, yes, it is something of a small joke even to pose such a question. Yet, as we all know, there are those who would answer with a resounding “YES!” These are the fundamentalists, Biblical literalists, and creationists. If it is our goal at the Skeptics Society, as noted in our statement of purpose (in the words of Baruch Spinoza) “not to ridicule, not to bewail, not to scorn human actions, but to understand them,” then we must ask this question from a historical point of view.

It may have been the intention of the original authors to convince their readers that these stories are true, in the sense we use the word today. But this in no way means that we should interpret them literally, any more than we would today paint wild animals on cave walls and assume the purpose of such an activity would be the same as it was for Cro-Magnon humans so long ago. Likewise, it would be ahistorical of us to assume these figures are “art” by our usage of the word. Historians know how dangerous it can be to apply modern standards and definitions to historical people, places, and things. Similarly, skeptics know how misleading it can be to adopt historical interpretations of longgone centuries to the modern world. We have, after all, learned a few things about nature in the past 3,500 years!

Those who do take the flood story literally, then, believe they should because they assume that people did back then. Our biblical ancestors may have needed such literal interpretations. Creationists and the like need them today because they are, in this sense, ahistorical. If the Bible contains moral homilies relevant for today, then why not take the rest of it at face value? The argument makes no sense from a modern perspective, but then these folks are living in the past—literally! — Executive Editor

This article appeared in Skeptic magazine 2.3 (1994). Read Gerald A. Larue’s bio at the end of this article.

Flood Myths and Sunken Arks — Who needs to believe in Noah’s Ark and why?

by Gerald A. Larue

Questioning the validity of the biblical flood story rests on the findings of a number of different but related fields, including archaeology, the historical-literary analysis of the Bible, and geology, not to mention good old common sense. It is to these, instead of faith, to which we turn for a skeptical analysis of the source and meaning of the flood story—for those who came before, and for us.

Archaeological excavation has produced tablets containing the oldest known versions of the Near Eastern flood story that, since they pre-date the Noah story, shed some light on the origins of this all-important myth. In the third millennium B.C.E., in a Sumerian tale, the flood hero is a priest-king named Ziusudra. From the fragmented text we learn that he built a boat and that after the flood he made animal sacrifices to the gods of Sumer.

A more detailed flood myth was included in the Babylonian story (second millennium B.C.E.) of a legendary King of Uruk named Gilgamesh, who learned of the flood from an ancestor named Utnapishtim. Warned by the Babylonian earth-god Ea that the gods were about to destroy all life by a flood, Utnapishtim was instructed to build an ark in the form of a cube, 120 cubits (180 feet) in length, breadth, and depth, with seven floors each divided into nine compartments, and to take aboard one pair of each living creature. After the flood, because Utnapishtim saved the “seed of life,” he was granted immortality. Motifs in the Babylonian account are echoed later in the Noah story:

The Gilgamesh epic circulated for centuries throughout the Near East and was known in Palestine before the coming of the Hebrews. D. G. Wiseman noted that a fragment of the text was found in the 14th-century B.C.E. level during the excavation of Megiddo, Israel. Literary comparisons make it clear that the biblical flood stories are borrowed from older versions of the tale.

Archaeological researchers have suggested that the Near Eastern flood myth may have its origin in the actual flooding by the Tigris and Euphrates rivers. During the excavation of ‘al Ubaid, Sir Leonard Woolley found a deep level of river silt covering habitation, indicating that the site had been completely inundated. Above the silt layer community living began again. Such flood experiences may lie behind the Mesopotamian deluge stories. The myth would not normally develop in Israel where the only river—the Jordan— flows for most of its length below sea level. It would clearly seem that the Hebrew tale is borrowed and has it origin in these mythological models explaining the real actions of nature.