We have 4 seats left for our November 13th Science Salon. Cosmologist and theoretical astrophysicist, Dr. Priyamvada Natarajan, speaks with Dr. Michael Shermer about her latest book, Mapping the Heavens: The Radical Scientific Ideas That Reveal The Cosmos, followed by an intimate conversation with the audience that allows more interaction with the guest than a formal Q&A.

WATCH THE LIVE STREAM: This event will be streamed lived starting at 2pm PST. 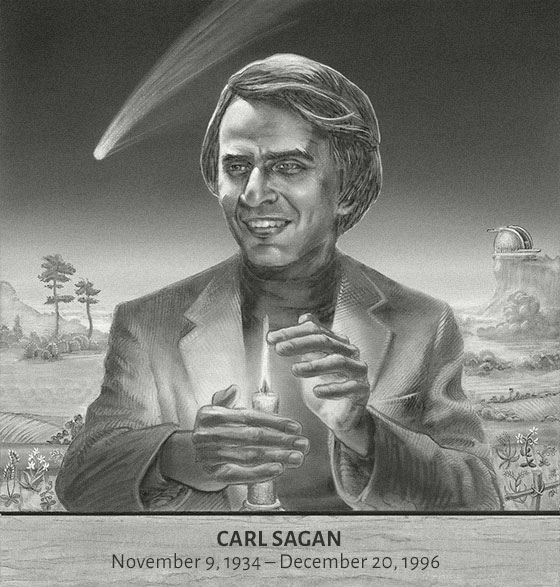 On this, November 9th, the day of Carl Sagan’s birthday (1934), we celebrate and remember the man whose contributions and commitment to furthering the work of scientific skepticism have helped make the world a more rational place.

The following is a transcript from the video Carl Sagan: A Way of Thinking, posted on the YouTube Channel Inspiration Journey. The audio is derived from an interview between Carl Sagan and Charlie Rose. Watch the video below.

Carl Sagan — A Way of Thinking

Sagan: It’s not that pseudoscience and superstition and new-age (so called) beliefs and fundamentalist zealotry are something new. They’ve been with us for as long as we’ve been human. But, we live in an age based on science and technology with formidable technological powers.

Interviewer: Science and technology are propelling us forward at accelerating rates.

Sagan: That’s right. And if we don’t understand it — and, by we, I mean the general public — if it’s something that “Oh, I’m not good at that. I don’t know anything about it…” then who is making all the decisions about science and technology that are going to determine what kind of future our children live in?

Interviewer: What’s the danger of all this?

Sagan: There are two kinds of dangers. One is what I just talked about: that we’ve arranged a society based on science and technology, in which nobody understands anything about science and technology. And this combustable mixture of ignorance and power, sooner or later, is gonna blow up in our faces. And the second reason that I’m worried about this is that science is more than a body of knowledge. It is a way of thinking; a way of skeptically interrogating the universe with a fine understanding of human fallibility. If we are not able to ask skeptical questions, to interrogate those who tell us that something is true, to be skeptical of those in authority, then, we are up for grabs for the next charlatan (political or religious) who comes ambling along. It’s a thing the Jefferson laid great stress on. It wasn’t, he said, to enshrine, some rights in a constitution or bill of rights. The people had to be educated, and they had to practice their skepticism and education. Otherwise, we don’t run the government; the government runs us. You see, people read stock market quotations and financial pages. Look how complex that is. People are able to look at sports statistics. Look how many people can do that. Understanding science is not more difficult than that. It doesn’t involve greater intellectual activities. But, the thing about science is, first of all, it’s after the way the universe really is, and not what makes us feel better. And, a lot of the competing doctrines are after what feels good and not what’s true.

Interviewer: Science does not prove religion, because religion is faith-based.

Sagan: Let’s look at a little more deeply into that. What is faith? It is belief in the absence of evidence. No, I don’t propose to tell anybody what to believe. But, for me, believing when there is no compelling evidence, is a mistake. The idea is to withhold belief until there is compelling evidence. And, if the universe does not comply with our predispositions, OK. Then, we have the wrenching obligation to accommodate to the way the universe really is. So, who is more humble? The scientist who looks at the universe with an open mind and accepts whatever the universe has to teach us? Or, somebody who says everything in this book must be considered the literal truth, and never mind the fallibility of all the human beings involved in the writing this book?

I lost both my parents about 12 or 15 years ago. I had a great relationship with them. I really miss them. I would love to believe that their spirits are around somewhere. And, I’d give almost anything to spend five minutes a year with them.

Interviewer: Do you hear their voices ever?

Sagan: Sometimes. About six or eight times since their death, I’ve heard “Carl!” just in the voice of my father or my mother. Now, I don’t think that means that they’re in the next room. I think it means that I’ve had an auditory hallucination about it. I was with them for so long. I heard their voices so often. Why shouldn’t I be able to make a vivid recollection?

Interviewer: Here’s what’s interesting about this for me. You convinced me a long time ago that it was arrogant for me, or for anyone else, to exclude the possibility that there wasn’t some life outside our own, was an arrogance of intellect, that we should not assume. You couldn’t prove it, you didn’t know it was there, but the arrogance…

Interviewer: And, if you take that, why can’t you say “There is a lot we don’t know!”?

Sagan: I say it. Watch. There’s a lot we don’t know. That’s what I believe. But that doesn’t mean that every fraudulent claim has to be accepted. We demand the most rigorous standards of evidence, especially on what’s important to us. So, if some guy comes up to me — a channeler or a medium — and says “I can put you in touch with your parents,” well, because I want so terribly to believe that, I know I have to reach in for added reserves of skepticism, because I’m likely to be fooled, and much more minor, to have my money taken.

Interviewer: You are living with myelodysplasia.

Interviewer: You have been. Just share with us, because of your sense of language and your sense of understanding, what do you think about it and what does it do for you…?

Interviewer: But you thought about what it would be like to die.

Sagan: Certainly, and what it would be like for my family, and I didn’t much think about what it would be like for me because I don’t think it’s likely there’s anything that you think about after you’re dead. That’s it. A long dreamless sleep. I’d love to believe the opposite, but I don’t have any evidence. But one thing that it has done is to enhance my sense of appreciation for the beauty of life, and of the universe, and the sheer joy of being alive.

Interviewer: You had a healthy portion of that before this, but even you, it happens to: appreciation.

Sagan: Every moment. Every inanimate object, to say nothing about the exquisite complexity of living beings… You imagine missing it all, and suddenly, it’s so much more precious.

The God Distraction, Chapter Three: The Word of God

This is the third video in Mr. Deity’s new series: The God Distraction. If you missed them, you might want to first watch Chapter One: Arguments and Chapter Two: The Unknowable. In Chapter Three: The Word of God, Mr. Deity asks whether the Bible gives us any reliable knowledge of God or His will.

The holiday season is just around the corner. Shop for all your holiday essentials including gifts, decorations, and more at smile.amazon.com and Amazon will donate to the non-profit Skeptics Society. Your prices at Amazon remain exactly the same. Thank you for your support.