Mapping the Heavens: The Radical Scientific Ideas That Reveal The Cosmos

For those who could not make it to Pasadena, California for the Science Salon with cosmologist and theoretical astrophysicist from Yale University, Dr. Priyamvada Natarajan, we have made a video recording of the event available to you. Order the book from Amazon, and watch the Science Salon recording for free. 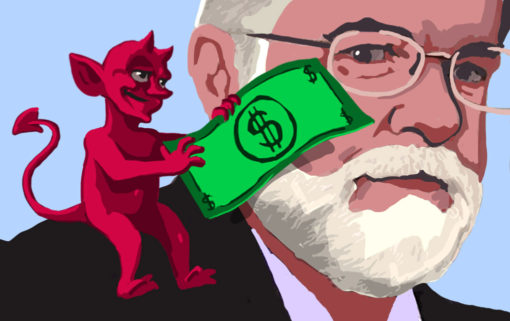 Every job has its moral dilemmas. There’s the bus driver who must drop passengers in questionable neighborhoods. The theater cashier who isn’t allowed to say, “You really want to see that stinker?” The fast food server who must suppress an urge to chastise a customer who has no better taste than to order a hotdog with ketchup.

At the more serious end of the continuum are people like the former Born Again Christian minister I met a few TAMs ago. Former, because, upon his embracing skepticism, conscience compelled him to give up his ministerial career. With it he gave up his livelihood, prestige, an adoring congregation, and a good many friends. As for the years and money he’d invested in chasing down an advanced theological degree? “Oh well,” he said.

So I can hardly complain. As a self-employed advertising and marketing practitioner, I have the luxury of deciding what work I will and will not accept. And because I work with multiple clients, declining or resigning one here or there hurts but won’t put me out of business.

Not that exercising that luxury is easy. Selection bias shmelection bias: I am certain that some supernatural force gets a kick out of sending slimy but temptingly profitable opportunities my way when I’m most desperate for cash.

Take, for instance, the time Greg called on the heels of my having lost a substantial client, or, to put it another way, when I was trying to calculate how long I could go without eating in order to make the next house payment. “I’ve been retained to shoot a commercial,” he said, “and I need you to write it.”

Already counting my chickens, I said, “Absolutely. What’s the product?”

“It’s all natural,” he gushed, unaware that he had just raised Red Flag Number 1. “A mineral,” he went on, raising Flag 2. “You put it in your fridge and your food lasts longer.” Flag 3.

Writer and researcher Mike Dash (Spring Heeled Jack) returns to talk about the less famous Scottish lake monster alleged to live in Loch Morar. While not as widely known as Nessie, Morag (as she is known) has her own fascinating history.

Get the digital edition instantly from PocketMags.com, or via the Skeptic Magazine App for iOS, Android, Windows, Kindle Fire HD, Mac, and PC. Or, order the print edition from Shop Skeptic. Try the latest issue in digital format free for 30 days! 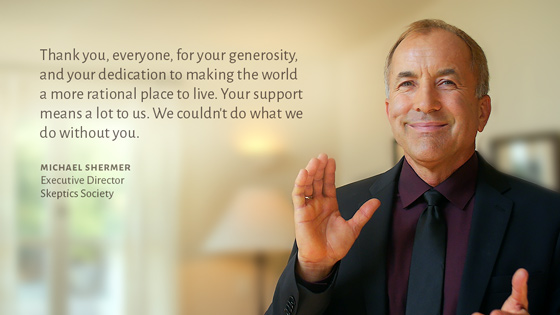 Your annual donations help your Skeptics Society—a 501(c)(3) nonprofit educational organization—to promote science and critical thinking. You can make a tax-deductible donation online using your credit card, or make a recurring donation via PayPal, or by downloading a printable donation card to make your donation by cheque in the mail. You may also make a donation by calling 1-626-794-3119. All donations are tax deductible.

We are looking forward to 2017 and are pleased to report that we have had many successes this year, which you can read about in a 4-page update from Michael Shermer, the Skeptics Society’s Executive Director.