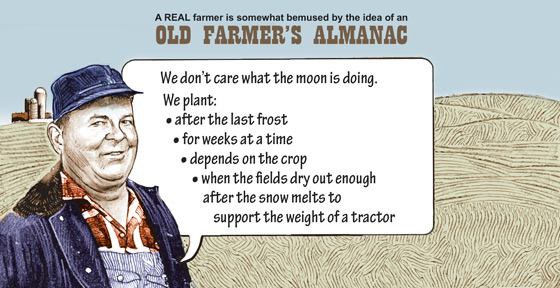 In this week’s eSkeptic, Dr. Karen Stollznow discusses the awkward mix of science and superstition found in almanacs. This article originally appeared in Skeptic magazine 18.1 (2013).

As I write, it’s that time of the year again when the weather almanacs appear in the bookstores. The Old Farmer’s Almanac has been predicting the weather inaccurately for 221 years, but this hasn’t dampened its popularity, or that of its rival The Farmer’s Almanac. It’s difficult enough to predict the weather for the week ahead, although these two almanacs claim “amazingly accurate” long-range weather predictions for the year ahead.

Before the days of modern meteorology, people relied on almanacs for their weather forecasts. Various versions of almanacs have been in existence since Babylonian times, when astronomers produced tables to predict planetary phenomena. A one-time apothecary, Nostradamus found his fortune when he began writing almanacs, which included astrological prophecies, weather forecasts, and political predictions. He began writing one or more almanacs annually, compiling thousands of predictions. The success of these almanacs prompted him to pen his bestknown book, The Prophecies.

Adopting the pseudonym “Richard Saunders,” Benjamin Franklin published the Poor Richard’s Almanack from 1732 until 1758. This name was taken from the author of the Apollo Anglicanus, a popular London almanac during the 17th century. Poor Richard’s Almanack was a bestseller of its day, and was famous for Franklin’s aphorisms and proverbs. Much of this folk wisdom lives on in contemporary English. The following sayings are attributed to Franklin, “Early to bed and early to rise, makes a man healthy, wealthy and wise” and “He that lies down with Dogs, shall rise up with fleas.”

In the early U.S., almanacs were as familiar a sight in the homes of farmers as a bible. Their livelihoods depended on the seasons, and knowing the weather in advance would indeed be a benefit. Almanacs weren’t just about weather. They were also popular among the other members of the household for their calendars, household hints, recipes, puzzles, poems and serialized stories. […]