The Way of the Mister: Evidence & Change, Parts I and II

In Evidence & Change, Part I below, Brian Dalton asserts that there not only could be evidence of God’s existence, but that — just based upon the Bible itself — there should be mountains of it! But, where is it?!

After Part I was released, a viewer challenged Mr. D to respond to several criticisms, which Mr. D did in the following two videos: 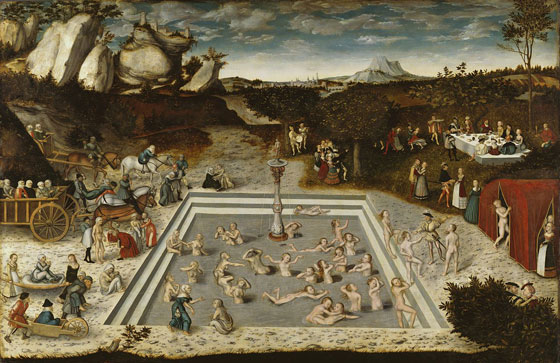 ABOVE: The Fountain of Youth, 1546 painting by Lucas Cranach the Elder [Public domain], via Wikimedia Commons

The media love to hype “Fountain of Youth” claims. Many diverse treatments being promoted as “anti-aging” remedies are not grounded in science, are misleading, and sometimes even illegal. In this week’s eSkeptic, Harriet Hall, M.D. discusses some of the those treatments. This column was originally published in Skeptic magazine 21.4 (2016).

The Spanish explorer Ponce de León wasn’t really looking for the Fountain of Youth when he trekked through Florida. That’s only a legend that wasn’t attached to his name until after his death. The idea of anti-aging remedies dates back to at least 3500 BCE, and the hope is alive and well today. Who wouldn’t like to turn back the clock and regain their lost youth? Who wouldn’t want to ward off death?

Longevity clinics have proliferated in recent years. They offer everything from “age optimization services” to “aesthetic facial rejuvenation,” from “youth maintenance” to “hormone optimization,” from supplements to stem cells. The claims they make are not grounded in science; they are misleading and sometimes even illegal. Jerry Mixon, M.D., of the Longevity Medical Clinic in Washington State, was disciplined for improperly diagnosing and treating four patients for growth hormone deficiency after advertising “comprehensive hormone supplementation as an anti-aging remedy.” Many diverse treatments are being promoted as “anti-aging” remedies. What does the scientific evidence say about them?

No currently marketed intervention—none—has yet been proved to slow, stop or reverse human aging, and some can be downright dangerous.

Antioxidants. Eating foods high in antioxidants may help reduce the risk of cancer and other disorders; but there is no good evidence that taking anti-oxidant supplements is helpful, and in some cases it causes harm. There is no evidence that people taking those supplements will live longer or age more slowly.

Hormone treatments include estrogen, testosterone, DHEA, human growth hormone, and diet supplements that claim to increase the body’s production of these hormones. These hormones have legitimate uses for treating diagnosed medical conditions, but they all carry risks and side effects and they do not slow the rate of aging. Estrogens were widely promoted to “keep women young” until studies showed they did more harm than good. Testosterone is being hyped as a cure-all for aging men, but it is useful only for men with diagnosed hormone deficiency. […]