WATCH THE LIVE STREAM THIS SUNDAY

Evaluate the Evidence for a Mysterious & Advanced Lost Civilization 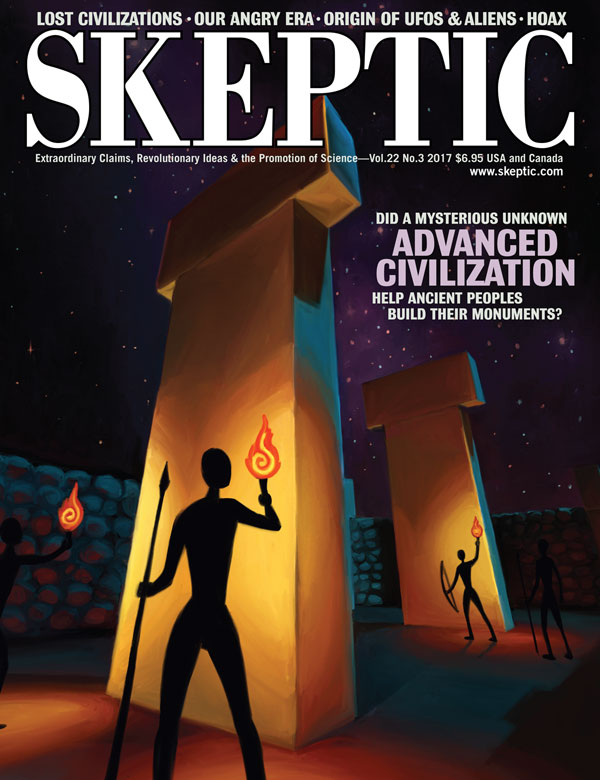 In the latest issue of Skeptic magazine (22.3): Debating Science and Lost Civilizations: Michael Shermer on the Joe Rogan Experience; Conjuring Up a Lost Civilization: an Analysis of the Claims Made by Graham Hancock in Magicians of the Gods; Lost Civilizations and Imaginative Conjectures; The Real Origin of UFOs and Aliens: How the Media Shaped Our Ideas About Extraterrestrials; Publicly Funded Stem Cell Research: California’s $3-Billion Experiment in Public Science; Science, Facts, and “Provisional” Knowledge; Juicing for Health or Torture; Our Angry Era; Zombies: The Gruesome True Story of Zombies…

We offer a 30-day free trial to new digital subscribers on annual subscriptions within the Skeptic Magazine App for iOS and Android devices.

Get this issue of Junior Skeptic bound within issue 22.3 of Skeptic

Our world has been conquered by hordes of zombies! They menace us in video games, comics, television, and movies. They lurch gruesomely down city streets in “zombie walk” events. After decades of zombie fiction, the walking dead are more popular than ever. Mindless, moaning, hungry for human flesh, zombies may be the ultimate modern monsters. They’ve spread like a virus through tales of terror and horrified imaginings. But where did the idea come from? Were zombies invented for fiction, or do they have a basis in legend—or perhaps even in reality? Could anything like fictional movie zombies actually exist in the real world?

Join us for a 19-day tour of the Emerald Isle 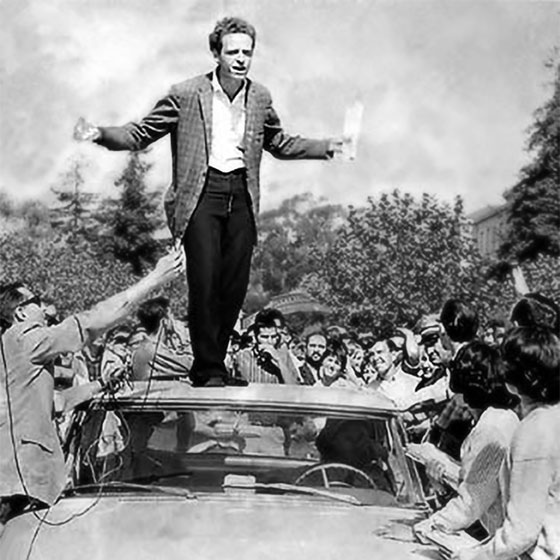 ABOVE: UC Berkeley, Sproul Hall Plaza, October 1 1964. Free Speech Movement advocates, including Mario Savio in this instance, speak from the roof of a police car. They remove their shoes before climbing on the car, in order to do no damage. In the back seat of the car sits an FSM leader whom the police have arrested.

Is Antifa an enemy of free speech? In this week’s eSkeptic, Raymond Barglow discusses the recent violent demonstrations in Berkeley, which purported to “fight fascism,” while fueling it instead.

Berkeley California is famous for its history of political protest. In 1949, faculty and students at the University of California opposed an anti-Communist loyalty oath imposed by the Board of Regents. In 1964, Berkeley was home to the Free Speech Movement and subsequently to resistance against the war in Vietnam. These political efforts were all peaceful — very deliberately so. In the early 1960s, some Berkeley activists had traveled to Mississippi and other Southern states to give support to the Civil Rights Movement, and they returned as advocates of Martin Luther King’s politics of nonviolence.

Although wide differences remain, it clearly is possible for us to reach through to one another, not with a fist but with an open hand.

During the Free Speech Movement (FSM), the protesting students made a point of allowing the speech of those who disagreed with them. They held that even speech deemed repellent should be countered not by disallowing that speech but by meeting it verbally with a different point of view. “Freedom of speech,” said FSM leader Mario Savio, “is something that represents the very dignity of what a human being is. … That’s what marks us off from the stones and the stars…. It is the thing that marks us as just below the angels.” This high-minded ideal has not weathered well in Berkeley in recent years. In 2017, this town, former champion of free speech, has become known instead as its enemy: those who gather here in Berkeley to express their support for right-wing causes cannot anticipate that their meetings and rallies will be allowed. Committed to shutting down such events are several small but very militant left groups: “black bloc” and “Antifa,” both of which originated in Western Europe in the 1980s, and “By Any Means Necessary,” a revolutionary organization that was founded in the United States in 1995. 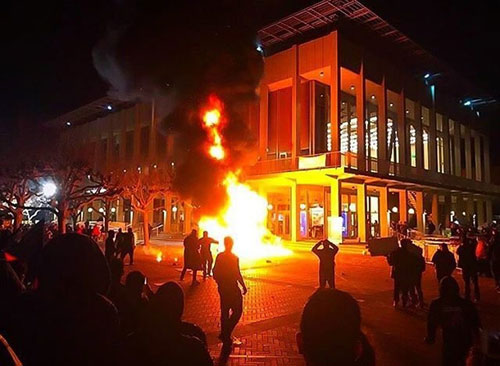 On February 1, 2017, Milo Yiannopoulos, a right-wing media star, was prevented from speaking in Berkeley by violent activists belonging to these groups and intent on, in their terms, “stopping Fascist speech.” On the day of Yiannopoulos’ scheduled appearance, Berkeley Mayor Jesse Arreguin tweeted: “Using speech to silence marginalized communities and promote bigotry is unacceptable. Hate speech isn’t welcome in our community.” A few hours later he qualified that statement in another tweet, “Violence and destruction is not the answer,” but that scarcely corrected the first impression conveyed to the world: across the political spectrum, the mass media condemned the “bigotry” and “hypocrisy” of Berkeley’s far left. An article in the liberal-leaning Huffington Post pointed out that Berkeley had gifted a propaganda victory to the right:

The violence at the UC Berkeley campus Wednesday night which cancelled the speech of alt-right provocateur Milo Yiannopoulos is such a debacle for the national opposition to Trump that it almost defies belief…. At exactly this moment, because of what happened at Berkeley, the Trump regime gets to present itself as the guardian of free speech in America. […]

DO YOU VALUE WHAT WE CREATE?

The Skeptics Society is a US 501(c)(3) nonprofit organization that operates on your generous patronage. If you enjoy what we create (magazines, videos, websites, salons, debates, events, etc.), please show your support by making a donation online, by mail, or by phone at 1-626-794-3119. All donations are tax-deductible.