In conjunction with our 25th anniversary milestone that we are celebrating, we would also like to share with you this recent profile of Michael Shermer featured in the Wall Street Journal, published on September 1, 2017, written by Alexandra Wolfe, republished here with permission.

The founder of the Skeptics Society has devoted his career to questioning orthodoxies, from religious belief and self-help movements to the anti-scientific claims of left and right 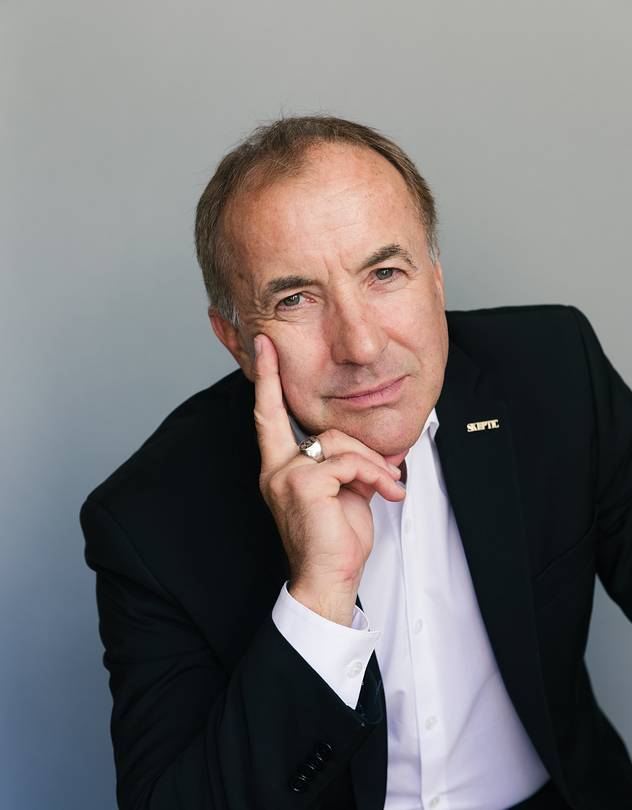 Michael Shermer, the founder of the Skeptics Society, points to a single event in the late 1970s as his breaking point with the Christianity of his youth. The “final straw,” as he calls it, was finding himself at the hospital bedside of his college girlfriend, who had been a passenger in a van that rolled off the side of a hill, breaking her back and leaving her paralyzed from the waist down. He prayed fervently for her recovery, to no avail. “If anyone deserved to be healed it was her, and nothing happened, so I just thought there was probably no God at all,” he recalls.

His career over the past several decades has involved insistent questioning not just of religious belief but of other sorts of orthodoxy, in pop culture, self-help, science and politics. This month marks the 25th anniversary of the Skeptics Society, which is now a 50,000-member group dedicated to “promoting critical thinking and lifelong inquisitiveness.”

In his longstanding monthly column for Scientific American, Dr. Shermer, 62, has turned a critical eye on antivaccination advocates, the campus craze for condemning “micro-aggressions” and disinviting controversial speakers, and the movement to ban genetically modified crops. He has come out against both climate-change alarmists and deniers. (He tends to side with commentators such as Matt Ridley and Bjorn Lomborg, who agree that humans are changing Earth’s climate but argue that the consequences may not be as dire as doomsayers think.) In his columns and books, he has debunked everything from UFOs and claims of alien abduction to conspiracy theories about the Kennedy assassination and the 9/11 attacks.

A convert to evangelical Christianity as a high-school student in La Cañada, Calif., he went to Pepperdine University intending to become a theologian. But after taking classes in science and philosophy, he decided to study psychology instead. He later earned a Ph.D. in the history of science at Claremont Graduate University.

Unable to find a job as a professor, he went to work at a cycling magazine in Irvine, Calif. He became so interested in the sport that he started cycling hundreds of miles a week and racing long distances, with the support of corporate sponsors. In 1982, he co-founded the 3,000-mile Race Across America, which bills itself as “the world’s toughest bicycle race.”

At night, Dr. Shermer taught at Glendale Community College. He is now a presidential fellow at Chapman University in Orange, Calif., where he offers a course called “Skepticism 101.” The school is about 2½ hours from Santa Barbara, where he lives with his wife.

Dr. Shermer started the Skeptics Society in 1992 out of his garage. For the past 25 years, he has also edited and published Skeptic magazine, which he says tackles issues scientifically, questioning hypotheses and weighing research and data. “The principle is to start off skeptical and be open-minded enough to change your mind if the evidence is overwhelming, but the burden of proof is on the person making the claim,” he says. “I would change my mind about Bigfoot if you showed me an actual body, not a guy in an ape suit in a blurry photograph.”

Dr. Shermer is the author of more than a dozen books, including Why People Believe Weird Things (1997), whose targets included creationists, Holocaust deniers and believers in ESP, and The Moral Arc (2015), which argued that reason and science have made the world progressively more just.

His new book Heavens on Earth comes out in January. In it, he casts a critical eye on many religious visions of the afterlife and on the high-tech quest to evade death through such methods as deep-freezing (cryonics) or uploading memories into the cloud. “There’s no assurance that by copying every last thing in your brain, you’re going to wake up and say, ‘Here I am!’ ” he says. “You wouldn’t wake up inside the computer—you’d just be dead.”

President Donald Trump may often dismiss “fake news,” but Dr. Shermer warns against shrugging off evidence. Still, he says, “Everyone does it to a certain extent…It’s a little more heightened now because the internet is so fast to respond in real time.” Politicians have always ignored data, he says, though Mr. Trump “seems to be more bold about it than others, and that inspires others to do the same.”

Recently, Dr. Shermer has denounced both the alt-right and “the regressive left.” After the violent white supremacist protest in Charlottesville, he warned against what he calls “this whole ‘punch a Nazi’ thing,” including the actions of the controversial far-left movement known as antifa. “This is why the antifa movement is just as bad as the white supremacist movement,” he says. “They both feel they have a moral cause that’s worth dying for and worth killing for.”

In the decades ahead, Dr. Shermer expects to see more people adhering to secular philosophies and Eastern religions with stronger links to science: Meditation, he says, can clearly improve health and well-being.

He is less enthusiastic about the rise of some New Age philosophies, which he says can contain troubling quasi-religious urges toward utopianism. “There is no one answer to what makes a perfect society,” he says, and the attempt to create an earthly paradise can turn murderous, as it did at Jonestown in Guyana in 1978: “Someone is in your way, preventing you from achieving eternal happiness, and they have to be dispensed with.”

Dr. Shermer considers organized self-help movements misguided because they tend to encourage people to chase after money and a simple ideal of happiness, rather than to find satisfaction in a purposeful life.

UFOs. Aliens. Strange crop circles. Giant figures scratched in the desert surface along the coast of Peru. The amazing alignment of the pyramids. Strange lines of clouds in the sky. The paranormal is alive and well in the American cultural landscape. In UFOs, Chemtrails, and Aliens, Don Prothero and Tim Callahan explore why such demonstrably false beliefs thrive despite decades of education and scientific debunking.

Employing the ground rules of science and the standards of scientific evidence, Prothero and Callahan discuss a wide range of topics including the reliability of eyewitness testimony, psychological research into why people want to believe in aliens and UFOs, and the role conspiratorial thinking plays in UFO culture. They examine a variety of UFO sightings and describe the standards of evidence used to determine whether UFOs are actual alien spacecraft.

Finally, they consider our views of aliens and the strong cultural signals that provide the shapes and behaviors of these beings. While their approach is firmly based in science, Prothero and Callahan also share their personal experiences of Area 51, Roswell, and other legendary sites, creating a narrative that is sure to engross both skeptics and believers.

Join us for a 19-day tour of the Emerald Isle