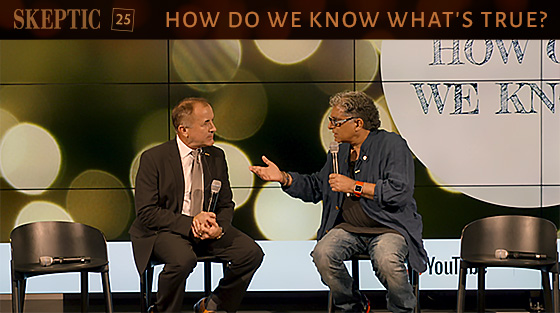 In late September 2017, in celebration of 25 years of Skeptic magazine and the Skeptics Society combating ‘fake news,’ Dr. Michael Shermer hosted a live variety science show, in partnership with YouTube Space NY, to explore the question: ‘How Can We Know What’s True?’.

Canadian hip-hop rapper, Baba Brinkman, opened the show with a rap about perception, hallucination, optical illusions, and the predictive model of consciousness.

Following that, in the name of open dialogue between those with differing or polarized worldviews, Michael Shermer (Director of the Skeptics Society, and creator of Skeptic magazine) discusses consciousness and the nature of reality with Deepak Chopra (philosopher and self-proclaimed “radical skeptic”).

In the following video, Michael Shermer discusses spirituality and science with Deepak Chopra (philosopher), Aspen Matis (author of Girl in the Woods), and Seth Andrews (creator and host of The Thinking Atheist).

Tara helps Matt understand the importance of “listening to the universe.” 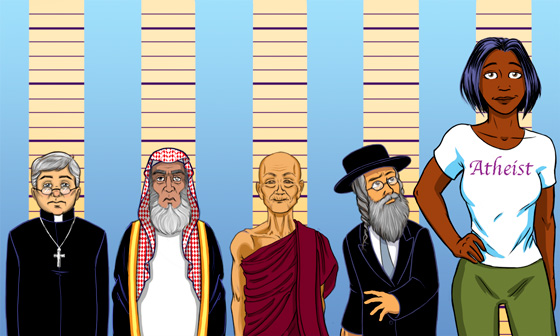 In this week’s eSkeptic, Dr. David Speed examines why the definitional ambiguity of the word “spirituality” is problematic for researchers who seek to explore the relationship between it and other constructs.

What is Spirituality, Anyway?
Is “Spirituality” so Broadly Defined that Testing for it is Meaningless?

There has been an explosion of research addressing spirituality over the past two decades. The use of the term “spirituality” is a staple of our everyday vernacular, whereby many have friends who will identify as spiritual, but not religious. The ubiquity of the “spiritual” label is curious given that a definition of spirituality is rarely discussed. Granted, people are often not required to precisely define concepts that they are discussing, so the fact that spirituality means different things to different people is largely irrelevant in everyday conversation. However, this definitional ambiguity is problematic for researchers who seek to explore the relationship between spirituality and other constructs. In other words, while the average citizen can communicate in imprecise ways and get away with it, scientists and researchers do not have that luxury.

Within the academic literature there does not appear to be an agreed-upon definition of spirituality, while there also appear to be radically different conceptualizations of what “being spiritual” means. One review paper with the express intent of clarifying the definition of spirituality summarized its findings by stating, “Spirituality is an inherent component of being human, and is subjective, intangible, and multidimensional.”6 This statement means that all humans are spiritual although they experience this spirituality differently. However, such a statement is not helpful because it could be used to justify any range of definitions. Offering carte blanche to the spirituality definition does nothing to advance the field of research. If everything can be spiritual then logically, any measure purporting to measure spirituality is justified. […] 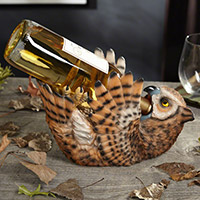 In this episode of MonsterTalk — The Science Show About Monsters, we continue our examination of the case of the Kentucky Goblins. Blake is joined by CSI investigator Joe Nickell to discuss the details of the Kelly-Hopkinsville case and what real world creature Joe thinks best accounts for the mysterious events on that Kentucky farm back in 1955.

If you missed it, read the episode notes and listen to Part 1.