Jesse Bering responds to Bill Donohue’s claim that if Anthony Bourdain had been a religious man, he wouldn’t have taken his own life. Bering is the Director of the Centre for Science Communication at the University of Otago, New Zealand, and Donohue is the President of the Catholic League for Religious and Civil Rights.

Below: Anthony Bourdain during the Peabody interview for Parts Unknown (May 19, 2014), by Peabody Awards [CC BY 2.0], via Wikimedia Commons (cropped). 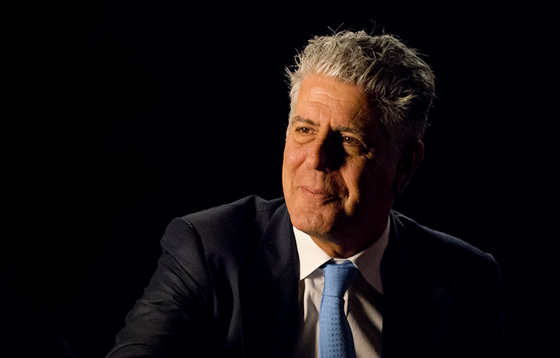 No, Being Religious Will Not Save You from Suicide

Among the more obnoxious things I’ve read in the wake of Anthony Bourdain’s death is that if only he had been a man of faith, he wouldn’t have taken his own life. Consider the almost sneering commentary offered by Bill Donohue, President of the Catholic League for Religious and Civil Rights, in a syndicated piece written less than a day after the rogue chef’s body was found hanging by the belt of his bathrobe in a Strasbourg hotel room. “If Anthony Bourdain had been a religious man, would he have killed himself? Probably not,” writes Donohue. “Bourdain was raised by his Catholic father and Jewish mother, though neither of them saw fit to raise him any religion … [Bourdain] said his views of religion were similar to those expressed by Christopher Hitchens, the British atheist. This is why the atheist organization, Freedom from Religion, was so proud of him.”

Not only is the tenor of Donohue’s sentiment completely tone-deaf and insensitive, his claim that Bourdain—or, for that matter, any other atheist suicide victim—could have been saved by religion is presumptuous and misleading. In his unabashed efforts to show why Catholicism is superior to other religions (he touts his book The Catholic Advantage while writing about Bourdain’s suicide), Donohue points out that regular churchgoers are less likely to kill themselves. He’s right. But it turns out it’s a little more complicated than Donohue would have us believe. The church buffering effect against suicide that he’s alluding to, in fact, has almost nothing to do with faith. Rather, the correlation comes from churchgoers being part of an active community, one with formal rituals encouraging social engagement and regulated moral support. It’s what’s known as the “network theory” of religion and suicide, first articulated by Émile Durkheim in the late 19th century. In his famous treatise Suicide (1897), Durkheim reported that, despite their matched religiosity, Protestants were more likely to take their own lives than Catholics, a puzzling observation given that suicide is proscribed in both forms of Christianity. But Protestants are permitted free inquiry, have fewer formal rituals, and are characterized by more permeable groups.

This general trend—that it is church attendance, not simply religion, that protects people against suicide—has been found in study after study ever since. So, when Donohue writes that “those who are regular churchgoers have a much lower rate of suicide than atheists like Bourdain,” he’s conflating (and I suspect deliberately so) religious behavior and theism.

When it comes to suicide, the existence or nonexistence of God, or belief therein, is far less consequential than the tumult of our social lives. […]