No event in the twentieth century did more to popularize conspiracy theories and confuse the general public than the assassination of President Kennedy. By educating people about what actually happened to JFK, and how conspiracy theorists have deliberately lied about it, James K. Lambert hopes that we can also get the general public to better see the lies (aka “fake news”) of today. 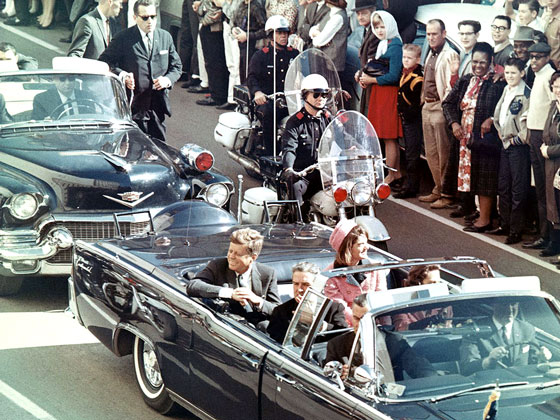 Above: President John F. Kennedy in the limousine in Dallas, Texas, on Main Street, minutes before the assassination. Also in the presidential limousine are Jackie Kennedy, Texas Governor John Connally, and his wife, Nellie. (Photo by Walt Cisco, Dallas Morning News [Public domain], via Wikimedia Commons).

Conspiracy Theorists, and the Harm They Do

The more one explores history, the more you can see how it does not line up with the ahistorical, wild stories that conspiracy theorists prefer to tell. “History,” as Former National Security Adviser Zbigniew Brzezinski once put it, “is much more the product of chaos than of conspiracy,” with competing groups and divisions within groups often at odds with one another and unpredictable individuals frequently changing the course of human events for good and for ill. No event in the twentieth century did more to popularize conspiracy theories and confuse the general public than the assassination of President Kennedy, and it has served as a model for how to misrepresent the past ever since.

Lee Harvey Oswald, for example, was an oddball loner, raised by a conspiracy obsessed mother who seems to have been truly delusional. He was a man so reckless and impulsive that he defected to the Soviet Union and then tried to kill himself when they would not allow him to stay. This perpetual loser couldn’t hold down a job or keep his wife from repeatedly leaving him. These shortcomings, however, did not keep him from having visions of grandeur—he told his wife he would be “Prime Minister of America” someday. But this pattern of instability and incompetence doesn’t work for the yarns that conspiracy theorists weave together. They need Oswald to be a CIA agent, a KGB agent, a double agent, or perhaps an agent of a group so secret we do not even know its name. At the very least, they need him to be the fall guy (a patsy) for others, with whom he allegedly had a great deal of contact, so they could string him along and put him in the right place at the right time. The fact that Oswald barely hung out with anyone and was completely unreliable to be anywhere or do anything that others wanted from him presents no problem for conspiracy theorists. They just assume that we don’t know the real story about who Oswald “really” was and what he “really” did.

Jack Ruby was also an oddball. A strip club owner who loved John F. Kennedy so much he would carry a picture of the president in his pocket and kiss it, as one might kiss a photograph of a newborn baby. For conspiracy theorists, Ruby was a well connected Mafia hitman sent to silence Oswald before he could talk. In reality, Oswald had already spent many hours talking to the authorities. And Ruby, despite the fact that he had his gun on him as he always did, had previously walked right past Oswald at the police station and did nothing but say, “He looks like Paul Newman.” It was only later that Ruby decided on an impulse to shoot the assassin of his beloved President, completely forgetting that he had left his dog alone in his car.

The so-called magic or pristine bullet—while it appears relatively undamaged from the side view, the bottom view shows considerable distortion that only makes sense if the bullet was rolling, end over end. Sideview (left), Endview (right). National Archives no. CE 399 and FBI C1.

Then there is Supreme Court Chief Justice Earl Warren, the Chairman of the President’s Commission on the Assassination of President Kennedy (aka the Warren Commission). This former District Attorney and California Attorney General had many years of experience with murder cases and a stellar reputation as a man of impeccable integrity. In fact, he was so well respected and liked by the people of California that he is the only person to have been elected Governor three times in a row. He was also one of the most independent minded and powerful Chief Justices the nation has ever seen, overseeing the desegregation of schools and the removal of mandatory prayer in schools, among other dramatic and often unpopular decisions. There is no reason to think that such a man would risk his legacy by covering up the murder of any President, let alone one he was friendly with and seems to have admired. But conspiracy theorists need Warren to be the chief lackey in charge of the official cover up, and so that is what he becomes in their stories, along with the four hundred people who worked on the commission’s report and the countless others who came in contact with them. For the conspiracy theorists, these people are nothing more than nameless henchmen who might as well be working for a super villain in a James Bond film—every one of them too cowardly or stupid to think for themselves. Before his death, Warren tried to point out the absurdity of such conspiracy fiction in his 1977 Memoir:

In the assassination of President Kennedy, there are no facts upon which to hypothesize a conspiracy. They simply do not exist in any of the investigations made by the Federal Bureau of Investigation, the Secret Service, the Central Intelligence Agency, or the Departments of State, Defense, and Justice. The last was headed by the late Robert F. Kennedy, brother of our assassinated President, who certainly wanted nothing short of the truth. In addition, the authorities of the state of Texas, of the city of Dallas, and law enforcement agencies of other cities throughout the country were anxious to be helpful in every possible way. All of this was supplemented by nine months of arduous work by our own staff of outstanding lawyers independent of all of these official agencies. And none of us could find any evidence of conspiracy. Every witness who could be found was examined, and it is revealing to note at this late date—nine years after the Commission Report was filed—that not a single contrary witness has been produced with convincing evidence. Practically all the Cabinet members of President Kennedy’s administration, along with Director J. Edgar Hoover of the FBI and Chief James Rowley of the Secret Service, whose duty it was to protect the life of the President, testified that to their knowledge there was no sign of any conspiracy. To say now that these people, as well as the Commission, suppressed, neglected to unearth, or overlooked evidence of a conspiracy would be an indictment of the entire government of the United States. It would mean the whole structure was absolutely corrupt from top to bottom, with not one person of high or low rank willing to come forward to expose the villainy, in spite of the fact that the entire country bitterly mourned the death of its young President and such a praiseworthy deed could make one a national hero. […]