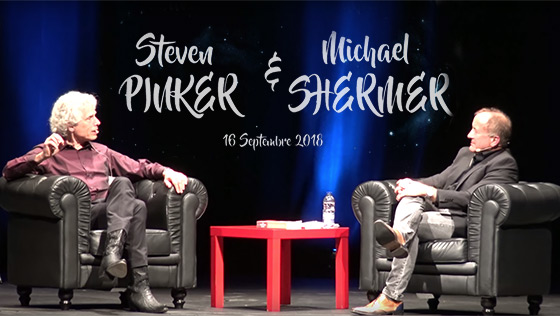 Thanks to Pangburn Philosophy and Travis Pangburn Harvard University psychologist Dr. Steven Pinker and Skeptic publisher Dr. Michael Shermer had an enlightening conversation for a full house at the L’Olympia theater in Montreal, where Pinker grew up. Pinker and Shermer discussed morality and science, morality and politics, good and evil, moral progress in an era of Populism and Nationalism, the negativity bias and how to put into perspective all the bad news reported daily by the media, and how to find meaning and purpose in a humanistic nontheist worldview.

Dr. Steven Pinker is a Johnstone Family Professor in the Department of Psychology at Harvard University where he conducts research on language and cognition. He writes for publications such as the New York Times, Time and The Atlantic, and is the author of ten books, including The Language Instinct, How the Mind Works, The Blank Slate, The Stuff of Thought, The Better Angels of Our Nature, and most recently, Enlightenment Now: The Case for Reason, Science, Humanism, and Progress.

Dr. Michael Shermer is the Publisher of Skeptic magazine, a monthly columnist for Scientific American, and a Presidential Fellow at Chapman University where he teaches Skepticism 101. He is the author of Why People Believe Weird Things, Why Darwin Matters, The Science of Good and Evil, and The Moral Arc. His new book is Heavens on Earth: The Scientific Search for the Afterlife, Immortality & Utopia.

This conversation took place on September 16th, 2018 at the Olympia Theatre in Montréal, Canada. 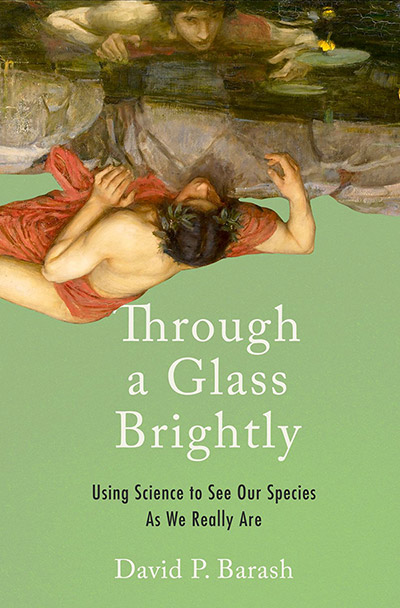 Humans have long seen ourselves as the center of the universe, the apple of God’s eye, specially-created creatures who are somehow above and beyond the natural world. This viewpoint — a persistent paradigm of our own unique self-importance — is as dangerous as it is false. In this conversation with Michael Shermer based on his new book Through a Glass Brightly, noted biologist and evolutionary psychologist David Barash explores the process by which science has, throughout time, cut humanity “down to size,” and how humanity has responded. Shermer and Barash also explore how evolutionary psychology became politicized, with the Right embracing it and the Left looking askance at it, based on a deeper commitment to human nature as grounded deeply in our biology and genetics vs. human nature as malleable and shaped primarily by culture. A lifelong liberal and social activist, Dr. Barash nevertheless accepts the science wherever it leads, regardless of ideology. From there Barash and Shermer discuss human aggression and violence, whether or not war is part of our nature, game theory and nuclear deterrence and why Barash thinks MAD (Mutual Assured Destruction) is a dangerous and fraudulent game to play with extinction on the line, how we can get to Nuclear Zero, and whether we should be optimistic or pessimistic for our species’ future.

Dr. David P. Barash is Professor of Psychology emeritus at the University of Washington and the author of Out of Eden, Buddhist Biology, Homo Mysterious, The Survival Game, Revolutionary Biology, and others, and co-author with his wife Judith Eve Lipton of Payback, Strange Bedfellows, How Women Got Their Curves and Other Just-So Stories, Making Sense of Sex and The Myth of Monogamy.

This Science Salon was recorded in audio format only on October 19, 2018. 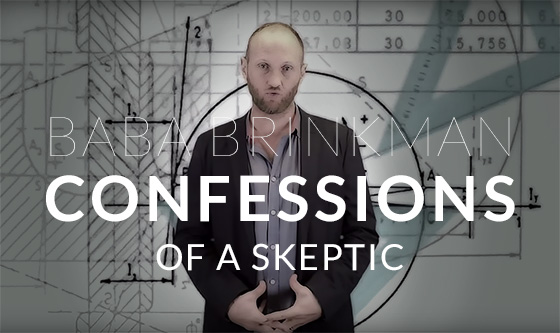 I CONFESS IT. I’M A SKEPTIC.

I believe in the scientific method.

Skepticism and the scientific method are not articles of faith, but New York-based Canadian rap artist Baba Brinkman avers that we can profess our devotion to them with no less fervor!

Brinkman is best known for his “Rap Guide” series of science-based hip-hop albums and theatre shows, including Rap Guides to Evolution, Climate Change, and Religion. Follow him on Twitter and Facebook. Support his work on Patreon.

The world premiere of this rap was performed at a live variety science show hosted by Dr. Michael Shermer, in partnership with YouTube Space NY in late September 2017, celebrating 25 years of Skeptic magazine and the Skeptics Society combating ‘fake news.’ The event explored the question: ‘How Can We Know What’s True?’.