In this dialogue Dr. Shermer speaks with Dr. David Sloan Wilson, the renowned evolutionary biologist and Distinguished Professor of Biology and Anthropology at Binghamton University. His previous books include Evolution for Everyone, The Neighborhood Project, Does Altruism Exist? and Darwin’s Cathedral. He is the president of the Evolution Institute and editor in chief of its online magazine, This View of Life. His new book, out this week, is This View of Life: Completing the Darwinian Revolution. He and Shermer discuss:

This Science Salon was recorded on February 1, 2019. We apologize for the quality of this recording; it was recorded before Michael moved to the new recording studio. We still have a couple episodes to release from the old studio. Quality of subsequent episodes will be better. 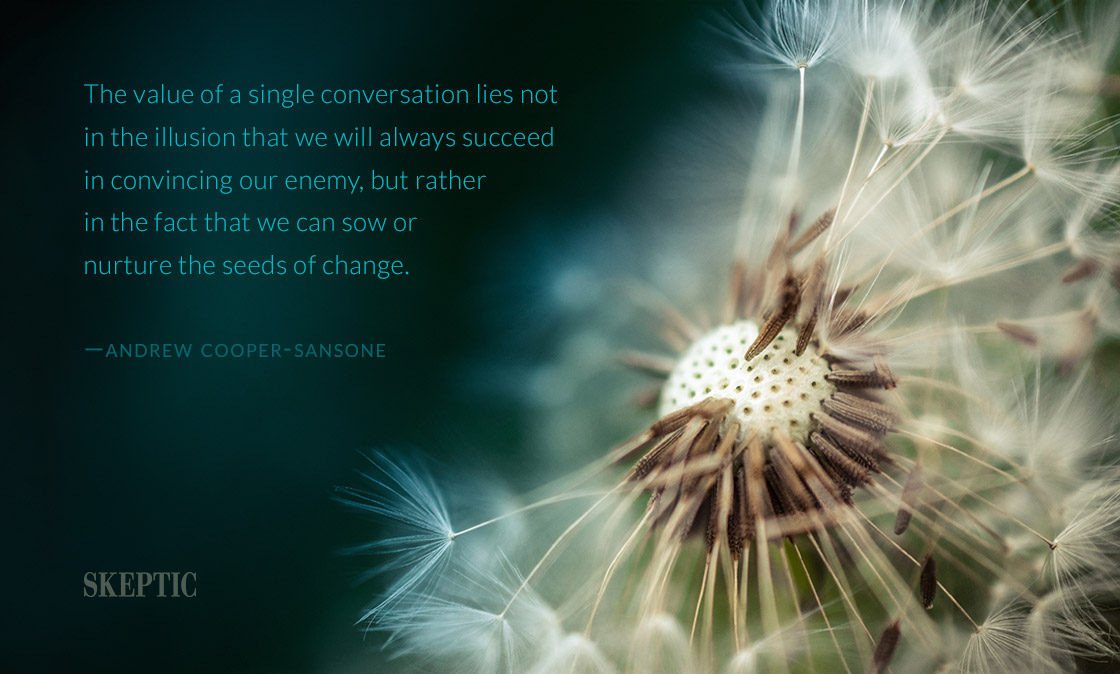 Most people take an attack on their beliefs as an attack on their identity. Andrew Cooper-Sansone avers that to succeed in changing minds and building a better world, we must begin by cultivating a compassionate view of our enemies’ deeply-held and identify-defining beliefs. This article appeared in Skeptic magazine 23.4 (2018).

They march, twenty or so strong, spilling grotesque, hate-filled rhetoric into the streets. Multicolored picket signs remind all passersby that a fiery eternity awaits them after death if they do not fear god’s wrath. Always protesting with a clear purpose, from funerals of mass shooting victims, to fallen soldiers, and pop icons, they deliberately scrape the exposed nerves of grieving families and friends of the deceased.1 These protestors remind artists, musicians, soldiers, homosexuals, apostates, and anyone who finds fault with their position that, by their mere existence, they are testing an angry god.

Sweaty-faced with terror struck eyes, he sits in front of a green screen that reads Infowars. He jumps frantically from one conspiracy theory to another, never giving any indication that he could be mistaken. He assumes that anything covered by the mainstream media is an attempt to control its viewers’ minds in order to implement a terrifying political agenda. He has thus claimed that during the 2016 presidential election, the mainstream media wanted to cover up the fact that Hillary Clinton is “an abject, psychopathic, demon from Hell that as soon as she gets into power is going to try to destroy the planet.” In fact, in nearly the same breath he suggests that Barack Obama too is a literal demon in disguise, all supported by information Jones obtained from “high up folks.”2 This is a man whose Youtube channel, before recently being banned by the company, had roughly 2 million subscribers.

With black masks concealing their identities, one member of the group reads emphatically from a script. A hostage sits in a chair, bound by ropes, awaiting the gruesome fate he has come to accept. The audience watches helplessly through a screen as the group makes good on their promise and brutally executes an innocent man.

The question that inevitably arises when faced with people who will commit these sorts of wrongs is why? What is the reason behind these outrageous acts? The Christian fundamentalist group known as the Westboro Baptist Church (WBC), the internet talk show host and conspiracy theorist Alex Jones, and extremist Islamist terrorists have something in common: they believe what they say. This fact of course extends to all manner of religious extremists, woo-peddlers, and even many medical quacks. Many of us see that this type of sincerity is at play, but we don’t necessarily recognize why that is, or what the implications of it might be. Here I want to go further and suggest that it is not simply that they believe, but rather that they have no choice but to believe in the madness running through their minds. They did not choose to be who they are, nor to live the lives they have, and in a very important sense, these people are victims of their own brains.

Understandably, many of us do not want to see it that way. We would rather have it that being evil (or a useful pawn for evil people) is a choice borne of libertarian free will. It is far simpler to see your ideological enemies as evildoers who revel in their malicious acts, than it is to recognize them as human beings who are unlucky to have lived the lives they have. If we hope to win these enemies over, we cannot start the conversation from a place of condescension or pure judgment; instead, we must meet them where they are, as ugly a place as that may be. And if we want to succeed in building a better world, we must convince some significant fraction of them that they are wrong, and this can only be done if we cultivate a compassionate understanding for how they have become the people, and sometimes the monsters, we see before us. […]