Ben Shapiro — The Right Side of History: How Reason and Moral Purpose Made the West Great In this wide ranging conversation, the noted conservative political commentator and public intellectual Ben Shapiro makes the case that what makes the West great is its foundation in Judeo-Christian values. We can thank these values, Shapiro argues, “for the birth of science, the dream of progress, human rights, prosperity, peace, and artistic beauty.” Shapiro says “Jerusalem and Athens built America, ended slavery, defeated the Nazis and the Communists, lifted billions from poverty and gave billions spiritual purpose. Jerusalem and Athens were the foundations of the Magna Carta and the Treaty of Westphalia; they were the foundations of the Declaration of Independence, Abraham Lincoln’s Emancipation Proclamation, and Martin Luther King Jr.’s Letter from Birmingham Jail.”

As you might expect, Dr. Shermer disagrees on the source of these values, attributing them instead to the Scientific Revolution and the Enlightenment and the secular thinkers who used reason and evidence to make the case for human rights and progress. For example:

These are all purely secular moral values derived from Enlightenment science and reason.

Shermer also asks Shapiro how he derives “all men are created equal” from “we were created in God’s image”. Shapiro has a very reasonable answer, to which Shermer read from Thomas Jefferson’s own explanation for the origin of that phrase. In a letter to Henry Lee in 1825, Jefferson wrote:

Neither aiming at originality of principle or sentiment, nor yet copied from any particular and previous writing, it was intended to be an expression of the American mind, and to give to that expression the proper tone and spirit called for by the occasion. All its authority rests then on the harmonizing sentiments of the day, whether expressed in conversation, in letters, printed essays, or in the elementary books of public right as Aristotle, Cicero, Locke, Sidney, &c.

Shapiro responded to Shermer’s counter-examples to his thesis, namely successful civilizations that arose before Judaism and Christianity, such as Sumeria, Babylonia, Akkadia, Assyria, Egypt, and Greece, and Christian civilizations that did not flourish, such as the Catholic countries of South America, or historically all the Christian nations in the Middle Ages that never produced anything like a democracy or capitalism.

As two members of the Intellectual Dark Web, Shapiro and Shermer show how people can disagree even on fundamental principles and still have a civil conversation, and along the way find agreement and common cause. Other topics that came up: 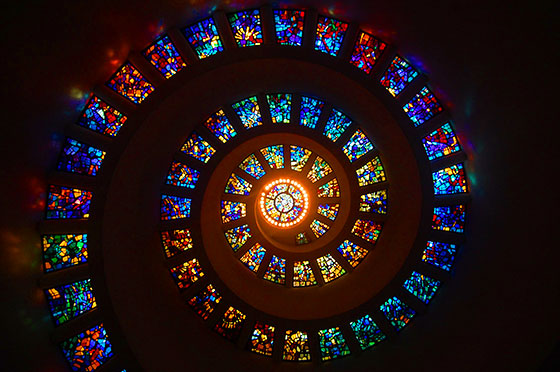 What is it about the human mind that so effortlessly translates natural events into messages from another realm — even despite our best attempts to deny that there’s any message in them at all?

Shortly after my mother died, I began to experience certain events that challenged my otherwise skeptical beliefs about the afterlife. To any objective observer, these events wouldn’t seem particularly profound; some were in fact so subtle and mundane that they wouldn’t have even registered in my consciousness under normal circumstances. But in the wake of my loss, my mind freighted with grief, these banal happenings took on special significance. It was as though my mom — or rather, her spirit — was attempting to part the veil between this world and the next, intent on communicating with me, her stubbornly atheistic child.

The morning after she passed, for instance, I awakened to the faint, melodious sounds of the wind chimes that hung from a tree branch just beneath her bedroom window. It was a still morning, but surely a breeze must have stirred it. My knee-jerk thought was not at all in keeping with my beliefs. “That’s her,” I said instinctively to myself. “She’s telling me she’s okay.”

One evening, as I lay reading in bed, I heard a loud crash — the sound of broken glass. Rushing downstairs to see what had caused it, I found that a stained-glass window, an extraction from an old church that I’d propped up decoratively on a shelf, had somehow fallen and shattered on the concrete floor. My mind raced to find an explanation. The cat, perhaps? But the cat had been sleeping soundly at the foot of my bed and had jumped at the sudden noise just as I had. I still can’t be certain, but in all probability, I’d merely left it leaning precariously on the shelf, with an eventual disastrous tumble being inevitable.

Yet just as with the wind chimes, it wasn’t the logical explanation that first leapt to my mind. Rather, it was a supernatural one. My mother hated that stained-glass window. “It’s not for me,” I recalled her saying when I first eyed it at an antique shop in Louisiana a few years prior. “But go on, get it if you like it.” And now there it was in a thousand broken pieces on the floor. I should add, this also happened on her birthday — the first since her death — and she’d been occupying my thoughts that whole day. In any event, the rationalist in me rejected any such supernatural attributions out of hand. Still, it certainly felt like a sign. […]