Through the lens of evolutionary science, Dr. Garcia offers a novel perspective on why we hold our political ideas, and why they are so often in conflict. Drawing on examples from across the animal kingdom, Garcia reveals how even the most complex political processes can be influenced by our basic drives to survive and reproduce—including the policies we back, whether we are liberal or conservative, and whether we are inspired or repelled by the words of a president. Garcia explains how our political orientations derive from an ancestral history of violent male competition, surprisingly influencing how we respond to issues as wide-ranging as affirmative action, women’s rights, social welfare, abortion, foreign policy, and even global warming. Critically, Garcia shows us how our instinctive political tribalism can keep us from achieving stable, functioning societies, and offers solutions for rising above our ancestral past. Dr. Garcia and Dr. Shermer also discuss:

Hector A. Garcia, Psy.D., is the author of Alpha God: The Psychology of Religious Violence and Oppression. He is an assistant professor in the department of psychiatry at the University of Texas Health Science Center at San Antonio, and a clinical psychologist specializing in the treatment of posttraumatic stress disorder in combat veterans. He has published extensively on evolutionary psychology, stress and politics in organizations, and the interplay between war and masculine identity.

In the new book America Before: The Key to Earth’s Lost Civilization, author Graham Hancock looks for traces of a lost Ice Age civilization in the Americas. Despite relying on controversial research and drawing extreme conclusions, his hunt still comes up short.

In 1552, the historian Francisco López de Gómara became one of the first to suggest that the American continents were in fact Atlantis. America was, he said, greater than Africa and Asia combined, and the peoples of Mexico even called water “atl,” the very name of Atlantis, in memory of the sunken capital of ancient times. Nearly five centuries later, the new book America Before opens with its author, Graham Hancock, telling readers that after decades of ignoring the “obvious clue” of Atlantis because of the stigma attached to Atlantis research, he had come to believe that Atlantis “does sound a lot like America” (xiv). 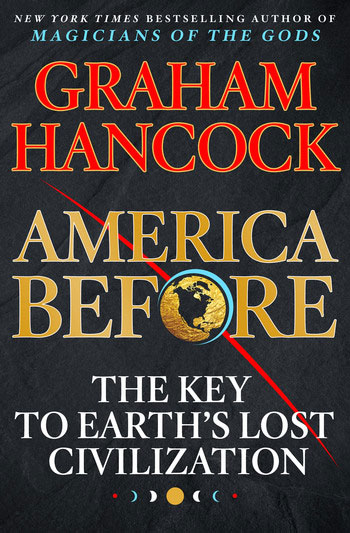 America Before is the story of Hancock’s search for proof that Atlantis—or a civilization so similar as to be identical in all but name—flourished in the Americas prior to the end of the last Ice Age. His new book is handsomely produced by St. Martin’s in the United States and Coronet in the U.K., well written and copiously illustrated.

In his early books on ancient mysteries, such as The Sign and the Seal (1992) and Fingerprints of the Gods (1995), Hancock wove a compelling narrative from sparse facts and heady speculation. These books were written as adventures in which Hancock cast himself in the role of a tweedier Indiana Jones, traveling the world in search of evidence of the impossible. Regardless of the conclusions he drew, the personal narrative of discovery created a compelling through-line that made these books engaging even for those who disagreed with the author’s ideas.

But with each successive book, Hancock seemed to anticipate that his audience is increasingly people who have read his earlier work. Although Hancock remains a formidable writer capable of compelling narrative set-pieces, his recent books have lacked something of the spirit of adventure. Since Hancock is no longer an innocent questing for truth but a self-styled advocate of “alternative archaeology,” his books have taken on the tone of jeremiads, their sense of wonder and discovery replaced with righteous indignation and the casual assumption that most readers will already be familiar with his earlier volumes, which he references frequently with the clear expectation that readers have read and largely agreed with them.

This led Magicians of the Gods (2015) to seem somewhat disjointed to those unfamiliar with Fingerprints, and America Before plunges the reader headlong into a web of assumptions and conclusions that don’t always have clear lines of evidence leading to them. In just the first few pages, Hancock dismisses the consensus view of the peopling of the Americas without ever quite explaining it, and he attacks “the materialist-reductionist mind-set of Western science” with the assumption that his readers are familiar with the philosophy of science, or at least angry enough at scientists to nod in agreement. His writing is much angrier even than in Magicians, with a greater number of charged asides attacking science and celebrating the spiritual over the material. His attacks on archaeology are much louder than in earlier books and in places distract from or even overwhelm his putative argument. […] 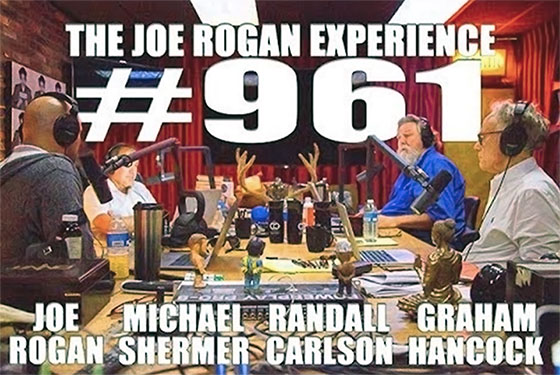 After his appearance on Joe Rogan’s wildly popular podcast with Graham Hancock and Randall Carlson, Skeptic magazine editor Michael Shermer decided to devote a special issue of the magazine to Hancock’s theory that an ancient lost civilization predates by tens of thousands of years all other known ancient civilizations. The follow article, published in Skeptic Vol. 22, No. 3, is Dr. Shermer’s account of the show and a refinement of his notes for why he is skeptical of Hancock’s theory. Since this issue was published he and Graham have enjoyed a cordial correspondence and friendship, so everything within this article should be read in the context of debating just the facts.

On May 16, 2017, I appeared on the Joe Rogan Experience (JRE) podcast (and YouTube videocast) along with Graham Hancock and Randall Carlson, plus our hand-selected “phone-a-friend” Skyped in guests (geologist Marc Defant for me, planetary scientist Malcolm LeCompte for Hancock and Carlson). It was a three-and-a-half hour marathon that at the time of this writing, several million people have heard or viewed on various platforms.

It was, in fact, my third appearance on the JRE, one of the most popular podcasts in the world. According to Joe, as of that week he was averaging over 120 million downloads a month, putting him on a par with the biggest talk show hosts on television, either cable or broadcast. He has a huge and diverse following, and for good reason—he’s a remarkable conversationalist. My previous two appearances lasted for three hours each, without any sense of time passing. Unlike most talkshow hosts I have engaged with over the decades, a dialogue with Joe Rogan is like talking to an old friend. He is warm, receptive to all ideas, and allows the conversation to advance organically without an agenda. For my solo appearances he was as sympathetic to my ideas as he was to those of Hancock and Carlson in their prior appearances on his show.

It was, therefore, surprising to find myself under something of a grilling from Rogan the moment I was given the opportunity to reply to a few opening comments by Hancock. It soon went from 2-on-1 to 3-on-1, which a great many people noted in comments on YouTube, Facebook, Twitter, and other outlets during and after the show. Here are just a few among hundreds: […]