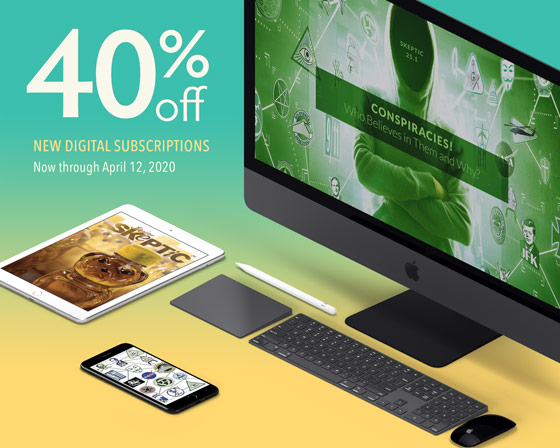 Now through April 12, 2020, enjoy 40% off new digital subscriptions to Skeptic magazine at PocketMags.com. Subscribe now and download the current issue instantly. Three more digital issues will follow as they are released (in June 2020, September 2020, and December 2020). Michael Shermer with Bart Ehrman — Heaven and Hell: A History of the Afterlife According to a recent Pew Research poll, 72% of Americans believe in a literal heaven and 58% in a literal hell (more evidence of the over-optimism bias and self-serving bias). Worldwide, over two billion Christians believe that because of their faith they will have a glorious afterlife. And nearly everyone wonders about what, if anything, comes after death. In Heaven and Hell, renowned biblical scholar and historian of religion Dr. Bart Ehrman investigates the powerful instincts that gave rise to the common ideas of heaven and hell and that help them endure. From the Epic of Gilgamesh to the writings of Augustine, Ehrman recounts the long history of the life after death. In different times, places, and cultures, people held a wide variety of views, and Ehrman is adept at showing how these influenced one another and changed in response to their historical, social, and cultural situations. His driving question is why and how Christians came up with the idea that souls will experience either eternal bliss or everlasting torment. Ehrman shows that the historical Jesus, Paul, and the author of Revelation would have been utterly perplexed by such ideas. These ideas are later Christian developments. Shermer and Ehrman also discuss:

Bart D. Ehrman is a leading authority on the New Testament and the history of early Christianity, and the author or editor of more than thirty books, including the New York Times bestsellers Misquoting Jesus, How Jesus Became God, and The Triumph of Christianity. A Distinguished Professor of Religious Studies at the University of North Carolina at Chapel Hill, he has created eight popular audio and video courses for The Great Courses. He has been featured in Time, The New Yorker, and The Washington Post, and has appeared on NBC, CNN, The Daily Show with Jon Stewart, the History Channel, the National Geographic Channel, BBC, and NPR.

Knowledge is power. Thanks to The Great Courses Plus everyone can tap into this power with just a click. Unlock unlimited access to objective, reliable, fascinating information on virtually any subject. Learn from the brightest minds around the world, and benefit from their years of experience and unique insight.

For a limited time only, my listeners will get 2 weeks free, then pay only $10/mth for 3 months. Sign up using my special URL: thegreatcoursesplus.com/salon.