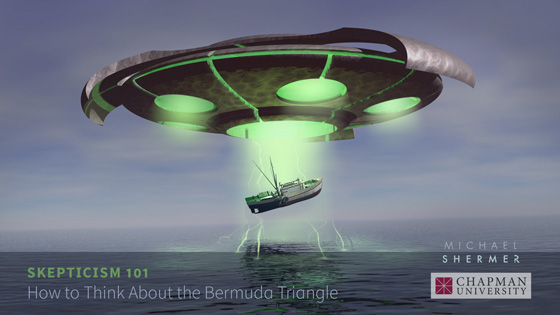 Dr. Michael Shermer examines the claims about the Bermuda Triangle using the tools of skepticism, science, and rationality to reveal that there is no mystery to explain. Selective reporting, false reporting, quote mining, anecdote chasing, and mystery mongering all conjoin to create what appears to be an unsolved mystery about the disappearance of planes and ships in this triangular shape region of the ocean. But when you examine each particular case, as did the U.S. Navy, Coast Guard, and especially insurance companies who have to pay out for such losses, it becomes clear that almost all have natural explanations, and the remaining unsolved ones are lying on the bottom of the ocean beyond our knowledge. 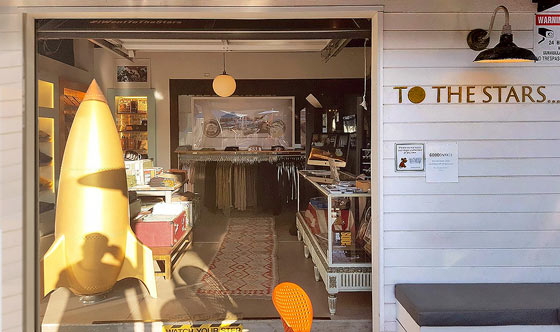 The media keeps making claims that the Pentagon supposedly announced that UFOs are ‘real.’ How much of that is really true? Robert Sheaffer — a leading skeptical investigator of UFOs — separates the facts from the hype.

Claims About a Government “UFO Program”
How Much is True?

For more than two years an organization called To The Stars Academy (TTSA), founded by rock singer and Blink-182 front man Tom DeLonge, has sucked the oxygen out of all other discussions of UFO-related matters. If news headlines are to be believed, TTSA has revealed that the government has been operating a secret UFO investigation program, has “released” UFO videos, and “admitted” that UFOs are real. However, as skeptics have so often found, much of what the media reports is inaccurate, incomplete, or just plain false.

What we know is that in 2008 former Senate Majority Leader Harry Reid arranged for the Pentagon to give a $22 million contract to his friend and campaign contributor Robert Bigelow, under a program called AATIP (Advanced Aviation Threat Identification Program). Or was it AAWSAP (Advanced Aerospace Weapon System Applications)? Even TTSA’s people can’t agree whether or not these two acronyms represent the same program: John Greenewald of The Black Vault noted that Hal Puthoff of To The Stars Academy, as well as the Pentagon, say that AATIP and AAWSAP were the same program, while Luis Elizondo, also of To The Stars Academy, insists they were not. (And yes, this is the same Hal Puthoff who, with Russell Targ, tested Uri Geller at SRI back in the 1970s.)

For starters, did the U.S. Navy “admit that UFOs are real”? Many news stories claimed that they did. For example, on September 16, 2019, Popular Mechanics reported that “The Navy Says Those UFO Videos Are Real. And they were never meant to be released to the public.” The headline is misleading. It’s only at the bottom of the article that we read, “the Pentagon says the aerial objects in the videos are simply unidentified, and for now, unexplained. The Navy is pointedly not saying the objects are flying saucers or otherwise controlled by aliens”. Exactly. 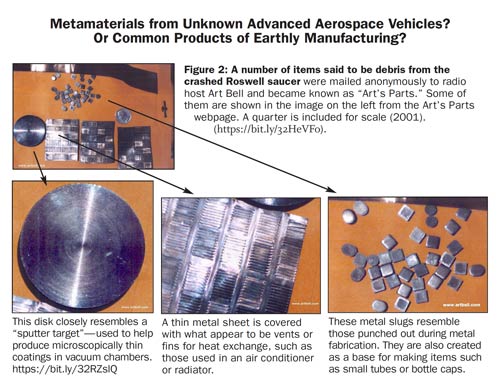 As well, the Navy never “released” any of those videos to the public, as To The Stars has been claiming. Somebody leaked them. We don’t know who the leaker is, although we can have our suspicions. (The Navy finally did officially release these three videos on April 27, 2020, although they didn’t provide any additional information. Mick West made an excellent video explaining what these Navy videos probably are.) And this is just a fraction of the confusion surrounding this story.

The Pentagon’s 38 papers on Weird Science

What was the actual purpose of AATIP/AAWSAP? Was it really a UFO investigation program? Despite nonstop claims from Luis Elizondo, Tom DeLonge, and others that AATIP was a government program to study UFOs (or “UAPs” — Unidentified Aerial Phenomena — as they prefer to call them), all attempts to document that claim have failed. The only thing that AATIP can be shown to have produced are 38 papers on weird science, with titles like “Advanced Space Propulsion Based on Vacuum” (Dr. Hal Puthoff) and “Invisibility Cloaking” (Dr. Ulf Leonhardt). Some of these papers are available on line, while others have not been released. None of these papers directly relate to investigating UFO reports — several of them seem to take “anomalous vehicles” as a given, and speculate how such vehicles might operate. Given that Bigelow Aerospace Advanced Space Studies (BAASS) was awarded a bit over $22 million by AATIP, that works out to about $580,000 per paper on weird science, which is nice work if you can get it. […]