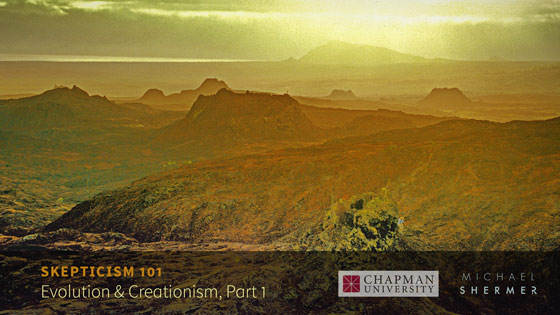 Dr. Michael Shermer takes viewers to the Galápagos Islands to retrace Darwin’s footsteps (literally — in 2006 Shermer and historian of science Frank Sulloway hiked and camped all over the first island Darwin visited) and show that, in fact, Darwin did not discover natural selection when he was there in September of 1835. He worked out his theory when he returned home, and Shermer shows exactly how Darwin did that, along with the story of the theory’s co-discoverer, Alfred Russel Wallace. Then Shermer outlines what, exactly, the theory of evolution explains, how it displaced the creationist model as the explanation for design in nature (wings, eyes, etc. as functional adaptations), and why so many people today still misunderstand the theory and how that sustained the creationist model.

About the photograph above

Charles Darwin described of what he called the “craterized district” on San Cristóbal, Galápagos Islands thusly:

The entire surface of this part of the island seems to have been permeated, like a sieve, by the subterranean vapours: here and there the lava, whilst soft, has been blown into great bubbles; and in other parts, the tops of caverns similarly have fallen in, leaving circular pits with steep sides. From the regular form of the many craters, they gave to the country an artificial appearance, which vividly reminded me of those parts of Staffordshire, where the great iron-foundries are most numerous.

Mentioned in this lecture