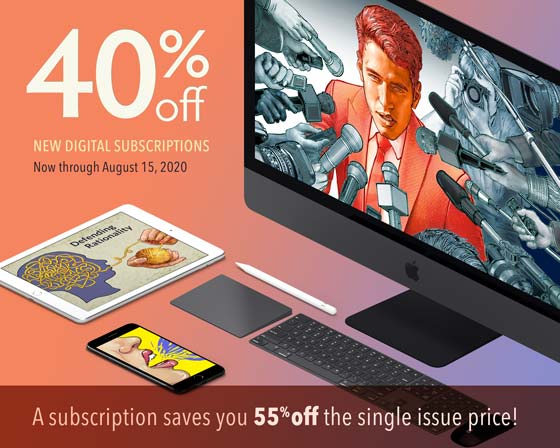 Now through August 15, 2020, enjoy 40% off new digital subscriptions to Skeptic magazine at PocketMags.com. That’s a 55% discount off the single issue price! Subscribe now and download the current issue instantly. Three more digital issues will follow as they are released (in September 2020, December 2020, and March 2021). Michael Shermer with Michael Shellenberger — Apocalypse Never: Why Environmental Alarmism Hurts Us All Michael Shellenberger has been fighting for a greener planet for decades. He helped save the world’s last unprotected redwoods. He co-created the predecessor to today’s Green New Deal. And he led a successful effort by climate scientists and activists to keep nuclear plants operating, preventing a spike of emissions. But in 2019, as some claimed “billions of people are going to die,” contributing to rising anxiety, including among adolescents, Shellenberger decided that, as a lifelong environmental activist, leading energy expert, and father of a teenage daughter, he needed to speak out to separate science from fiction. His conclusion: “Climate change is real but it’s not the end of the world. It is not even our most serious environmental problem.”

Despite decades of news media attention, many remain ignorant of basic facts. Carbon emissions peaked and have been declining in most developed nations for over a decade. Deaths from extreme weather, even in poor nations, declined 80 percent over the last four decades. And the risk of Earth warming to very high temperatures is increasingly unlikely thanks to slowing population growth and abundant natural gas. Curiously, the people who are the most alarmist about the problems also tend to oppose the obvious solutions. Shermer and Shellenberger also discuss:

Michael Shellenberger is a Time magazine “Hero of the Environment”; the winner of the 2008 Green Book Award from the Stevens Institute of Technology’s Center for Science Writings; and an invited expert reviewer of the next Assessment Report for the Intergovernmental Panel on Climate Change (IPCC). He has written on energy and the environment for the New York Times, the Washington Post, the Wall Street Journal, Nature Energy, and other publications for two decades. He is the founder and president of Environmental Progress, an independent, nonpartisan research organization based in Berkeley, California.