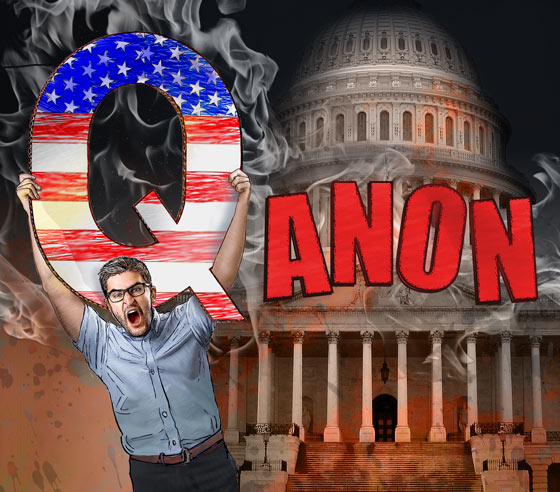 In this cover story article (written in October 2020) for Skeptic magazine 25.4 (December 2020), Daniel Loxton considers the unsavory origins and rising threat of the QAnon conspiracy theory. Written prior to the deadly QAnon-led occupation of the Capitol Building in Washington, DC on January 6, 2021, this analysis exposes the conspiracy theory as baseless, unoriginal, and harmful for believers and society at large.

As 2020 nears its end and the COVID-19 pandemic continues, a rapidly growing far right conspiracy theory increasingly dominates headlines. QAnon is a crowd-sourced online mythology inspired by cryptic anonymous internet posts appearing since 2017 from an unknown figure (or group) known as “Q” or “Q Clearance Patriot.” It is an expanded successor to the debunked 2016 “Pizzagate” conspiracy theory, which claimed that Hillary Clinton and other prominent Democrats operated a child sex trafficking ring under a Washington, DC pizzeria called Comet Ping Pong. QAnon is also rooted in much older mythologies about sinister secret societies of Satan worshippers, witches, or Jews.

QAnon believers hold that our modern world is secretly ruled by a “cabal” or “deep state” of cartoonishly wicked evildoers hidden in plain sight. “Every President after Reagan was one of these deep state criminals,” believers claim.1 Indeed, most “famous politicians, actors, singers, CEOs, and celebrities” are supposedly part of the cabal. For example, entertainers Beyoncé Knowles-Carter, Lady Gaga, and Tom Hanks are all thought to be prominent members. The Obamas and Clintons are supposedly sinister cabal leaders.

These criminals aren’t merely bad, greedy, or ruthless. They’re said to be deliberately, totally, breathtakingly evil. They worship Satan and may be in league with supernatural demons. They systematically abuse, torture, and murder children. They’re pedophiles. They maintain their youth through intoxicating injections of blood drained from children ritually murdered at the moment of maximum terror. The cabal also eats babies.

To maintain power, the cabal controls all mainstream news media and engineers every ill that plagues modern society. As one seductive introductory video2 asks curious viewers,

The idea that Satanists rule the world is a story of Lovecraftian horror in which the normal world is an illusion and a much darker true world lies just beyond the veil. And yet, QAnon believers are more excited than scared. People who “take the red pill” or “wake up” to the claimed conspiracy are offered a simple explanation for all of the world’s problems. They’re also offered a reassuring prediction for a better future:

What if I told you that those who were corrupting the world, poisoning our food, and igniting conflict were themselves about to be permanently eradicated from the Earth?

According to QAnon mythology, an apocalyptic event called “The Storm” will soon cleanse the world and usher in a utopia. The unlikely savior in this story of revelation and renewal is none other than President Donald J. Trump. “Good patriots in the U.S. military” supposedly “asked Trump to run for President so they could take back control of America” from the Satanic overlords. This righteous struggle is the true purpose of the Trump administration. “The world is currently experiencing a dramatic covert war of Biblical proportions—literally the fight for Earth—between the forces of good and evil,” believers claim.1 Clues about the progress of this clandestine war are to be found in “Q drop” posts by the anonymous Q, and in Trump’s more cryptic statements and typos. Critical news stories about Trump are Satanic lies. […]