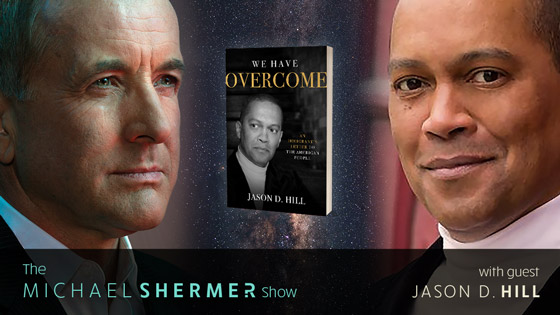 Jason D. Hill — We Have Overcome: An Immigrant’s Letter to The American People

In this episode Michael Shermer speaks with Jason D. Hill, a black immigrant from Jamaica, about his eloquent appreciation of the American Dream, and why his adopted nation remains the most noble experiment in enabling the pursuit of happiness. Dr. Hill came to this country at the age of 20 and, rather than being faced with intractable racial bigotry, Hill found a land of bountiful opportunity. It has been more than 50 years since the Civil Rights Act enshrined equality under the law for all Americans. Since that time, America has enjoyed an era of unprecedented prosperity, domestic and international peace, and technological advancement. But the dominant narrative, repeated in the media and from the angry mouths of politicians and activists, is the exact opposite of the reality. They paint a portrait of an America rife with racial and ethnic division, where minorities are mired in a poverty worse than slavery, and white people stand at the top of an unfairly stacked pyramid of privilege. Jason D. Hill corrects the narrative in this powerfully conversation based on his eloquent book.

How Informed are Americans about Race and Policing?

In this report, we investigate a complex and defining issue of 2020 (and, no doubt, many years ahead): race and policing. Amidst calls to “defund” and reform police agencies, informed understandings of police-citizen interactions are crucial. So, here we ask the question: across the political spectrum, how knowledgeable are people when it comes to the available data on fatal police shootings of Black Americans?