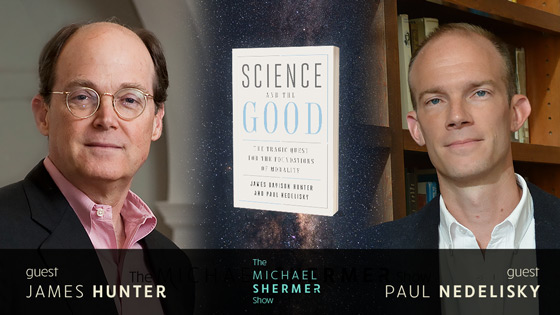 James Hunter & Paul Nedelisky on Religious vs. Secular Morality — Science and the Good: The Tragic Quest for the Foundations of Morality

In their book Science and the Good, professional philosophers James Hunter and Paul Nedelisky trace the origins and development of the centuries-long, passionate, but ultimately failed quest to discover a scientific foundation for morality. The conversation takes a decidedly interesting turn when Drs. Hunter and Nedelisky reveal that they are both theists and that their Christian worldview informs their thinking on moral issues. The three then dig into the weeds of the difference between religious and secular moral systems, the nature of God and morality, why a purely naturalistic approach to morality does not negate religion or even the existence of God (natural law could be God’s way of creating moral values), natural rights and rights theory, consequentialism, deontology, and virtue ethics, progress in philosophy, why philosophers never seem to reach consensus on important subjects like morality, how to think about issues like abortion, why they believe in God and follow the Christian religion and yet reject Divine Command Theory, and much more.