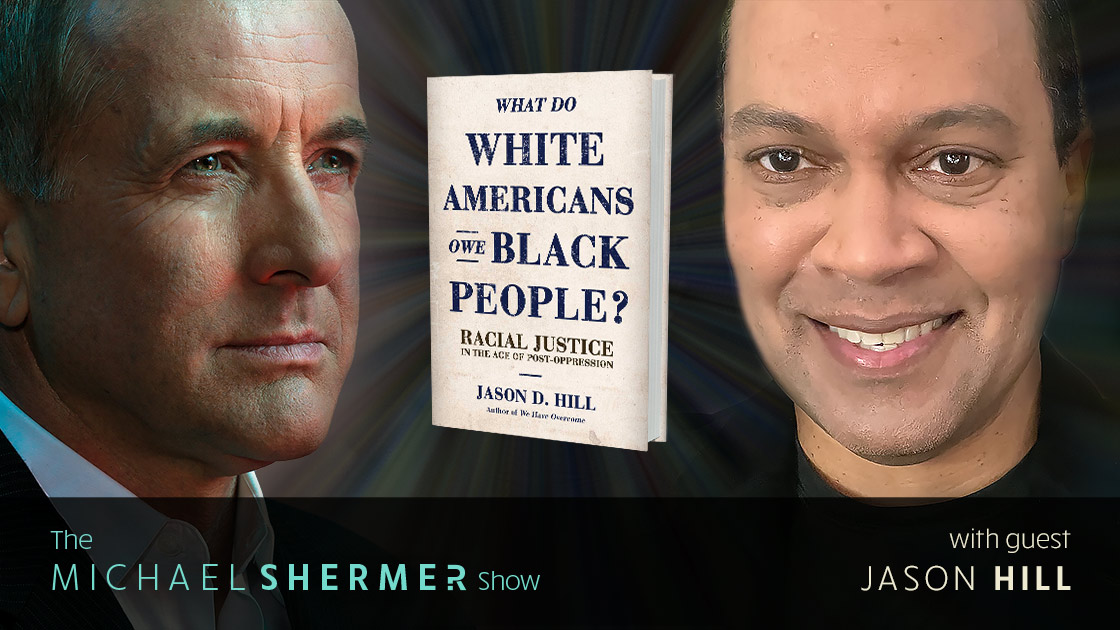 In this conversation with Jason Hill based on his book What do White Americans Owe Black People? Racial Justice in the Age of Post-Oppression, Shermer probes the philosopher on the arguments for and against reparations.

In this provocative and highly original work, philosophy professor Jason Hill explores multiple dimensions of race in America today, but most importantly, a black-white divide which has grown exponentially over the past decade.

Central to his thesis, Hill calls on black American leaders (and their white liberal sponsors) to escape from the cycle of blame and finger-pointing, which seeks to identify black failures with white hatred and indifference. This overblown narrative is promulgated by a phalanx of black nihilists who advocate the destruction of America and her institutions in the name of ending “whiteness.” Much of the black intelligentsia consists of these false prophets, and it is their poisonous ideology which is taught, uncontradicted, to students of all races. It is they who are responsible for the cultural depression blacks are suffering in today’s society.

Ultimately, the answer to “what do White Americans owe?” is not about the morality or practicality of reparations, affirmative action, or other redistributionist schemes. Hill rejects the collectivist premise behind the argument, instead couching notions of culpability, justice, and fairness as responsibilities of individuals, not arbitrary racial or ethnic groupings.

November 26
Liberty Valance and the Rule of Law
The Cowboy Ethic vs. the Law Ethic in fact and fiction

Did the Christmas Story Really Happen? The Birth of Jesus in History and Legend

What can we actually know about the birth of Jesus? How can we decide whether he was born in Bethlehem? Is it possible to reconcile the different Gospel accounts? Was the story of the Virgin Birth a later fabrication? What is the evidence for (or against) the many details, such as the trip to Bethlehem, the visit of the wisemen, and the “slaughter of the innocents”? How many of the most familiar parts of the stories come from later legends?