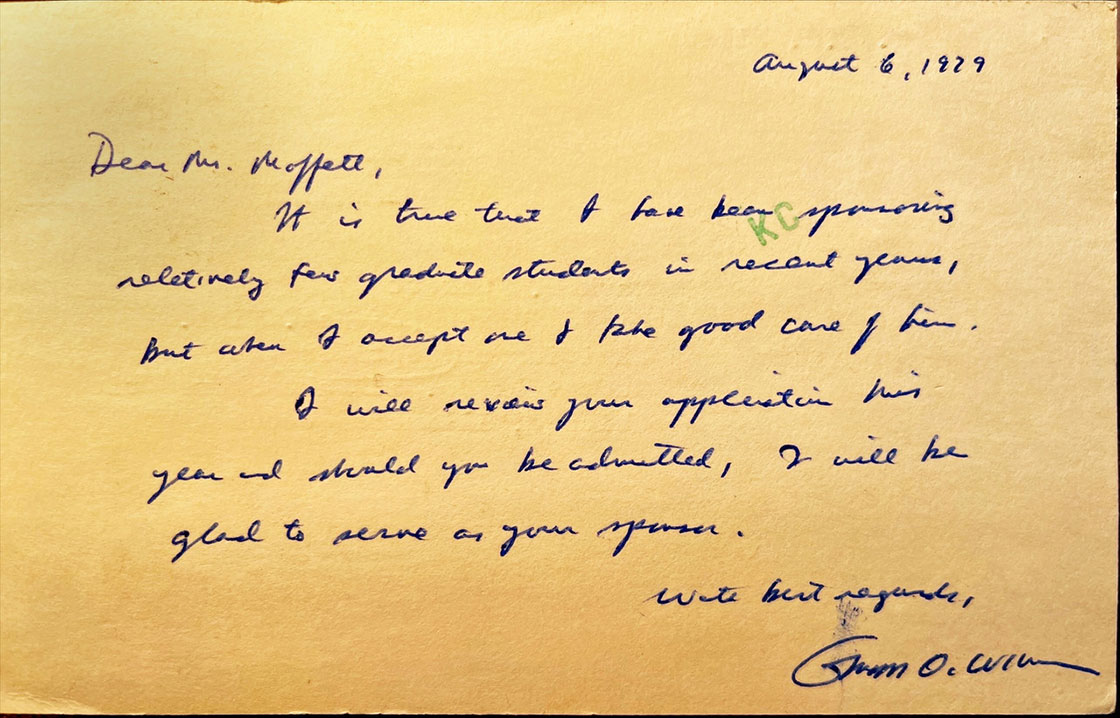 To honor the legendary evolutionary theorist and biologist Edward O. Wilson, who passed away on December 26 at the age of 92, his former student Mark Moffett, pays tribute to his mentor in this deeply moving memoir of his time working with the great scientist.

Above: Edward O. Wilson’s first note mailed to the author, Mark Moffett, in 1979, when Mark was a college undergraduate in Wisconsin.

The loss of the celebrated biologist Edward O. Wilson last week will be mourned by legions of readers for whom his work was a beacon, shaping the public understanding of evolution, clarifying the place of our species in this world, and illuminating the value of biodiversity and the need for a global commitment to conservation. For those who were mentored by him, however, his death means the loss of a staunch ally and cherished friend whose optimism and support has kept us going throughout our careers. It’s impossible for me to imagine living without Ed’s voice in the background which, for me, as for millions of others, first entered my life by way of his writing.

As a junior high school student in the early 1970s I was enticed to join a science book club by the offer of three books for a buck. I was riveted by one of my choices, The Insect Societies, from the day I cracked its cover. The book used a thicket of technical terms like dulosis and polydomy to describe ants, wasps, bees, and termites, and there were exotica on every page. To me, the activities of these insects were as enthralling and mysterious as the lumbering dinosaurs I had dreamed about virtually from infancy.

The dust jacket pictured its author, Edward O. Wilson, in a natty jacket standing in his lab at Harvard University, where he was a professor of zoology. “Mr. Wilson,” the author bio read, “has published more than 100 articles on evolution, classification, physiology, and behavior — especially of social insects and particularly of ants.”

In 1979, in my senior year at Beloit College, a small liberal arts school in Wisconsin, Insect Societies was still my bible. I steeled myself to write a letter to Wilson expressing my admiration for his book, and in his warm, handwritten responses he encouraged me to visit (I still have his note, presented herein, at the top of this tribute).

In the following tribute to Edward O. Wilson, Frank J. Sulloway recounts how the Harvard evolutionary biologist had a profound and enduring influence on his own life and academic career. Wilson, says Sulloway, was the model of a mentor who cared deeply about his students and collaborators. By sharing his infectious love of the wonders of evolutionary biology, Wilson inspired countless others with his impassioned vision about the need to safeguard biological diversity.

The recent death of Edward O. Wilson, a preeminent evolutionary biologist who taught for 40 years at Harvard University, represents an enormous loss for science as well as for the cause of biological conservation he championed so passionately. Ed’s original contributions to evolutionary biology were legion and included, most notably, his groundbreaking research and ideas about island biogeography and his seminal role in launching the discipline of sociobiology, which he did in 1975 with publication of his controversial book Sociobiology: The New Synthesis. Two of Ed’s books, On Human Nature (1978) and The Ants (1990) — the latter written in collaboration with entomologist Bert Hölldobler — won Pulitzer Prizes. Many of his other publications, some of which were intended for the general reader and became bestsellers, set forth Ed’s ideas about biological diversity and the need for its conservation. His innovative career was a source of inspiration to all who knew him, as well as to the huge number of people, scientists and nonscientists alike, who read his many brilliant and wide-ranging books.

When I first learned of Ed’s death I felt a deep sense of personal loss given his extensive influence on my own life and academic career. As a Junior at Harvard I took Ed’s course in evolutionary biology. It was electrifying. In at least one of his lectures he talked about his repeated dreams of visiting oceanic islands and what exciting places for biological research they could be. His descriptions of his dreams, and the lectures he gave about such islands and their various exotic species, were beyond infectious. A crucial element in their magic was Ed’s captivating eloquence, a use of language that bordered on poetry.

One day after class I approached Ed about my idea of writing a Senior Honors Thesis on Charles Darwin’s voyage of the Beagle. His immediate advice was “go to the Galápagos Islands.” He was so enthusiastic about such an expedition that he became my first donor, offering to contribute the equivalent of $3,000 in today’s currency to support the eight-person Harvard-Darwin Film Expedition that I then proceeded to organize. The expedition ultimately required my raising over $200,000 to cover our various travel and filming expenses, but the initial catalyst was Ed’s enthusiasm.

Why Christians and Conservatives Should Accept Evolution

US public acceptance of evolution is growing but is still low compared to other countries. Why? Religion and politics. Here’s why that need not be